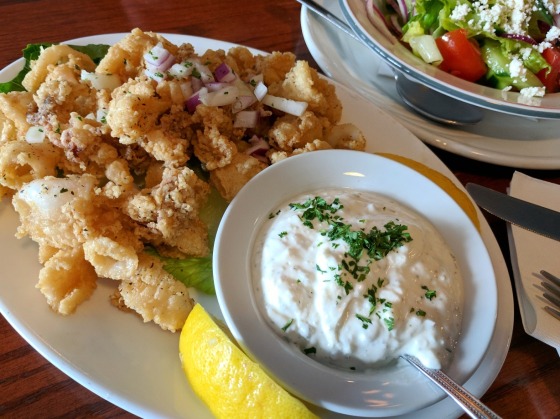 When I was planning a recent date night, I was looking to try someplace new. Cosmos Greek Kitchen popped up as a possibility. When I thought about it, Mediterranean cuisine seemed like just the thing to indulge in, so I made an OpenTable reservation for that evening and we head out to 124 Street between 108 and 109 Avenues for dinner.

Arriving at around 5:15pm on the Saturday, we noticed that the main door led to two separate sides. Cosmos Greek Kitchen was on the right with its sister lounge, Passport Restobar, on the left. Both share the same staff and kitchen (they were quite efficient), and they serve identical food items, but I believe the latter has more of a focus on cocktails.

The interior of Cosmos Greek Kitchen.

We went into Cosmos and found it to be rather quiet initially. However, we were early and, as we dined, the space filled up with more people, including a handful of families with small children. The host/server let us pick our own table while she went to grab menus. Once we settled in, it definitely felt like a comfortable spot for an enjoyable evening.

The two of us decided to go for the Super Combination Platter for two ($70) as it seemed to cover the gamut of menu favourites. Honestly, it did not disappoint in terms of the portions, selection and flavours.

To start, we were served a bowl of Horiatiki (Greek Salad), which consisted of lettuce, tomatoes, cucumber, red onions, crumbled feta, and olives in extra virgin olive oil with dried oregano and maybe a little bit of red wine vinegar for added acidity. Traditionally, Greek salad is made without lettuce, adds green peppers and uses a large slice or chunks of feta cheese. I don’t recall seeing any pieces of pepper in ours and Kirk was hoping for more hefty pieces of feta rather than the crumble. Otherwise, it was still very tasty, light, and refreshing.

At the same time as the salad was served, we were also presented with a large plate of Calamari. The deep-fried rings and pieces of baby squid were beautifully breaded to a nice crisp. The chef managed to keep the meat quite tender, avoiding the sometimes disastrous overcooked chewiness found at other establishments. A squeeze of lemon gave it a brightness on the palate and the house made tzatziki was the perfect accompaniment.

After indicating that we were ready to proceed with the rest of the platter, a huge silver tray was brought over with all of the remaining items for our meal. I will quickly mention that another portion of tzatziki is provided with the combo, but we both felt that it was unnecessary since we still had plenty left from the Calamari dish. Instead of a second helping of that, it would be really nice for them to swap that out with hummus. I didn’t think to ask if that was doable that night, but they might accommodate the request considering that the items are priced the same on the menu. It’s food for thought next time around. Also, it should be noted that pita bread isn’t part of the platter, so you may want to ask about adding that on as an extra.

Dolmathes in the round dish with Chicken & Lamb Souvlaki on the right.

It was difficult to decide where to start with the feast in front of us. I decided to sample the Dolmathes first. Those are vine leaves stuffed with rice and ground meat. They’re then covered in a lemony sauce. I vaguely remember going to a Greek restaurant (probably Koutouki) when I was a late teen and trying these. I think I attempted to unwrap the leaves because I didn’t think I was supposed to eat them. As a Chinese person, I was used to seeing sticky rice cooked in large leaves that weren’t meant to be edible. Knowing better now, I ate the whole thing and it was delicious. I actually didn’t expect it to have any meat inside, but it was a pleasant surprise to find that savouriness offset by the acidity of the creamy sauce on top.

Next up was the Keftedes, spicy Greek meatballs. These aren’t actually spicy in so much as having a kick of heat on the palate. They’re just seasoned with different herbs and spices to give it plenty of deep flavour. The finely ground meat was evenly textured for a nice mouthfeel. These are typically eaten with tzatziki, but that isn’t really needed. They’re good all by themselves.

Keftedes sort of hidden under all those diced tomatoes and red onions with the Spanakopita next to them and big pieces of yellow Greek lemon potatoes.

Spanakopita is one of my all-time favourite Greek snacks. Filo pastry stuffed with spinach and feta is simple, but delicious. This was a recipe I even took the time to make when I was young because I liked it so much. The filo pastry here was golden brown and incredibly flaky. My only issue with it was one end of the pie was all pastry with barely any filling. It was probably due to the folding of the filo to keep everything held inside the pocket. So, it was a big mouthful of thick pastry and none of the spinach or cheese. If they can find a way to make sure the filling is more evenly distributed into every bite, it would be even better.

Chicken and Lamb Souvlaki came with the platter. Often times most people don’t like lamb because of the wildness of the meat. It has a distinct gaminess to it, and when it came to the souvlaki, I found that it was relatively prominent. Nothing that bothered me too much since I often enjoy lamb. But, it was more pronounced and certainly not masked by the herbs used to season the meat. A couple of the pieces of lamb were a bit chewy as well as there was tendon running through. Otherwise, it was fine. In my opinion, the chicken was preferable. Well-seasoned and succulent, these felt like the lighter option when it came to protein.

The Souvlaki with slices of Lamb Souvla stacked underneath.

If you do want to try lamb at Cosmos Greek Kitchen, I highly recommend going with the Lamb Souvla over the souvlaki. A big portion of sliced roasted lamb laid beneath the skewers and it was wonderful. The wildness of the meat didn’t taste as strong and it was super juicy and tender with a fantastic zestiness coming from the marinade. A sprinkle of lemon and a dip of tzatziki made this a delectable treat.

Kirk and I loved the Moussaka, a layered casserole of potato, eggplant, and ground beef topped with béchamel sauce. It’s a really rich and filling dish, but it’s worth the calories. We especially appreciated the use of cinnamon (my go to spice) for the sweet-spicy combo that came through with flying colours. It elevates the dish into something special.

The final item on the platter was the Greek lemon potatoes. Kirk said he thought they were boiled and then roasted to get them as tender as they were. Either way, these were amazing. The potatoes were saturated all the way through with lemon and herbs. The flavour was in every single bite and I couldn’t get enough of them. It was literally the last thing I chose to eat from our main meal because I wanted to remember that taste. 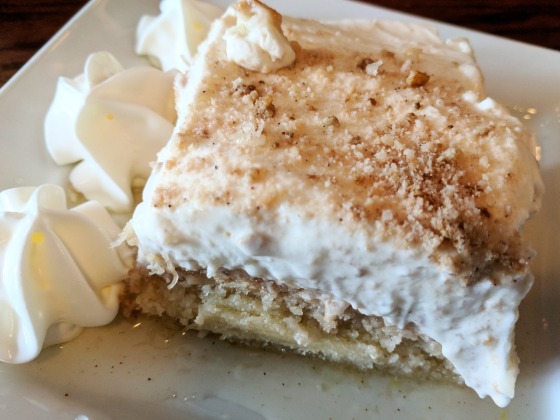 Having sampled a little of everything in our combo, we finally called it and asked the staff to pack up what remained for leftovers (we had enough for another lunch and dinner for two). However, I wasn’t done. Since I was already there, I decided to go for dessert. Although my stomach had little room, I managed to pack away the majority of what I think is something like a Kadaif (I missed the name when the server was listing out the options). It was sold to me by being described as similar to coconut cream pie. Turns out that it was layered with a crust, finely shredded filo pastry, and whipped cream. A sweet syrup covered the plate. Not quite what I pictured, but it was still pretty good. I probably wouldn’t get it again as I wasn’t a fan of the overall texture. Yet, I’m glad that I opted to try something else other than the typical Baklava.

If you’re looking for a friendly Greek restaurant with, for the most part, authentic dishes, check out Cosmos Greek Kitchen. Don’t hesitate to order that super combo platter. The portions are worth the price and you’ll be basking in Mediterranean heaven for at least a couple of days, maybe more.

Happy 7 month wedding anniversary to my "husby" forever. There's no one else I'd rather be stuck in a house with every day. ❤️
Just working my way through whatever we have available at home. I think I ate almost half the litre tonight. Cinnamon ice cream with cookie dough and Skor bits! It's my fave. #icecream #marbleslab #dessert #sweettreat