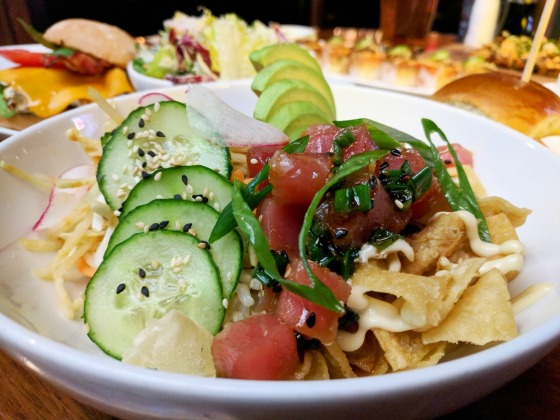 This weekend, Kirk and I ventured out to the JOEY Restaurant at Bell Tower. Located a couple of blocks from Rogers Place, it’s in the heart of the Ice District and it’s an ideal venue for pre-game gatherings.

The lounge at JOEY Bell Tower.

Part of the JOEY Bell Tower lounge with the dining room and kitchen in the background.

While it’s incredibly dim inside, the design of the venue is beautiful. The two of us especially admired the indoor patio with it’s ball light fixtures, fireplace, rolling windows (closed during winter), and floor-to-ceiling wine cooler. Despite our love of that room, we ended up seated in the lounge alongside the brick wall, which has large hidden projector screens that are lowered when sports are on. The illumination emanating from those helpfully brightened my photos in the otherwise dark space.

Full disclosure before I continue, we were invited through my YEG Food Deals Instagram page to try JOEY’s revamped happy hour menu. It was launched right at the beginning of 2019, and it’s been heavily revised from their previous offerings in order to compete with the other two big players in the casual fine dining sphere, Earls Kitchen + Bar and Cactus Club Cafe. Both of those chains have been serving rather extensive happy hours for at least the better part of the past year, if not longer. JOEY Restaurant, on the other hand, had a very scant menu in comparison (a mere four or five drinks and maybe three food options). 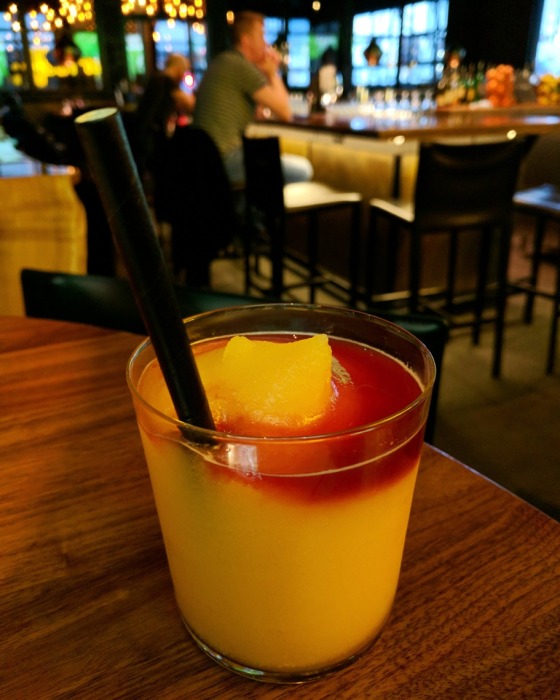 On this occasion, JOEY Bell Tower took care of our first round of drinks. Everything else was ordered at our own discretion. As such, to start, Kirk ordered the JOEY Genuine Draft ($3.50) and I got the Real Peach Bellini ($4.50). The Bellini is a longtime staple, and a great cocktail that is cold, refreshing, sweet, and a touch tart. Kirk found the JOEY Genuine Draft to be a decent standard lager. To follow-up, Kirk tried the Parallel 49 Wobbly Pop Pale Ale ($4.50). Although the amber-coloured beer was hoppier, something that Kirk typically enjoys, it wasn’t for him as he found the flavour to be too soapy.

The majority of the items on the daily happy hour menu are discounted anywhere between $3 to $6 each from the regular prices, meaning the savings can be significant. If you’re okay to eat there during the hours of 3:00pm to 6:00pm or 9:00pm to close, then it’s well worth planning around those times. We considered this to be a fun night out for the week. Therefore, we decided to go to town with our meal. 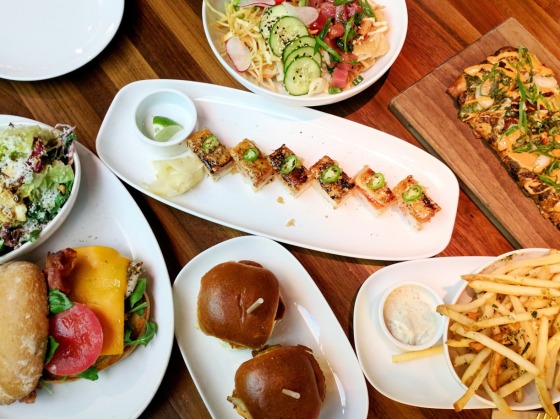 We know no limits when it comes to happy hour.

Sharing is caring, so we split the Rosemary Garlic Fries ($4), Sliders Royal Duo ($8), Pesto Shrimp Flatbread ($10), California Chicken Club ($13) with fries substituted for a New Cobb Salad ($2), Seared Salmon Sushi ($13), and the Tuna Poke Bowl ($16). Technically, the last one was for me, but I offered some of the non-raw portion to Kirk (he declined).

This was a ton of food for a pair of people, so don’t order this much unless you genuinely want or need leftovers. In my case, I had half of a sandwich and two slices of flatbread for lunches this week. I also saved the majority of the rice, veggies, and wonton chips from the poke bowl to go with one of my at home dinners.

I’ll begin reviewing based on our least favourite dishes to the ones we enjoyed most. Sadly, the Rosemary Garlic Fries were a miss for us. On the plus side, I found that the taste was amazing. The herb was heavily infused into the potato and the garlic wasn’t overpowering. The grainy mustard aioli provided for dipping was particularly delicious. What I didn’t like, and never really have at JOEY Restaurant, is the skinny cut fries. I’m not sure why they continue to insist on making these. They’re similar to McDonald’s fries, but, dare I say, worse. They always seem so dry, and they’re completely bland without the accompaniments.

The California Chicken Club is usually one of Kirk’s top picks at JOEY. However, it seemed as though the recipe had been changed slightly. The well-seasoned breast of chicken was still stacked with aged cheddar, smoky bacon, and spicy mayo. It contained some greens, too. We think it was spinach. Yet, the sandwich was missing the basil leaves that used to be included, which meant the pepperiness and hint of anise/mint was now gone. The aged cheddar wasn’t melted either. I would have preferred it to be heated and gooey rather than cold and speckled with condensation when it arrived at our table.

Side of New Cobb Salad

We replaced the side of fries to our club with the New Cobb Salad (actually, we had asked for Caesar salad, but this is what we received). I appreciated the combo of romaine and shredded kale and the Grana Padano dressing. I thought that the crispy bits inside the salad were croutons, but they may have been chunks of double smoked bacon (the taste wasn’t all that salty though…). There was also no egg, so that’s why I honestly assumed we were having a Caesar salad as requested until I saw our bill at the end of the evening.

Squeezing lime juice over the Seared Salmon Sushi for some zest.

As you may have gathered above, Kirk is not really into raw fish. While he did take a chance here and ate a whole piece of the Seared Salmon Sushi, he opted not to have anymore. I finished off the rest of the dish by myself. In Kirk’s opinion, it tasted too fishy as if the salmon wasn’t fresh enough. I begged to differ. From past experience, I know that different types of salmon have very distinct flavours. To me, this did have a stronger fishy flavour, but not in a way that tasted off and inedible. It was still good. The torched umami sauce on top gave the fish a creamier consistency, and the shaved slice of serrano pepper atop each piece of sushi added a touch of spice on the palate without being overwhelming.

The Sliders Royale Duo is a super basic pair of miniature burgers. Other than a thinly sliced pickle, there were no other groceries. Admittedly, I took out the pickle when I realized it was there. I’d already bitten into it, so I can say that it wasn’t as strongly flavoured as others often used on burgers. I probably could have gotten away with eating this one and refrained from disgust. More often than not, I find pickles ruin the flavour of everything else because it’s the only thing you can taste after. With that removed, just a bit of American cheese and a dollop of secret sauce was left behind. The beef patty wasn’t that thick, but the meat was juicy and wonderfully seared. Simple and satisfying.

On my part, I thought that the Tuna Poke Bowl was great. It’d definitely be a filling dish should one choose to have this as their main. It’s created with a mix of brown rice, green papaya slaw, crispy wontons, edamame, tomatoes, radishes, cucumber, avocado, and diced sashimi grade ahi tuna. Drizzled with miso dressing, it’s potentially one of the “healthiest” items you’ll find at JOEY Restaurant.

Both of us agreed that the Pesto Shrimp Flatbread was the best item we sampled. At first glance, I was worried that the dough had been overcooked as it looked past golden brown. Nevertheless, upon my initial bite, I was met with a pleasantly crisp exterior and fluffy middle. Laid with whole milk mozzarella, sun dried tomatoes, plump shrimp, chipotle aioli, and ribbons of basil, it was like a flavour explosion in every mouthful. For the price during happy hour, it’s perfect for a light late lunch or early supper.

I have to say that the service at this particular JOEY Restaurant is not ideal. We had multiple staff stop by to check on us, but it was hard to attract the attention of our own server when needed and it took three asks for water before we finally got some. Still, when it comes to the updated happy hour menu, it’s much improved from their earlier iteration. With an increased number of choices available (a dozen beverages and over 20 food items), there truly is something for everyone now.