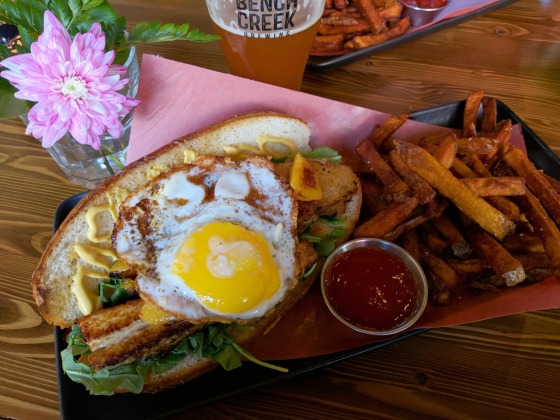 Closing amid allegations against one of the previous owners, the space once occupied by The Needle Vinyl Tavern (10524 Jasper Avenue) sat unused since November 2017. Then, on June 25, I received an email from Station on Jasper. They were a new business and they had inherited the Needle’s existing email list upon purchasing the restaurant/music venue. With the introduction came an offer for $12 off during dinner when dining in July.

I held onto the coupon and with one weekend left before it expired, I dragged my fiancé, Kirk, with me. I thought it’d be a good excuse to try it out. From what I could tell, the menu had been revamped since the Needle’s time. Back then, the food was pretty subpar. Now, the listings looked to be promising.

We arrived at around 7:00pm on a Saturday night. It was empty inside, although their patio was definitely being utilized. We seated ourselves indoors just shy of the patio to get the fresh air without the crazy heat. Our server came over with menus and started talking about happy hour before realizing that it was actually too late for us to order any specials. Still, I asked her what they usually offer during that time, so I could make note of it for my YEG Food Deals pages. She admitted that they didn’t actually have anything solid in place yet. 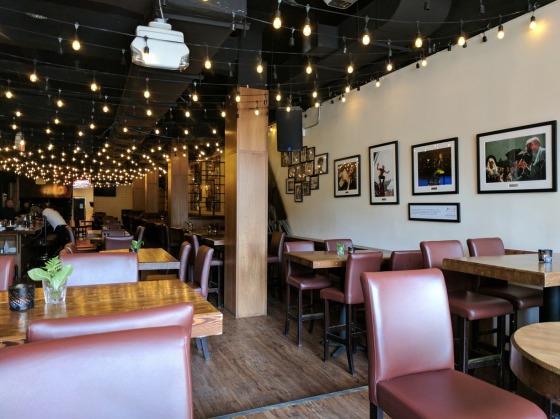 The interior of Station on Jasper has a kind of indoor-outdoor feel with the lights.

It turns out that when the business transferred over to the new owners, they literally hired all staff within a two week period, set a date and opened their doors. As I soaked in my surroundings, I could see that the design of the bar and restaurant was largely unchanged. The exact same tables, chairs and setup as before were being used. As I mentioned, the menu was visibly different, but the drink selection was fairly scant with them sticking only to classic cocktails.

Personally, I found the pricing for the dinner mains to be a bit high. Instead, I focused on the rest of the comfort food by way of the south menu created by executive chef Michael Darby. With a variety of sandwiches and pizzas at relatively affordable prices, they were the more reasonable option. Kirk got a local beer on tap ($6.19) and the Station Burger ($14). I opted for the PB&J Firebread Sandwich ($12).

Johnny Lee, one of their bar managers, spoke with us and he said that the Station Burger was probably the most simple thing on the menu and suggested Kirk order the Po’ Boy next time. Johnny wasn’t wrong. The burger had been changed from being topped with candied bacon, caramelized onion, smoked Gruyere and Station Sauce to cheese, mixed greens, sauce and a few grape tomato halves. There was still a decent flavour to the meat. Nevertheless, it wasn’t what we had hoped for. Having stated that the patty is made of hand-formed Alberta beef, we thought it’d be freshly pressed. While it wasn’t necessarily a mass produced frozen burger, it clearly didn’t meet our expectations and could have used more charring. On the side, the blanched fries were decent. These are supposedly hand-cut and that seemed to be the case.

Their PB&J Firebread Sandwich fared better overall. The long toasted bun was laid with arugula, seven spice blend pork belly, a sunny side up egg, grilled peaches and some sort of aioli. I tend to shy away from toasty bread because I often scrape my mouth with the sharper edges. This was alright though. It held the components of the sandwich together well. To avoid a huge mess with the egg, I broke the yolk first and then cut the whole thing in half, spreading it out across the length of the bread. Then, I clamped it shut. This item has a lot of potential. Sure, I felt the pork belly was a tad too fatty in spots, but it was seared nicely and the saltiness was balanced out by the bitter greens and sweet peaches. My one big criticism to the kitchen was that the grilled peaches were too chunky. They fell out when I took bites, so I suggested that they create a peach chutney instead. It’d allow for the flavour to come through in every bite rather than sporadically.

After we finished our meal, Johnny came back to chat about the dishes and their quick opening. He then took the time to show us the music stages, including the main venue tucked in a side room towards the back. It’s a neat tiered space. Between that area and the back of the main dining room, they can apparently accommodate up to 400 guests per show. Johnny also excitedly told us about their plans for a hidden speakeasy, which I’m interested to visit when it gets up and running.

When it was announced Station on Jasper would be opening at the end of June, there was speculation that the previous owners were still involved with the new business . However, that has since been refuted. Mark Chisholm, their other bar manager, also introduced himself while we were there. Both Johnny and Mark are a hundred per cent invested in seeing Station on Jasper succeed. They especially want everyone who works there and who comes through their doors to feel protected. All of their staff have to go through regular mandatory training through their partnership with the Sexual Assault Centre of Edmonton (SACE), so staff are not just aware of their own actions, but are also knowledgeable enough to spot situations that may arise with patrons. It was great to hear that they’re taking the steps to ensure that their business remains a safe place for everyone.

Station on Jasper was also able to sign on a number of big name Canadian artists like Serena Ryder and Lights for their launch, and they have a roster of other performers coming through the venue later this year. If they were in any way connected to the tarred reputation of the Needle, I’m pretty certain that information would have come out by now and they wouldn’t have been able to successfully book the shows that they have.

Walking out that night, Kirk and I felt that Station on Jasper was on the right track. They’re beginning to solidify their space in the community by booking as much local talent as possible. They’re working with neighbouring businesses to help highlight musicians in any way they can. Most of all, they want to be there to nourish Edmontonians through their stomachs and their musical souls. We wish them the best of luck!