The exterior of Silk Bar Kitchen includes an inviting patio.

Edmonton has welcomed a number of new restaurants this year. One of them is Silk Bar Kitchen on 105 Street and 103 Avenue. Owners Cory Allen and Stephan Zaiffdeen, along with chef Earl Briones, were inspired by the historical Silk Road, a trade route connecting Asia to the Mediterranean.

Stepping into the space for an early Friday night dinner with a friend, it was empty. We were the first guests that evening, and we were told we could sit anywhere we liked. It’s a tad dark inside, but once my eyes adjusted, I was able to appreciate the design. Rather elongated, they’ve put booth seating on a raised platform to the left of the door, taller tables alongside a glass partition, a few standard tables at floor-level, and the usual chairs along the bar. 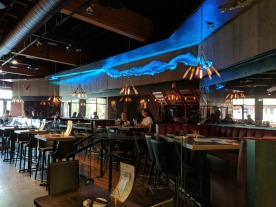 Art plays a big part in the design of Silk Bar Kitchen.

The hallway near the washrooms is decked out with a huge mural.

The style is a mix of vintage (lighting), modern (exposed ceilings) and extravagant (mirrors galore). They also place a spotlight on art, including a huge lacquered mural towards the washrooms and interesting wooden panels running along the upper back wall that depict the city and the North Saskatchewan River down the middle. Not everything made sense side-by-side, but I could tell that there was definitely a lot of thought put into the overall look.

Seeing as how Silk Bar Kitchen offers happy hour from 5:00pm to 8:00pm every Tuesday to Friday (also Saturday & Sunday from 12:00pm to 5:00pm), it was an excellent opportunity to take advantage of the specials. At discounted prices, we figured we’d be able to sample several items to get an idea of what they were about.

Available only during happy hour are their Ryojitos ($12). This is their bar’s take on the mojito. A mix of Havana Club, rosé, coconut sencha syrup, bitters, and fresh lime and mint, it was, visually, a gorgeously layered beverage. When they were dropped off, we were told to ensure we stirred them up well to get the proper flavour throughout. My friend seemed to really like it. Personally, I felt it left too much of a bitter taste in the back of my mouth. Letting the ice water it down a bit as it melted helped. Next time, I may go for one of their other cocktails (I’ve got my eye on the Two-Way Street), which are also $2 off between those hours.

When it came to the food, my friend opted to try the Mini Masala Flatbread ($7). I wasn’t sure what to expect when they put the word “mini” in the name. I mean, I’ve been to Earls and ordered their 8-inch margherita pizza from their happy hour menu before. Needless to say, it was nowhere near the size listed. We were lucky if it actually measured five inches in diameter. In the case of Silk Bar Kitchen, they fared much better. The thin-crusted flatbread was sliced into several pieces and laid on a long rectangular plate. There was no meat on it, so this is a decent option for vegetarians. While I don’t enjoy cilantro, the rest of the toppings — onions, masala spiced Spanish spread paneer, and golden turmeric glaze mango chutney — popped on the palate, especially with the strong, saturated sauces. 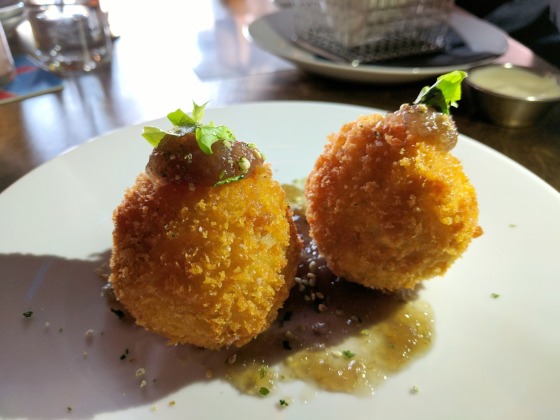 The two of us also shared the Bacon Croquettes Duo ($7). These are balls of mashed buttered Kennebec potatoes combined with bacon and parmesan. They are then lightly breaded and fried before being served with onion jam. I could have done with more bacon as I don’t think that component shone through enough. Still, these were quite tasty. Yet, I do wonder how much money we saved by selecting them off of the happy hour menu. Regularly, the dish is $13, and I would hope that would come with more than a pair of croquettes. Otherwise, the value isn’t really there. 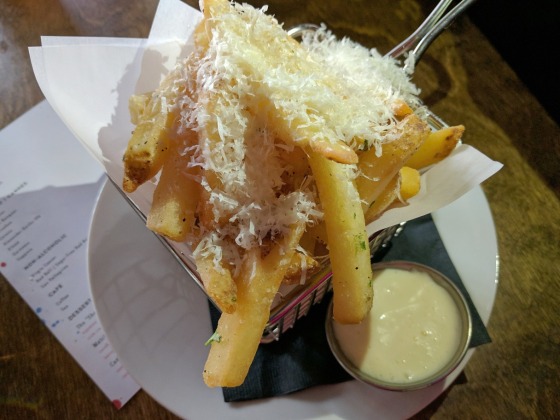 We also split a small basket of the Garlic Parmesan Fries ($4). These were pretty standard. The fries were nice and crisp having been cooked with garlic infused oil. They were lightly dusted with herbs and then doused with grated Parmesan. For dipping, a side of lemon garlic aioli was presented. This is a great choice as a light snack. 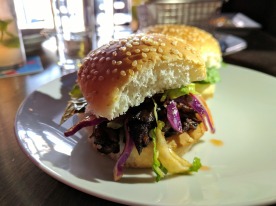 I also decided to try both of the sliders: Char Siu and Meatball ($4 each). The same type of sesame roll sandwiched the meat in each one. The shredded pork in the Char Siu slider was almost black in colour. While it tasted fine with the sweet soy aioli and the coconut lime slaw, I would have preferred a more significant amount of meat like a slice or two of pork and an infused barbecue flavour. Between the two, I found the Meatball Slider to be better. The angus beef had a nice sear to it and it was simply stacked with arugula and crispy onions. What took it up a notch was the garlic oregano aioli and the tomato relish, giving it a touch of sweetness to balance out some of the bitterness.

Dessert was already on my mind prior to dinner. I had it set on their Matcha Cheesecake ($9), which I’d seen pictures of on their Instagram feed. While it was good for a general cheesecake, I think it needs work to truly be considered a matcha dessert. My initial reaction was that it didn’t look like what they had shown me online. The white chocolate ganache was scant and it didn’t actually come with any ice cream. The cheesecake was barely green and the matcha could barely be discerned. The rest — berry coulis, sugared berries, honeycomb, and cornflake crust — was all there though. The crust was different and worked well with the cake, and the berries were delicious. However, the berries on top of the honeycomb kind of made the latter soggy pretty quickly. Honestly, this could be an amazing finish to dinner with a few minor tweaks.

After sampling these items, I think that Silk Bar Kitchen certainly has potential. The choices here are at least equal to other elevated bar fare found around downtown Edmonton. There are also inklings of inspiration when it comes to the flavour profiles of certain dishes. My interest has been piqued enough to make me want to revisit. Based on the menu descriptions, their larger plates definitely sound promising. I just hope that business picks up for dinner (before the DJ starts spinning later in the evenings), so that they’ll be around long enough for me to go back.