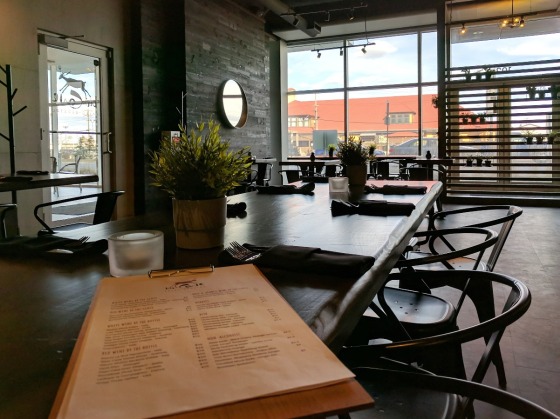 The interior of The Cave Paleo Beastro.

Having been diagnosed with Crohn’s disease, my friend has had to transform her diet over the last few years. For the most part, she’s stuck with eating gluten free and paleo. Therefore, when it came time to celebrate her birthday this year, she selected The Cave Paleo Beastro (6104 104 Street) for a group dinner.

It’s a relatively new restaurant that just opened late-fall 2018, so at the time of our visit, it’d been in business for a little over eight months. We had a large party of about twelve people and our reservation had been shifted from a later dining time to an earlier meal at around 5:30 PM.

Kirk and I were the first to arrive and made mention of the booking. The staff pointed out a long table that was set up in the middle of the space, so the two of us seated ourselves. However, after a few minutes, we were asked if we were too early for our seven o’clock dinner. Turns out they had misplaced an email confirming that our reservation had been altered. The good thing is that the restaurant wasn’t busy, so it’s not like they double booked another group in.

We were honestly hanging out at The Cave for probably close to an hour (waiting for one or two latecomers) before we finally ordered our food. Drinks among the table included a lot of raw and biodynamic wines, both by the glass ($9 to $12 each) and bottled ($50 to $82). 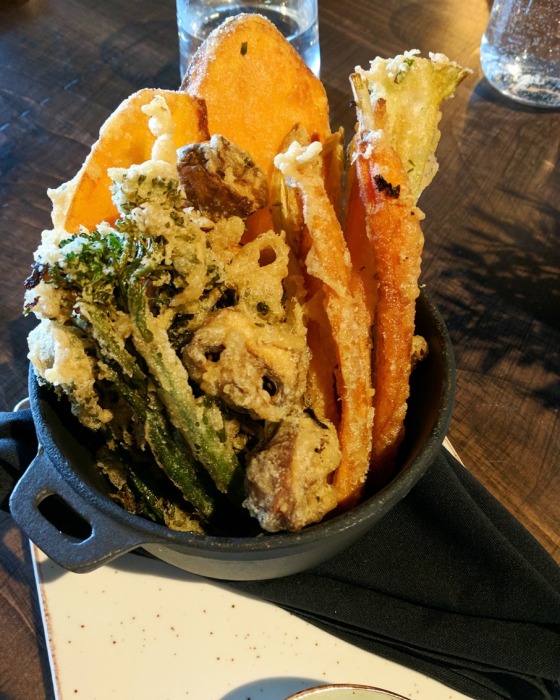 The only appetizer we tried was the Vegetable Tempura ($14) because our guest of honour was nice enough to share her order. It was one of the only things actually served warm the entire night. The mix of veggies included lightly battered and crisp broccolini, carrots, mushrooms, and yam. On the side was a gingery ponzu sauce for dipping. Overall, it was a pretty satisfying snack and all of us that sampled it seemed to enjoy it.

Yet, when it came to the main dishes, the wait was really long (I don’t think we ate until 7:30 PM). The Cave kitchen is open, so we could see that there were only one or two people working. I guarantee that they waited until pretty much everything was ready — one friend was served well after the rest — before bringing our meals out. That meant our food was probably sitting (in a fairly chilly venue) and that’s why, at best, each plate was lukewarm. Additionally, a few of my dining companions complained of small portion sizes, overcooked beef and duck (I still believe that my friends should have said something while we were there; the staff can’t fix things, if they don’t know about the issue), as well as a flavourless Scallop Crudo ($18).

When it came to presentation though, I thought that the chefs did a nice job. The veggies were always used to provide a pop or contrast of colour. The fondant potato wedges on one of the Strip Loin ($42) plates alone was beautifully arranged in the shape of a flower. Despite those types of details, everyone I ate with couldn’t look past the shortcomings listed above. 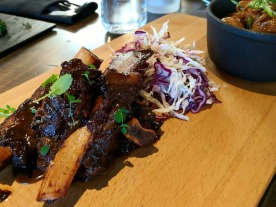 I, on the other hand, thought it was a bit better compared to the group consensus (I rated the place a 6.5 out of 10). I only got a couple bites of Kirk’s Beef Rib ($32). While it wasn’t hot and more meat would have been nice, I found the beef to be succulent, well-seasoned, and tastily charred. Out of the whole dozen people at our table, I was the only person who ordered the Lamb ($29). I think I got the most bang for my buck because I was served three thick rounds of perfectly prepared roasted lamb atop rutabaga and seasonal veggies (squash and carrots). The lamb had zatar spice rubbed on the exterior, which slightly saturated the meat while still allowing the natural flavours to come through. Perhaps Kirk and I just lucked out with what we ordered at The Cave versus everyone else, but I thought the meal was decent other than the temperature of the dishes.

Dessert also seemed to be hit or miss at the table. The Lemon Betty ($10) was comprised of lemon curd, almond crumble and meringue layered in a jar. It was described as very tart and fishy as if those Omega-3 eggs had been used. Others who tasted the dessert didn’t seem to be able to pick out that particular flavour, but my friend was adamant that it was there. I’ll chalk it up to her really sensitive taste buds and the fact that she knows that Omega-3 eggs taste that way (I’ve never had them before). 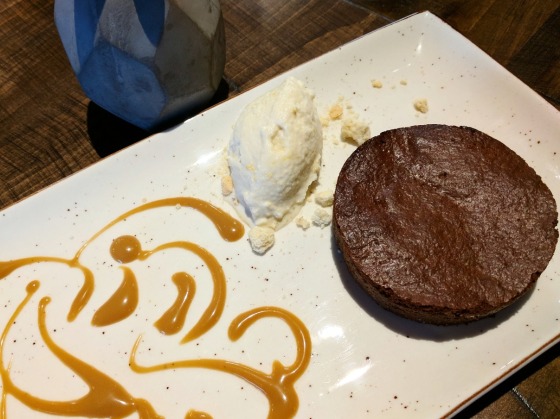 Regardless, I can say with confidence that the restaurant makes a great Chocolate Brownie ($10), which actually came out sort of hot! It’s a shareable size, good for a couple, with that slightly chewy edge and soft middle. A light caramel sauce decorated the plate and a scoop of refreshing lemon gelato accompanied the rich chocolate to create a nice balance.

I’m not completely writing off The Cave Paleo Beastro based on this single experience. For all I know, returning for dinner as a duo might change things entirely. From what I could tell, on a Saturday night, this south Edmonton eatery wasn’t busy, and that’s probably part of their problem. The kitchen and the staff likely aren’t used to catering to larger groups during regular service. If they want to stick around and make a better impression in the future, that’s something they’ll have to improve upon.

I’d like for The Cave to be a place people want to hang their hat.