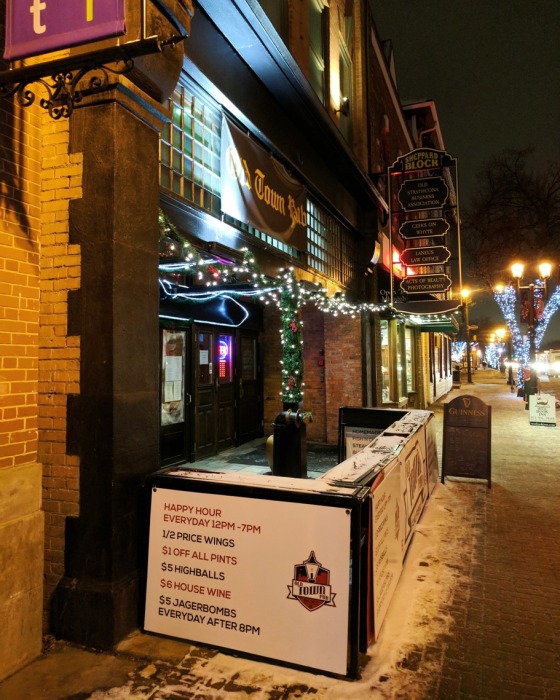 Long before Old Town Pub rolled into the building on 10314 82 Avenue, Elephant & Castle was housed there. Although I had never been to that particular location, I had friends who basically called it their second home. When it was shuttered, they were devastated.

However, when one door closes, another opens. In August 2017, the new owners introduced Old Town Pub. I didn’t visit until this this past fall when my friend and I attended a Paint Nite event, but it was better than I expected.

For that first dinner, we went straight upstairs to the second floor to grab a table, which worked out well considering our event was taking place in that area. The furniture doesn’t look like it’s been updated in decades. Otherwise, the venue was clean and retained somewhat of an Irish pub feel. The wall we were seated next to was adorned with a couple of dart boards. Additionally, a foosball table and a pool table were available for use as well.

The service was somewhat slow though. It took a while before we were checked on, but the server was friendly. As advertised on social media, the majority of the Old Town Pub menu really is priced at $10 per item. Where they get you though is on the extras. Adding meat or making any sort of upgrades to your pierogis will run you at least a few more bucks. Still, it’s fairly affordable and an interesting business practice that I’ve yet to see anywhere else.

On that occasion, the two of us shared an order of the Pretzel Braids ($10). They were made in-house and the plate came with three decently sized twists. The bread was golden brown and lightly salted. They were also nice and soft. There’s nothing I hate more than a dry, overcooked pretzel. For dipping, the pretzels came with a small plastic cup of house beer cheese. Overall, these were delicious. I just wish that it came with more of the dip as we had to be meager with it.

Both of us ordered side salads. The large is $10, but a small is $5. My friend went with the Tossed Green Salad: romaine and iceberg lettuce, red onions, tomatoes, cucumbers, and her choice of dressing. I opted for the Caesar Salad: romaine lettuce, croutons, bacon bits, Parmesan cheese, and dressing. Between the two, the Caesar looked to be more generous in size. I found it to be quite satisfying with a decent amount of dressing, bacon, and cheese, and I was pleasantly surprised at the portion. 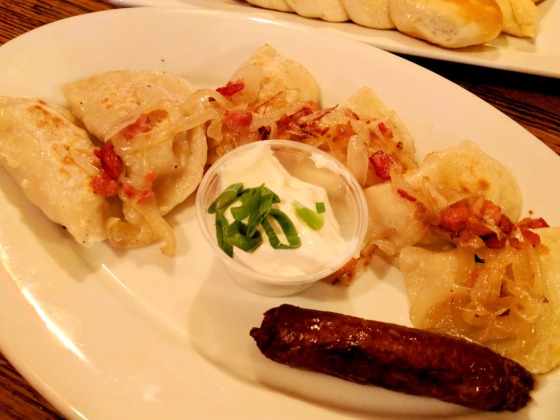 We each had a Pierogi Plate ($10) for dinner, too. Pan frying was $1, sour cream was $0.50, bacon bits were $2, and a small sausage was $1. All in, it came to $14.50 for six wonderful potato and cottage cheese dumplings (they also have a Montreal smoked meat option). I was recently told by one of the staff that two Ukrainian babas come in every week to hand make every single pierogi and it showed. They definitely seemed to be made from scratch. 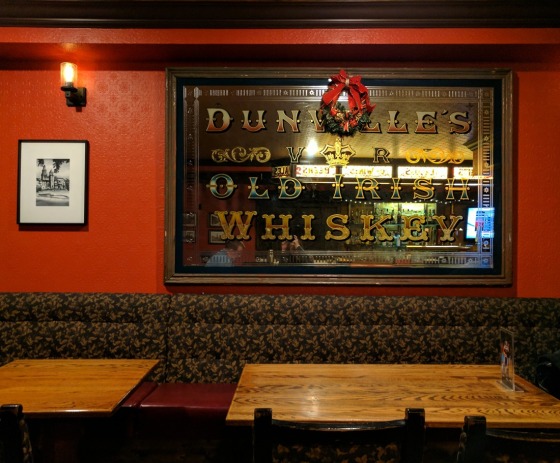 The lounge area on the main floor.

In the new year, I took Kirk to Old Town Pub to use up a Groupon before it expired. This time, we decided to hang out near the bar. It’s definitely not as spacious as the second storey with several tables crammed onto a raised platform. It was cozy though. I was facing towards the kitchen, allowing me a good view of a TV and a large projector screen where that night’s Oilers game was being shown. We even stayed until the end of the third period to see if we might be able to win the draw for tickets to the following week’s home game. Our odds were high most of the night as the place was next to empty. However, we were thwarted by someone who literally came in at the last minute.

Loss aside, we had a great time. Turns out that Old Town Pub has happy hour every day from noon until 7:00pm. It includes specials on wings, pints, highballs, and wine. Kirk was able to get a couple of Yellowhead pints for $5 per glass as well. 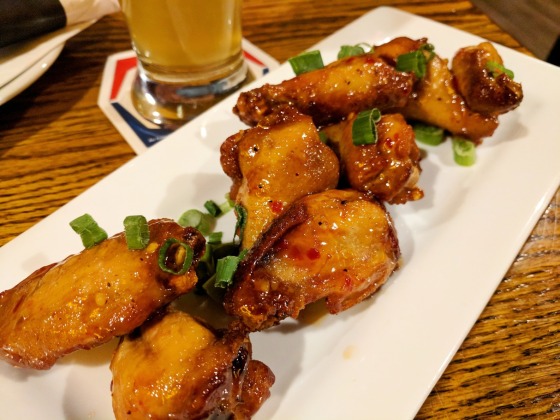 Since they were half price, we split an order of the Sweet Thai Chilli Chicken Wings ($5). These looked to be cooked all the way through as the meat was white. Yet, we both thought they could maybe have used an extra minute or two in the kitchen. Maybe it was the texture of the meat that wasn’t the greatest, and there were a couple that were quite bloody inside (super veiny?). Nevertheless, the flavour was tasty, and we were fine in the end.

I selected the Smoked Chicken Panini ($10) as my main. It typically comes with fries or a tossed green salad. I chose to get the Beer Cheese Fries ($3) instead. The fries were blanched and then covered with the same beer cheese dip that came with the pretzels I’d eaten previously. They were then topped with diced tomatoes and green onions. Not bad, but the dip cooled off quickly and, again, they were scant with the cheese. Ultimately, I ate half of my fries with regular ketchup and a bit of the mustard that Kirk got on the side for his burger.

The sandwich was decent as the grilled ciabatta bread had a crisp exterior, but remained soft on the inside. When it came to the chicken, I didn’t feel like the meat was smoky enough. The mozzarella, garlic aioli, roasted red peppers, and caramelized onions is what saved this. Without those, it would have been pretty bland.

Kirk’s OTP Burger ($10) was amazing! I had minor regrets and wished I had gotten a whole one to myself. Rather, I managed to snag just a couple of bites. He had bacon added for $2. It was definitely a dirty diner-style burger. The obviously hand smashed ground beef patty was super juicy; the meat was perfectly seared with that charred grill flavour infused into it. The fixings were the standard mayo, tomato, and lettuce on a white burger bun. Very simple, but incredibly well-made. Our only issue with the burger was that it fell apart quite easily, so hold on tight to it.

To complete our meal, we had the featured Guinness Cake ($8) for dessert. It took a while for it to come out. Apparently, they were out of whipped cream, so they made a whole new batch just for us. The cake was dense, but far from sweet. It just had that dark chocolate flavour without all the sugar. Quite good, actually.

Honestly, I’m fairly impressed with Old Town Pub. I’m not entirely sure how they can profit with the model they’re using. When other businesses are constantly increasing costs to their patrons, Old Town Pub is really trying to be accessible to their customers while providing handcrafted food, and that’s something I can get behind.