Our table of food on our first visit.

Around for less than two months, Aarde, headed by Chef Guru Singh, is located near the Ice District at 10184 104 Street right in the heart of downtown Edmonton. The menu is inspired by his travels across Europe with regionally influenced cuisine being presented using locally sourced ingredients.

My first visit to the restaurant was a spur-of-the-moment decision. After my friend and I were done perusing the pieces at an art show, we were hungry, so we opted to check out Aarde. It had opened about ten days prior. Even without a reservation, it didn’t seem to be a problem to get a table. Granted, it wasn’t the ideal table. With seats situated immediately to the right of the entrance, we were greeted by a breeze every single time someone went through the door. Our food quickly cooled because of that.

Still, we enjoyed our meal. Although they look to have a great cocktail program (based on images I’ve seen on Instagram), I chose to go with water that evening. Instead, I focused on the food. As suggested by the server, we shared a few dishes, including the Crispy Cauliflower ($11), Mushroom and Artichoke Tartine ($11), Duck and Cornbread Skillet ($15), and Chorizo Sausage ($13).

As far as Crispy Cauliflower goes, I’ve had similar before. I felt the deep fried batter may have been a tad heavy-handed, and I’m not sure why cauliflower dust (I’m assuming this is dehydrated veggie) is necessary. Perhaps it brings out the essence of the flavour better? What it has going for it is the maple and mustard glaze for that sweet and savoury balance. The chili flakes provided a little bit of heat as well.

I could have had several slices of the Mushroom and Artichoke Tartine. This was arguably the best dish of the evening. The wild mushroom fricassee was wonderfully creamy and rich, marrying well with the wine poached artichokes, and creamed spinach. The house baked grilled sourdough bread was perfectly dense enough to hold all of the toppings and keep its texture while being soft enough to eat without scraping the roof of my mouth.

Not enough meat for me on this Duck and Cornbread Skillet

On paper, the Duck and Cornbread Skillet sounded super appealing. Shredded confit duck leg? Check. Coffee jus? Check. Apple mostarda (candied fruit and mustard-flavoured syrup)? Check. Meuwly’s mustard? Check. Fresh cornbread? Check. I love duck and I love cornbread. It tasted fine. I just thought the amount of meat was lacking for an item listed under the meat section of the menu. I also found the cornbread to be kind of heavier in consistency than expected. It was like the middle held too much moisture and wasn’t able to rise enough. 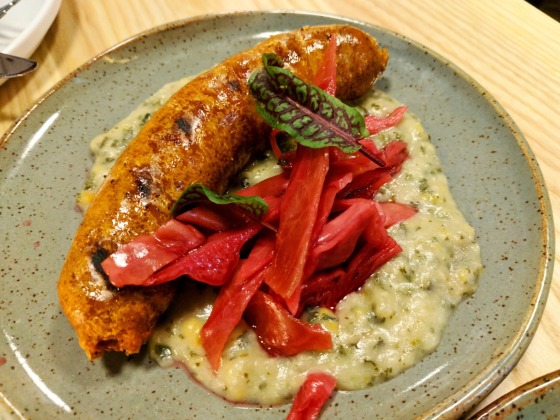 I really appreciate eateries that make everything from scratch. With that being said, Aarde did not disappoint when it came to their Chorizo Sausage. Lightly grilled with perfect seared lines, the sausage was laid whole across a bed of kale and potato mash. Served to the side was bright pickled red cabbage. Herb oil finished it off. When cut apart, the meat held together well. It wasn’t too tightly packed, making for even cooking and heat distribution. Not overly salty, well-seasoned, and a great mix of textures on the palate.

As we finished up our meal, the chef approached the table next to ours and seemed to dote on them. They ate a single dessert between them, and, for whatever reason, the restaurant was keen to know what they thought and provided them with complimentary beverages. I’m not one to ever ask for special treatment as I’ve always gone in anonymously to try restaurants to be as honest as possible. But, for a new business, I thought it was odd that they weren’t taking the time to ask for feedback from all of their patrons. Aside from that, service seemed to lack as soon as we finished our food. Our server didn’t really ask if we wanted dessert or anything else, and it took forever to flag her down again to get our bill when we were ready to leave.

Despite the end to our night at Aarde, I chalked it all up to growing pains. Therefore, in December, I suggested it as a spot for dinner. A good friend of mine was back in town for Christmas and I wanted her to sample something new.

This time, I made a reservation in advance. I actually used their online form, which is powered by Wix Restaurants. I received an email shortly after submitting saying my request was being processed and that I would get an email or text message to confirm. That never showed up, so I ended up phoning on December 26 to ask. Turns out they had it listed in their books, but obviously hadn’t followed up on processing it through the system. I’m going to assume that this was missed because I input my reservation request on Christmas Eve. Hopefully it’s more reliable the rest of the year.

For this particular visit, because of my previous experience, I requested a table away from the door thinking it’d be better and warmer. That was not the case. I’m not sure if they just don’t believe in indoor heating or what, but it was freezing in there again even though we were tucked away behind a wall in a nook. Oh well. I tried.

To eat, Kirk and I split four items between us: Vandaag Soep ($7), Roasted Butternut Squash ($9), as well as two of the larger plates, Duck Breast ($20) and Beef Ribs ($24). Kirk additionally ordered one of the rotational draught beers (20 oz. for $9) to quench his thirst.

Dishes were spaced out decently, so everything wasn’t delivered all at the same time. The first to arrive from the kitchen was the Vandaag Soep (a.k.a. daily artisan soup). On this day, it was a luscious potato leek dressed with twirls and drops of flavoured oils. Incredibly smooth with a slightly peppery finish, it was truly delicious and comforting on a chilly day. 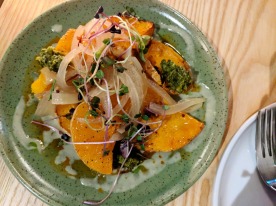 The Roasted Butternut Squash was surprisingly one of my favourites. Thick pieces of the gourd were prepared with pistachios, beet souffle, gremolata (an herb condiment typically made using lemon zest, garlic, and parsley), crispy leeks, lemon garlic leek oil, and pickled onions. It looked simple, but I think that it was probably more deceiving that I thought. There were a number of components and each required careful preparation. Extremely flavourful and satisfying without being overwhelming.

Between the two mains, I’d definitely say that the Duck Breast was better. While the Beef Ribs were fall-off-the-bone tender, I thought that the meat had more chunks of gloppy fat and grizzle than I’d prefer. I wasn’t a huge fan of the celery root puree either, which I thought watered down the overall taste of the food. I did like the charred cabbage more than I thought I would though.

On the other hand, the Duck Breast was fantastic. The seared duck breast was ever so slightly pink and really succulent. Sure, there was some fat between the meat and the skin, but it wasn’t to the point of taking away from the rest of the dish. A mushroom fricassee similar to that of the Mushroom and Artichoke Tartine and a handful of lentil fritters accompanied the meat. Very on point. We’d both recommend this duck to others.

Being the holidays, we also indulged in dessert. The sizeable London Fog Crème Brûlée ($10) was made with organic earl grey tea infused into the custard. On the side were a couple of biscotti cookies. I only had a small bite of the custard and sugar crackle. It was strongly flavoured, which I find to be of importance when it comes to sweets. It doesn’t have to be saccharine, but you should be able to taste what it strives to emulate.

Kirk and I divided the Dutch Almond Cake ($10). It was scrumptious! Somewhat dense and a tad chewy, it was still moist and delicate in flavour. The outer edges and top were crusty, and the sliced nuts added minor bitterness. The scoop of avocado gelato was oddly gelatinous while being crumbly. It actually did have a creamy mouthfeel though, and it was refreshing, but otherwise didn’t act like a typical relative of ice cream.

Aarde has some kinks to iron out in terms of the atmosphere, hospitality, and certain dishes. However, there’s a lot of promise, too. If the team works to hone their craft, this could be one of the next success stories in the Edmonton restaurant scene.