Croque Mon’Soubise’ was the star of the menu.

This past spring, the owners of Manor Bistro and Urban Diner, chef Cyrille Koppert and his business partner, Lisa Dungale, announced that they would be opening a third location called Partake. Situated next door to the diner at 12431 102 Avenue, it’d be the sister restaurant to the long standing brunch spot. Partake would also help to ease them into life without The Manor when it closes upon the expiry of their lease at the end of this year.

I kept my ear to the ground through the summer, and, come early fall, my friend and Partake’s bar manager, Clayton Kozak, informed me that opening day was happening. Sadly, I did not have a chance to make it there right away. In fact, I only managed my first visit towards the end of November, but, boy, was the wait worth it.

Check out those rounded built-in shelves!

From my understanding, the eatery does not accept reservations as the 30 seats are for walk-ins only. The place is made to look like a charming French bistro. A few small round tables reminiscent of what you might find outdoors at a Parisian cafe line the windows. The rest of the space is filled by three large booths and about a handful of bar stools. It’s casual and simply decorated, but you can tell it was created with love. I especially appreciate the rounded element of the doorways, mirror and built-in shelves. There’s also a version of their logo done in mosaic tiling embedded into the wooden floor. The pressed tin ceiling is gorgeous, too.

If only I could have admired all of the details in the daylight. However, now that winter had greeted us, even an early dinner at 5:00pm meant we were dining in dimness. I suppose it added to the ambiance though. It was cute and romantic in the candlelight. Plus, not knowing how busy it’d get on a Saturday evening, we opted to take one of the smaller tables for two, leaving the more spacious ones for others, and making it cozy and intimate as we dined.

Our server was helpful throughout the night. Since the items on the menu were created for sharing, we followed his suggestion and opted to split a number of dishes for supper. We selected five in total from the succinct list, which was more than enough (for two people, you actually can stick to three or four).

Empyreal Cocktail from above.

A complimentary snack to go with my drink.

To start, I also ordered the Empyreal cocktail ($13 for 2.25 oz.) made using the gorgeous blueish-purple Empress Gin, Maraschino liqueur, Giffard Crème de Violette, and citric acid. Presented in a small fluted glass with a twisted lemon peel, it certainly packed a punch. It was a boozy and smooth drink that was great for sipping, and it paired well with all of our food. As a snack, we were also offered a petite bowl of popcorn (daily from 4:00pm to 6:00pm, complimentary snacks are provided with purchase of a beverage) to whet our appetite.

Soon after, plates started arriving from the kitchen. I was very concerned about where everything was going to fit at first. As I mentioned previously, the surface area we were working with was tiny. But, being professionals, they carefully timed each dish, so that only one or two were brought out at once. Sure, that meant, I diligently polished off all of the plates before they would be taken away and I probably overate (in the future, I should ask that they bring me to go boxes), yet I commend their staff for allowing us to savour and enjoy our meal at a leisurely pace. 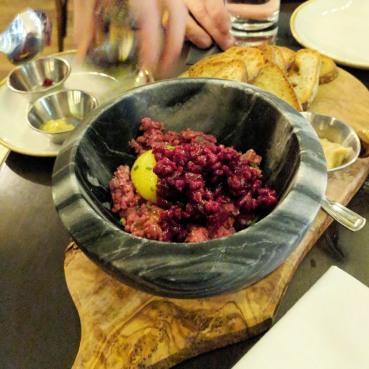 This beef tartare was not typical, but it was so good. 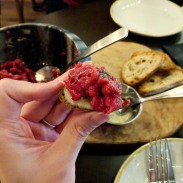 Dish number one was the Beef Tartare ($16). Bright red minced beef topped by an egg yolk and beet-barley relish was mixed table side with capers, mustard, and chives. A garlic puree was supplied as additional garnish for the perfectly toasted crostini. Although it was a different take on beef tartare, I thought it was wonderful. Full of flavour in every aspect, the tender beef was a real treat.

Following that was the Mushrooms ($9), a combination of at least three, maybe even four, wild Albertan mushrooms laid on thick toast. Drizzled with truffle oil and accompanied by large shavings of Grana Padano cheese, it was an uncomplicated, but decadent option. My recommendation? Make sure to get all of the components in each bite. Separately, the taste lacks a little. Together, it’s complete harmony.

Dipping the Croque Mon’Soubise’ in sauce.

Continuing with dinner, we then had the Croque Mon’Soubise’ ($18). This sandwich was layered with about an inch and a half of thinly sliced Meuwly’s ham, melted Gruyère cheese, and served with a creamy soubise sauce (butter and onion) for dipping. This was, far and away, the best of the night. Kirk and I agreed that Partake hit it out of the park with this item. That stringy, crisp cheese and soft toasted bread with incredibly well-seasoned ham and rich soubise sauce was so satisfying. Honestly, I’ve been thinking about it ever since that night.

Sausage with braised cabbage and mostarda.

The house-made Sausage ($9) was our fourth dish. A hearty meat, this was paired with braised cabbage flavoured with cinnamon spice and mostarda. Again, it was straightforward and tasty. It was also piping hot. When it came out we could see the steam rising from the plate.

To finish off our main meal, we had the Aligot ($12), also known as Potato Fondue. This had a down-home quality of mashed potatoes and garlic blended with a significant amount of Gruyère and Emmental. The cheese pull was beautiful and the side of bread created an excellent base of starch on starch (endless starch throughout the night, really).

Rounding out the evening was dessert. Despite being insanely full, it didn’t take a much for our server to twist my rubber arm. I caved and went for the Piss-a-la Dessert ($12). The origin of the Southern France-inspired dish (pissaladière), from what I could find online, is really more of a savoury-style pizza. But, here, the base was a deliciously flaky pastry crust covered in fig jam, melted cuts of brie, crunchy roasted nuts, and drizzles of caramel sauce. It had a salty-sweet balance that was at once warm, comforting, and divine.

Ultimately, Partake gave us one of the greatest and most memorable meals I’ve had in the city this year. Superb service was had throughout the night, the portions were large, and the prices were reasonable. More than anything, the chef has pared the menu down to about a dozen and a half items that truly showcase the simplicity and simultaneous complexity of French cuisine. That’s not exactly an easy thing to do. Nevertheless, Partake has succeeded. For Cyrille’s and Lisa’s latest endeavour, here’s to another 25 years in business.