Earlier on in my career, I could often be found with my colleagues sitting at a table inside the lounge of LUX Steakhouse. We all liked each other enough to spend extra time together after work over a drink or two. Back then, my favourite was Martoonie Tuesday (maybe it was Thursday). For two dollars plus change, I could have a full cocktail. They weren’t all that strong, but they also didn’t break the bank. It was a way to unwind on the cheap. As the years passed by, more and more friends left for other opportunities, or the circumstances of their home lives had changed, and those gatherings eventually subsided.

Every so often, I’d still frequent the restaurant for lunch or dinner. It wasn’t the same though. Flash forward to last month when I decided to revisit with one of my girlfriends. I’m always keeping tabs on Edmonton food deals (check out the page on my blog), and having seen their happy hour offerings, I felt inclined to go. The lounge, renamed BAR 94 in honour of one of the city’s favourite hockey players and current shareholder, Ryan Smyth, still looks relatively the same. Yet, the menu has gone through some updates.

Sparkling cocktails for just $3 every Tuesday from 4pm to 7pm.

The bar does serve the same dishes as are available in the restaurant; however, they also have their own distinct menu consisting of casual eats that include about a dozen share plates (varying in price from $7 to $17 each) and five handhelds. Every Monday to Thursday from 4:00pm to 7:00pm, all of those appetizers — minus the Team Platter — are available for just $10 per item, and premium well highballs, select draught sleeves, and house red or white wine are only $5 per glass. On Fridays, everything is another dollar less. Best of all, on Tuesday nights, there’s even the option ordering a sparkling cocktail or a six ounce glass of Prosecco for three dollars. Honestly, these prices are difficult to ignore.

I booked a table for us using the OpenTable app. In my request I asked to have them save us a spot in the lounge even though the system is really only meant for the restaurant. While it’s usually first come, first serve for BAR 94, they seem to be able to accommodate reservations whenever possible. In this case, it didn’t seem to be a problem. When I arrived, I found my friend already seated at the far end of the space.

Both of us started with some bubbly. She got a stem of Prosecco. I selected a sparkling cocktail of Prosecco and Chambord. Then we ordered a few plates to split: Mini Steak Sandwiches ($15), BAR 94 Dip ($14), Power Play Perogies ($14), and Truffle Lobster Mac & Cheese ($17).

The Mini Steak Sandwiches came as five slices of baguettes with marinated AAA Alberta beef piled on top. These were garnished with plenty of crispy onions, roasted garlic aioli, and shaved Pecorino. When I first set eyes on them, I have to say that I didn’t find them incredibly appealing. They lacked pizazz, but one bite was all it took to change my mind. The meat was actually very succulent. The bread wasn’t overly toasted, so the edges didn’t scratch up my mouth. I found that the frizzled onions added some texture and paired well with the garlic aioli.

It’s hard to go wrong with dip and chips. The BAR 94 Dip was no exception. Theirs consisted of shaved brussels, roasted red pepper, cream cheese, and Parmesan in a skillet. The consistency was nice with a rich flavour, and it was easy to scoop up with the accompanying crispy tortillas. Although, I wouldn’t exactly call the chips crispy per say. They looked more like wonton chips as they had a puffy quality to them. Despite that, they lacked any crunch. I’m not complaining, however. I quite liked them that way. If I have them again, I’m not sure they’ll turn out the same. This could have been a one off situation for all I know.

I was pleasantly surprised by the Power Play Perogies. I had pictured something more like what I could pick up at the grocery store with those thick shells and the pasty potato filling. These were a thousand times better. Think of pillowy pan-fried gnocchi pasta, except huge and filled with potato cheddar. They were then covered with sour cream, caramelized onions, and added bacon ($3). Super savoury and a great value for the money.

One of my go-to plates at LUX has always been the Truffle Lobster Mac & Cheese. It’s one of their signature items and for good reason. They’ve elevated a comfort dish to a new level by combining the everyman’s pasta with Atlantic lobster, shaved truffle and plenty of Parmesan. Admittedly, I ordered this more for myself. My friend is allergic to lobster, so I knew I was going to be the only one eating it, and I intended to take the leftovers home for my boyfriend to enjoy. This appetizer is worth every penny in my books. 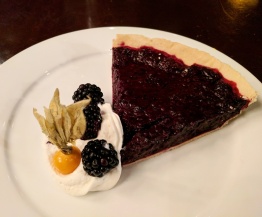 For dessert, my friend chose the Home Made Pie (blackberry). The price changes based on the market price of the filling used. It was good. Not overly sweet. Yet, I would liken it to a tart since it was much thinner than a typical pie. I went with the Carrot Cake. The huge slice of spiced cake sat in a pool of delicious Maker’s Mark bourbon caramel and was topped with cream cheese icing and candied pecans. This was delectable, but I was only able to have a small portion before going into a sugar coma. I’d recommend finding someone to split this one with. 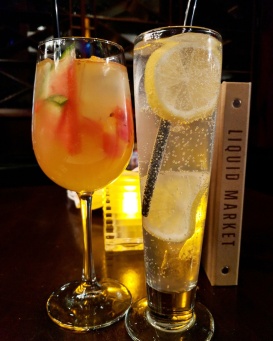 Hartley’s Lemonade on the right. I cannot remember what kind of sangria is on the left. 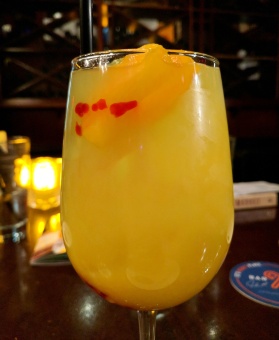 Not to be outdone by this meal, I ended up at BAR 94 for the second time in a month. This time I was there with a couple of my more currently beloved co-workers. It happened to be a Thursday (handcrafted two ounce cocktails for $8), so I chose what I believe was called a Hartley’s Lemonade. I didn’t love it. It came across as a bit acrid after each sip. Nevertheless, my second cocktail, the Tropical Sangria, completely made up for it.

That night, we opted for the ‘Bucket of Bones’ ($15) and two servings of the Steakhouse Nachos ($16). If we’re talking about bang for the buck, I’d argue that the ‘Bucket of Bones’ (a.k.a. crispy rib tips) is a best bet. They were well-breaded and tastily seasoned with maple, cider vinegar, and fresh thyme. Regardless, it was those Steakhouse nachos that we relished. The fresh cut russet potato chips were individually layered with shredded beef short rib, shaved aged cheddar, jalapenos, and house made salsa. Each piece had exactly the right amount of toppings, and the ranch dip was a perfect way to cool down any heat from the pepper. There just weren’t enough of them in a single order. Hence, the need to have a second helping. At regular price, it wouldn’t the most practical way to spend one’s hard-earned money. On the other hand, when shared during happy hour, it’s somewhat justifiable.

Needless to say, I’m on the BAR 94 bandwagon once again. With food that rarely disappoints and specials that are easy on the wallet, it’s going to remain one of my top picks for downtown happy hour.