The interior of The Black Pearl.

A group of us played an evening of escape rooms at SideQuests Adventures Inc. on a Tuesday night. When we were finished, we parted ways, but a couple of us had planned to stay out and grab a bite afterwards. We didn’t have anything specific in mind. Yet, being on the 4th Street Promenade of downtown Edmonton, it made sense to explore the block to find a place to hang out.

We passed by a few popular spots before we decided to give The Black Pearl a try. Stepping through it’s doors was like walking through the wardrobe in The Chronicles of Narnia. There’s a ton of woodwork throughout the space. At the back are a few fish tanks. Netting and ropes drape down from the ceilings and stairwell as a decorative measure. If it isn’t already apparent, this is an eatery that specializes in seafood.

Arriving a little over an hour before the establishment would be closing for the night, it was surprisingly still quite full. There were even a few people cozied up to the bar indulging in platters of oysters and crab legs. However, we managed to snag a table for two without issue.

Each of us ordered a cocktail to start. My friend went with the Light and Crisp ($7) and I grabbed a Rosemary Gin Fizz ($10). I can’t attest to how her beverage was, but I loved my choice. It was smooth, refreshing and ever so slightly tart. I thought it was a fantastic night cap as it quenched my thirst and hit the spot without coming across as too strong. 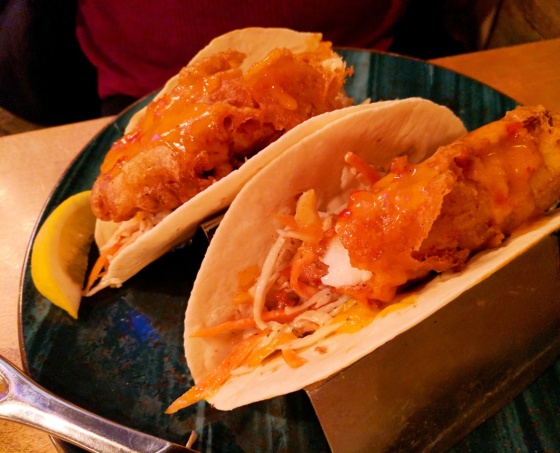 For our food, my friend opted for the Fish Tacos ($17) while I selected the Beef Tataki ($16). First off, I’ll just say that, looking over the menu, I found the prices to be higher than I would have liked. I do realize that the restaurant is trying to bring in the freshest ingredients by importing most of their seafood from the west and east coasts of the country, but I don’t think that a Seafood Mac & Cheese — made with lobster and baby shrimp — should cost $27 per plate. At least, not when I can go to Bar 94 at LUX Steakhouse and have Truffle Lobster Mac & Cheese for $17 instead (only $9 to $10 during Happy Hour on weekdays, too).

Cost aside, the Fish Tacos were sizable. Considering that the dish only comes with two tacos, the pieces of fried haddock wrapped in the tortillas were relatively hefty. Served with in-house made coleslaw and chipotle mayo drizzled on top, these turned out to be very filling. The fish was also prepared well with the meat flaky and moist.

Beef Tataki with a glass of the Rosemary Gin Fizz

I wasn’t entirely sure that a restaurant with a focus on seafood was the place to be ordering Beef Tataki, but one forkful of the sliced beef and baby shrimp put my mind to rest. Honestly, I usually hate baby shrimp. They’re often overcooked and rubbery. In this case, they were actually succulent. Most likely the juices from the tataki marinade helped to keep them from becoming too dry, allowing me to enjoy them for once in my life. The star of the plate was, as it should be, the beef with edges nicely seared. The meat was thicker than I expected. But, it was incredibly tender and perfectly marbled.

Service also plays a big factor, and, here, at The Black Pearl, it was impeccable. Our server was warm, willing to answer questions, checked in on us at appropriate times, and reminded us about last call in case we wanted anything else before we left.

The intimate atmosphere, the delicious cuisine, and the top notch hospitality certainly makes me want to revisit The Black Pearl. When I do, I’ll be keeping in mind their daily specials like the half price fish tacos on Wednesdays and the $10 tapas on Thursdays because as much as I enjoy going out for a meal, I always appreciate it more when it’s also friendly on the wallet.

One thought on “Edmonton Restaurant Review: The Black Pearl”