Portable pizza ovens that fast-fire pies in under 2 minutes!

The first time I tried Urbano Pizza Co. wasn’t at one of their storefronts. It was actually at last year’s Sturgeon County Bounty Culinary Cookout. As one of the participating partners at the event, Urbano was well prepared to serve the masses. They brought with them a couple of their portable pizza ovens (fast-fired in under two minutes) and were cooking up their meat (The Italian Stallion) and vegetarian pies as fast as they they could manage.

Urbano ended up being our favourite vendor of the night. Not only did they provide reasonable portions for the tickets redeemed, but their pizzas had a lovely thin crust and a mountain of toppings. In fact, my only complaint was that the toppings were so heavy that the crust couldn’t withstand the weight, making it tough to keep my slice together.

Fast forward a year later and I was contemplating where my co-workers and I could go for a quick lunch together. The light bulb in my head went off and I suggested Urbano Pizza Co.

The day we went, we arrived at the original downtown shop (at 102 Avenue and 103 Street) a little after 1 o’clock. It was quiet. There were a few staff members lingering behind the counter and one other customer perched on a stool in the seating area.

The menu displayed on a few screens.

We all took a few minutes to review the menu, which consisted of several Signature Pizzas and Pastas as well as the choice to build your own dish ($11.95 each; $7.95 without toppings). Although it was tempting to consider the latter option because I could pick whatever I wanted (similar to LOVEPIZZA and Blaze Pizza), I wasn’t in the mood to put a lot of thought into things. I ended up taking the lead by ordering The Vegetarian pizza.

I watched the staff as they put my pizza together from start to finish. When not in use, they always pull down the cover of the case to keep the toppings fresh. As they went along, I had the opportunity to let them know if I wanted anything excluded or switched out or added on. There are no extra charges for changes made, so it’s completely customizable.

A view of the prep counter from the seating area upstairs.

By the time I’d paid at the till, my pizza was already out of the oven and had been transferred to a wooden pizza board. I guess the staff members typically bring the food to the customer’s table, so the guy who had my pizza was a tad reluctant to hand it over to me at first. Yet, after checking with another person, he passed it over to me and I made my way up the stairs to grab a table.

The rest of my party followed and their pizzas showed up a few minutes later. I didn’t sample everyone else’s lunch. However, I was told throughout our meal that they all enjoyed what they had selected: The Piri Piri, To the Greek, and Pork & Pineapple. 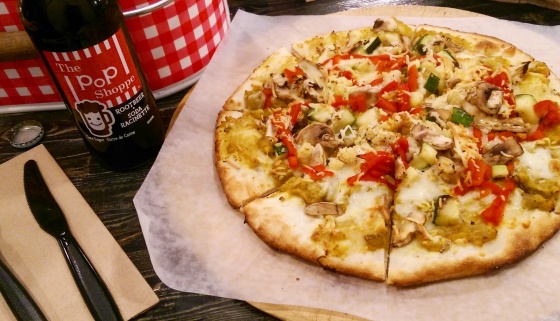 The Vegetarian pizza with a bottle of Root Beer.

I loved my Vegetarian pizza. It’s a bit different from others as the base doesn’t consist of the usual tomato sauce. Instead, it’s replaced with a puree of eggplant curry. Then it’s topped with roasted cauliflower, grilled zucchini, mushrooms and roasted red peppers. Flavourful and filling despite the lack of protein, I’d be inclined to get this one again.

In fact, the pizzas are quite large for the price. None of us were able to finish the whole thing. One of the employees passed by and came back carrying takeaway boxes without us even having to ask. The leftovers served as my lunch the next day. 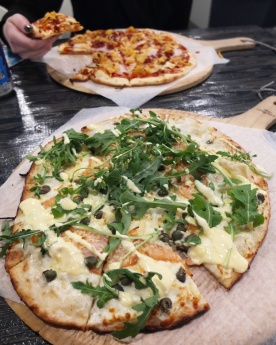 My bottle of Lime soda to go with dinner.

Just this month, I went back to Urbano for dinner with a friend. We each ordered a pizza. I still didn’t opt to build my own, but I made sure to try something new. This time, I chose the Salmon. I opted to omit the red onions though. What remained of the toppings was Hollandaise sauce, white sauce, smoked salmon, capers and arugula. I will say that the salmon loses a bit of it’s appeal from an appearance standpoint since the fish turns more of a brown colour after being cooked in the oven. Nevertheless, it’s quite delicious. The smoked salmon still had a tenderness to it along with the salty flavour, and the creamy sauces worked well to balance out the slight bitterness from the greens. The one issue I did have, and maybe it’s due to the amount of sauce and the moisture from the salmon, is that over time, the crust can get a bit soggy as it sits. Still, I ate the whole thing.

My friend’s Pork & Pineapple pizza on the right.

I also had a bite of my friend’s Pork & Pineapple pizza. It’s not one that I’d usually go for, but it was decent. Made with tomato sauce, roasted pork loin, pineapple and Camembert cheese, it was certainly more traditional in flavour. Personally, I do think it was missing a little something; it needed an unexpected punch of flavour to add an element of surprise. Regardless, those who like Ham & Pineapple likely won’t be disappointed.

Urbano Pizza Co. is the sister to the upscale Sabor Restaurant. Owners Christian Mena and Chef Lino Oliveira took a sharp left turn when they decided to go the fast-casual route. Yet, it’s a concept that works. With others like it popping up all over the city, it’s obvious that they were on the right track. Perhaps it’s because I’m often going there before or after the lunch and dinner rushes, but I’ve experienced nothing but friendly faces, quick service and tasty food each time I’ve visited Urbano. Plus, it’s fairly affordable for a relatively healthy meal with fresh ingredients, many of which are made in-house.

They’ve also got a great deal on their Pizza of the Day. Ask for details when visiting!