Worked my way through my White Top pizza.

On a whim, my boyfriend and I decided to pop over to the Brewery District last month. We were both hungry, so we opted to try Blaze Pizza for lunch. Similar to Edmonton’s own Urbano Pizza Co. or LOVEPIZZA, this Californian chain of franchises started infiltrating the city with their version of the build your own pizza process back in the spring of 2016 on the north side. Just a little over a year later, two more have risen. This location in the west end and another at South Common.

I’m going to assume that the three shops are relatively the same in terms of quality. From what I gathered on the Blaze Pizza website, franchisees are expected to sign on to develop a market area, so it’s very likely that all of the current spots in the city actually share the same ownership. Plus, with standardization across a chain, it should be expected that dining at one is equivalent to eating at another. In that case, I have to say that, going forward, my expectations will be relatively high.

Placing the toppings on my pizza.

Watching the staff while waiting to pay.

When we arrived at Blaze Pizza, it wasn’t too busy (the line picked up five minutes later), so the first staff member we encountered was able to explain the whole process to us. Instead of creating our pies from scratch, we both chose to go with their signature pizzas ($11.65 each) — BBQ Chicken for him and White Top for me — supplementing our very own unlimited customizations as we saw fit.

I enjoyed watching them prep the balls of dough with a pressing machine that flattened them into a thin base. The dough was then transferred onto a wooden board that made its way down the assembly line. It begins with the sauces, then moves to the cheeses, followed by the meats, and then the final toppings. At that point, the board is handed over to the “pizzasmith” who slides the pie into the oven. The three minutes it takes to cook is when payment is processed. After that, either find a table and come back to grab the pizza, or wait by the prep area next to the oven for it to be done. 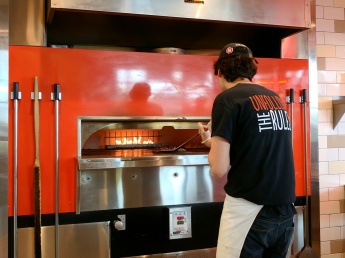 Working the oven. I think they need two people for this job when it’s busy.

There seemed to be somewhat of a bottleneck during the baking of our pizzas because it took longer than 180 seconds for them to come out. When they’re fetched from the oven, they are placed onto a pan, sliced and then finished off with any last sauces or toppings. I had to ask for the pesto drizzle and I also had to remind the employee to put my arugula on before he handed it to me (I was informed earlier that those greens were placed on at the end to avoid wilting from the heat). My boyfriend’s pizza took another few minutes.

Initial impressions for me: 1) thin, foldable crust; 2) a tad too crispy on the bottom and edges, but still had a nice chew in the middle; 3) flavourful; and 4) plenty of different toppings. I never did sample the BBQ Chicken pizza, but the White Top was made with white cream sauce, mozzarella cheese, applewood bacon, chopped garlic, oregano, and arugula. Personally, on its own, I don’t think the toppings would have sufficed. The staff were kind of skimpy with those ingredients. Thankfully, I had garlic pesto sauce, grilled chicken, artichokes, zucchini, and goat cheese added to the mix, which helped to fill it out.

For the most part, our experience at Blaze Pizza turned out to be a good one. I’m not yet sure if it’s the best pie joint in the build your own pizza realm, but it’s certainly decent enough for the price.