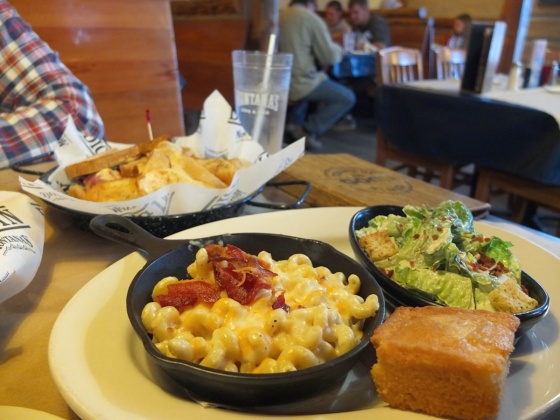 I’ve never put much thought towards the Montana’s BBQ & Bar restaurant chain. There are four locations that dot the south side of the city and two relatively close to my home. Yet, for some reason, they never really appealed to me.

I’m going to chalk that up to the fact that I didn’t grow up going camping or lodging, so the very rustic cabin atmosphere didn’t seem to lend itself to the idea of a great meal out. However, my boyfriend had mentioned time and again to me that Montana’s makes some pretty good wings. Plus, I just happened to get a coupon in the mail.

We ended up going to the South Edmonton Common branch for lunch on the August holiday Monday. We arrived just as they opened and one of the servers greeted us before she walked us to a booth nearby a few other customers. 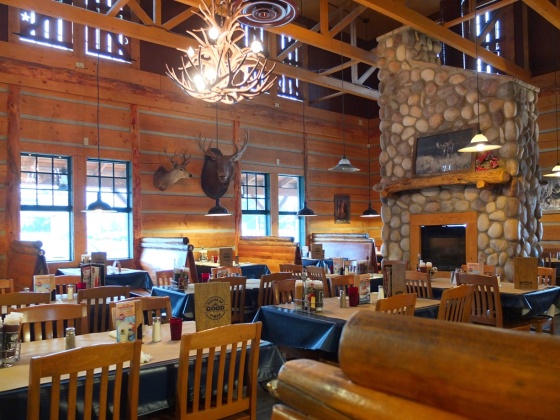 The interior of the South Edmonton Common Montana’s location.

My first impression was that the joint was just as I imagined it would be. High ceilings with wooden beams (essentially wood everywhere), a stone fireplace, mounted animal heads, classic truck facades and a full-size canoe were among the decor choices I noticed. 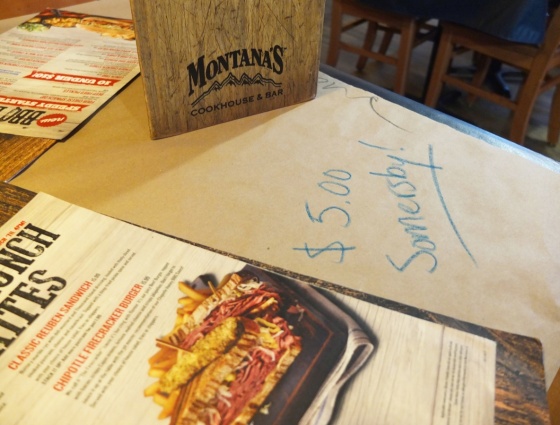 Crayons and kraft paper provide entertainment at the table.

All of those things truly set a tone. Although, I don’t know that they scream barbecue. Either way, I didn’t actually mind it. The casual setting is great for a family outing, especially if one has children. We don’t have kids, but the kraft paper placemat that covered the entire table and the cup of crayons provided are arguably entertaining for adults as well.

Going in, the only thing I knew we were ordering was a basket of the Double Dusted Chicken Wings ($13.79, but half price on Mondays). Otherwise, we had some decisions to make. Between the two of us, we finally settled on the lunchtime Reuben Sandwich ($15.99) and Mac ‘N Cheese ($11.99).

The wings didn’t take long to make their way out from the kitchen. The reason why my boyfriend enjoys them so much is because there’s a lot of meat. I have to say that he was right. The wings themselves were larger than what might be found elsewhere. The only thing is that these orders only have eight wings each. Other restaurants often serve wings by weight and instead of eight wings, there might be ten to twelve instead. It balances out. Also, even with half price wings when we went, they still work out to be almost $7. Compare that to Tuesday night at Original Joe’s where a whole plate of wings comes to $4.50, and I’d probably be more inclined to go to the latter. In any case, I tend to prefer wings that are cooked with dry rubs, so these were quite messy. But, the texture was okay (still slightly crispy despite all the sauce) and the medium flavour was savoury, a little zesty and had a small kick of heat at the end. Reach dip also helped to tone down any spiciness, if needed. On a side note, I will commend Montana’s on their excellent sourcing of wet wipes, which are supplied to diners. They’re some of the best I’ve ever used.

Moving along to our mains, my boyfriend is the one who chose the Reuben Sandwich. Smoked pastrami isn’t my favorite kind of meat. Yet, I’ll admit that it was quite good. I think it comes down to it being made in-house versus anything I’d get at the grocery deli. The meat was plentiful and succulent. Combined with mustard, thousand island dressing, sauerkraut and cheese, it proved more complex than I expected. Our main suggestion for improvement would be to grill the buttery marble rye a little longer to give the bread more texture and flavour. For his side, my boyfriend chose the chippers, which are fresh made potato chips sprinkled with dried dill seasoning and served with a dill dip. These were surprisingly good on their own. The potato slices were big, crunchy and non-greasy with a hint of the herb. Personally, I found the dip to be too strong, so I refrained from eating much of it.

Both of our entrees actually showed up about half way through our devouring of the wings. The server even apologized that everything came out at the same time. It didn’t matter so much for the sandwich, but it would have been nice to get the Mac ‘N Cheese a while later. I wanted to finish the wings before they got cold, but it meant that I was delayed getting to my pasta.

Thankfully, the macaroni and cheese came plated in a hot iron skillet. By the time I got to working on the dish, it could still be considered warm. I liked that Montana’s utilized cavatappi (corkscrew) pasta. The shape picked up more of the cheesy bacon and white wine cream sauce, locking in all the flavor. The whole thing was then baked with additional cheese until melted and golden brown. I do wish that there had been more crispy bacon tossed on top, but overall, this was a passable mac and cheese. If anything, this lunch-size version is a great value; included with the pasta is a side of Caesar salad (an appropriate amount of dressing for me) and in-house baked cornbread (sweet, moist, not too crumbly). The cost won’t break the bank and all three components of the meal are definitely filling enough.

Now, we could certainly have skipped dessert that day, but the coupon I had on hand required a $40 purchase in order to receive a $10 discount, so we went for it. Montana’s provides several options in the sweets department. We ultimately decided on the classic Skillet Cookie ($6.99). First, I’ll say that it wasn’t quite what we were expecting. Our idea of a skillet dessert is that it’s made right in the pan itself. When the dish was delivered to our table, it looked like two already baked chocolate chip cookies had been sandwiched together with caramel in between and then placed into the skillet to be warmed. The dessert was then topped with a scoop of vanilla ice cream. I did find it to be very sweet and I tapped out before it was finished. However, it wasn’t bad by any means. The cookies were soft and chewy with lots of melted chocolate. The semi-sweet chocolate chips probably even aided in balancing things out with a touch of bitterness.

So, is Montana’s BBQ & Bar going to be a place I visit regularly? Most likely not. Nevertheless, going forward, I won’t discount it either. Timing issues aside, the service we experienced was excellent at this particular spot, and the food, while not the best I’ve had, is of decent quality for the price.