Our spread of food for our main dishes.

A visit to The Melting Pot (2920 Calgary Trail) has been a long time coming. Like the French version of Asian hot pot, I was bound to like it. So, for my anniversary with Kirk, I made a date night reservation (through OpenTable; they also accept dining cheques) to mark our three years and counting together.

Our own private nook for two.

Our table was booked for 6:30pm. Yet, when we arrived, we still had to wait for at least 15 minutes after checking in before we were taken into the restaurant. I found that to be somewhat frustrating. While we stood by, I looked around at the lounge area. It has an open concept like most other restaurants. But, the middle of the tables held built-in hot plates to heat the food. Much to my surprise, when we were finally seated, we were taken past the wall of wine to the more private dining area. We went through what felt like a maze of little nooks until we were directed into a very intimate booth for two. Once we settled in, it felt very cozy. No one else was in sight and it was quiet.

We went through the drink menu. They didn’t seem to have a whole lot of beer options, so Kirk went for a couple pints of Big Rock Grasshopper ale ($8 each). I always tend to go the cocktail route, so I tried the Sassy Senorita ($11.50). It was light and refreshing with a berry finish.

The knowledgeable server gave us the details on how their menu works. You can order a la carte, or purchase an entrée that comes with a cheese fondue, salad, and dessert alongside the price of the main for a full four-course experience. We opted for the latter.

Although the Spinach Artichoke cheese fondue is their most popular, I was hoping for something where the cheese would be more prominent. We ended up going for the Quattro Formaggio. We watched as our server created the fondue right before our eyes (I never knew that wine was used as the base). He mixed and melted the ingredients all together until it was silky smooth. Flavoured with traditional pesto and sun dried tomato pesto, it was decadent. The cheese paired well with the apple, veggies, and bread provided, and, upon dipping, the cheese held on well to everything. We didn’t have to be concerned about any dripping off onto the table or our plates.

Our fondue being started. 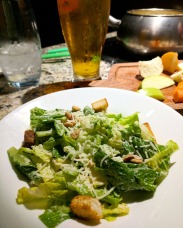 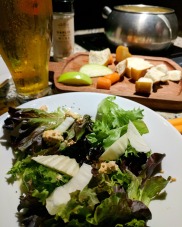 The salads that came after — Caesar for Kirk and Chevre Citrus for me — were rather petite. Considering the size, I felt like there was way too much of the dressing on mine. I did like the goat cheese and the dried berries though. Kirk’s Caesar salad was actually quite good with it’s use of pine nuts for texture. 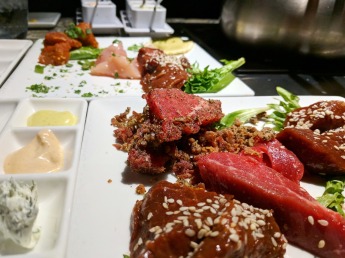 Onto the main courses. Kirk selected the Alberta ($49.25), which consisted of Mushroom Ravioli, Memphis-Style Dry Rub Pork, Teriyaki-Marinated Sirloin, and Herb-Crusted Chicken. I chose the Steak Lovers ($59.25) entrée as it was all meat: Premium Filet Mignon, Teriyaki-Marinated Sirloin, and Garlic Pepper Sirloin. Taking into account that mine was a whole ten dollars more than Kirk’s, I think that I got my value out of it as the portion of beef was relatively generous. On the side was an extra helping of veggies (mushrooms, broccoli, and potatoes) for us to share.

The Court Bouillon broth being brought to the table.

With our emptied bowl of cheese now replaced with a pot of their standard Court Bouillon (seasoned vegetable broth), we got down to cooking. We were told to let the meats cook for around two minutes per piece; however, I know I let mine sit in the broth for longer at times. No food poisoning happening on my watch! Still, everything came out decently with the beef staying pretty tender. I also wasn’t sure how the rubs and marinades would fare in the broth, but the flavours remained prominent. For added variety, there were six different sauces provided. My fave were the sesame and curry. The goddess (with a cream cheese base) was great for stuffing the mushroom caps, too.

After polishing off our mains, all that was left was dessert. A pot of chocolate was dropped off at our table with a dish of fruit and sweets. We just started going for it without thinking. Turns out that our Flaming Turtle chocolate fondue wasn’t even complete. Our server returned to do the flambé and add in the caramel and nuts (supposed to be candied pecans, but they were out, so we took walnuts instead). I wasn’t a huge fan of the marshmallows or rice krispies. Nevertheless, the pound cake and fruit — bananas, strawberries, and pineapple — were delicious with the oozy chocolate. We also asked for seconds (free refills on the accompaniments are included) of the blondies.

For our anniversary, we received complimentary sparkling wine to go with dessert.

Since it was our anniversary, the staff helped us to commemorate the occasion by offering us complimentary glasses of sparkling wine, which we had with our dessert. It certainly made for a memorable evening out to be wined and dined in this fashion. For a few hours we really got to focus on each other without any other distractions. While this isn’t necessarily a place to drop in for a quick, casual bite, The Melting Pot should definitely be in the running when there’s cause for celebration.

The Melting Pot offers a Crave Combo Menu for $29.95 before 5pm and after 9pm.

One thought on “Edmonton Restaurant Review: The Melting Pot”