I’d eaten sushi and ramen at Nomiya in the past, but I’ll admit that it’d been a long time since my last visit. The Ellerslie location just celebrated their fifth anniversary though, and that prompted me to go back.

I certainly don’t like how tiny this place is as it feels very cramped (their other shop on Calgary Trail is a lot more spacious), and I also thought that much of the serving staff was rather slow with everything (except for one who was working her butt off and should have been running the show).

At the very least, once our order was placed, all of the food was quickly prepared. It was especially fast sitting at the bar since the chefs could just hand the dishes right to us and we didn’t have to wait for someone to bring everything over.

Nomiya has a pretty extensive list of options that range from appetizers to noodles to sushi. Yet, Kirk and I stuck mostly with classic sushi menu items as those are the best to gauge the quality in comparison to similar restaurants.

I started with Salmon Sashimi (5 pieces for about $12…honestly, I can’t really recall the exact price). These looked and tasted fresh. They were thickly cut with a slightly fatty texture, and there was little to no tendon to be found either. The sashimi totally hit the spot for me and helped to quell my sushi craving a bit. 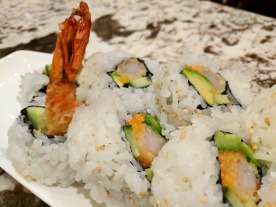 Next up was the California Roll ($9.45). Kirk always gets these. They seemed to be decent. Yet, I noticed that they stuck with imitation crab meat rather than real crab. The avocado was also small towards the ends of the rolls, so the kitchen isn’t super consistent when making maki. Kirk’s other pick was the Dynamite Roll ($12.95). These were actually delicious. What took them up a notch was the use of made-to-order shrimp tempura, meaning these were warm. The shrimp itself was still juicy, too. 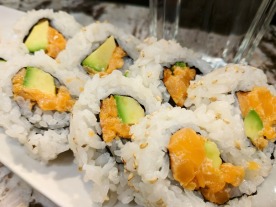 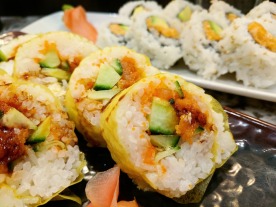 Chop Chop Rolls ($11.95) are one of my go to dishes. With a good ratio of rice to filling, these ones didn’t disappoint. The avocado was prominent and I liked that the scallops were mixed with tobiko in Japanese mayo to give added texture. To change things up, for my second choice, I went with the more modern Spicy Phili Roll ($12.95). This one came wrapped in coloured rice paper and filled with cream cheese, avocado, cucumber, spicy sauce, and salmon. While I appreciated the contrast of flavours on the palate, I wasn’t too happy with the abundance of rice as there was away more of that than any other ingredient.

Nomiya managed to provide a passable sushi meal with hints of greatness on a very busy night. Nevertheless, for about $80 including tax and tip, I think that there are probably better choices out there. Granted, I’m not one to pass up happy hour deals, and they do seem to have an okay selection for that, so I’ll return to try items from that menu sooner than later.