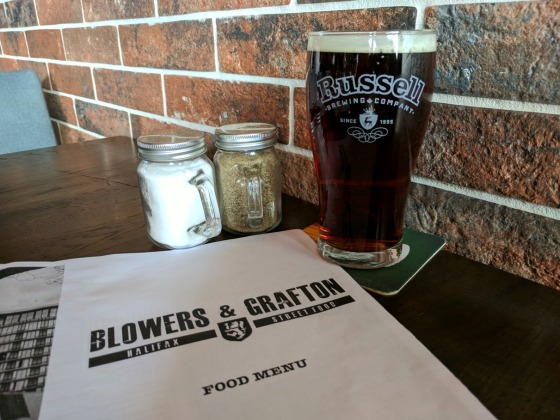 Relaxing with a pint at Blowers & Grafton.

Driving down Whyte Avenue earlier this summer, I noticed the facade of a new establishment called Blowers & Grafton (10550 82 Avenue). Touting itself as a place for Halifax Street Food, I was immediately excited since Kirk is from New Brunswick and I had a hunch that he’d like it. Nonetheless, at the time, it was put on the back burner. Then, fast forward about a month when we decided to meet up with some friends for a bite to eat over the first weekend of the 37th Annual Edmonton International Fringe Theatre Festival. This ended up being our pick of the day. 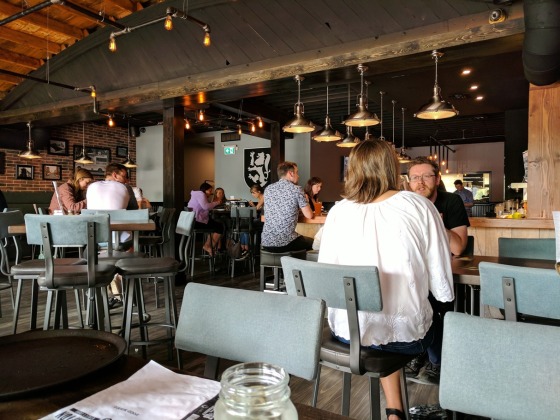 Blowers & Grafton has a casual space with a distinctly East Coast feel.

We arrived just before 3 o’clock in the afternoon on a Saturday. The place was about three-quarters full and we managed to get seated right away. It’s actually quite a nice space with tables spread out well, so customers aren’t draped over each other. There’s a distinctly vintage rustic industrial design with open ceilings, original beams, brick, lots of stained woods, Edison bulbs screwed into pipes, warehouse-style pendant lighting, and upholstered metal stools. The only shots of colour in the place come from the reddish faux brick walls and a faded denim shade as seen on the seats and towards the back of the pub. To decorate, they’ve hung historic photographs of Halifax throughout. As our friends mentioned, the Edmonton location is much better than the initial hole in the wall built in Calgary. Overall, it’s comfortable and it immediately feels like a decent hang out spot.

So, for those who aren’t aware, Blowers & Grafton is a famous intersection in Halifax otherwise known as Pizza Corner. It laid claim to the name due to the number of shops that populated each quarter of the crossing streets. I’ve only been there once before and, if I recall, it’s no longer overrun with pizza. Although, other snacks like poutine may give the pies a run for their money. Both of those items are definitely on offer here, along with donairs, fish n’ chips, clams, scallops, and mussels. 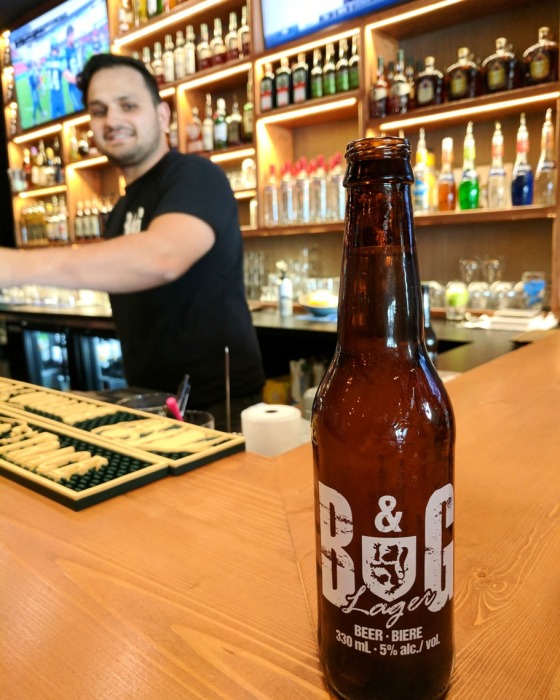 The elusive B&G bottles. They’re hoping to stock these here as well. These were just a treat from the owner.

They have made a concerted effort to stock East Coast beers for half of their taps; however four of the six are standards like Alexander Keith’s and Moosehead. The rest of the options are Canadian brews with two coming from Alberta. This includes a B&G Wheat ($6.50) created specifically for Blowers & Grafton, likely by Minhas Micro Brewery out of Calgary as that company also created their standard bottled lager, which is currently only served at the Calgary location. NOTE: Happy Hour drink specials happen Monday to Friday from 3pm to 6pm and Sunday to Thursday from 9pm to close. Check my YEG Food Deals page for details.

They also have an adequate cocktail list from which I selected The Bluenoser (our lovely server suggested it). In a mason glass was mixed a vodka base with St-Germain liqueur to give it a hint of elderflower. Additionally, flavours of lemon, lavender, blueberry and mint made up the remainder of the recipe. Honestly, considering the short cup, it didn’t seem to consist of two ounces of alcohol; this beverage was incredibly drinkable. I absolutely recommend stirring it up before sipping on it though. It’ll ensure that all of the ingredients meld together to create a full profile. Otherwise, it can be rather bland at first.

Foodwise, Kirk had his heart set on the Garlic Fingers ($13.50) with Bacon Bits ($2). I chose the Mini Lobster Rolls ($22). Our friends went for the Garlic Fingers (a group with three Maritimers cannot share a single order peacefully), too, and they added a basket of Brothers Fried Pepperoni on the side ($13). 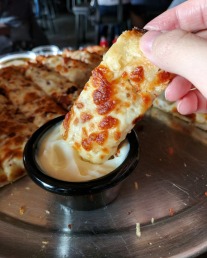 I’ll admit, whenever Kirk raves about the almighty garlic finger from back home, I wonder what the big deal is. Hasn’t he ever heard of the cheesy bread found on the majority of menus at pizza shops galore? But, I digress. Yes, the Garlic Fingers are delicious (especially when fresh out of the oven). They take their homemade pizza dough and smother it in garlic butter and mozzarella cheese. You really can’t go wrong with a dish like that. What I think differentiates East Coast garlic fingers from anything similar is probably the sweet donair sauce provided for dipping. Blowers & Grafton does a good job and I’ve been told that they’re Kirk approved.

In my mind, the Mini Lobster Rolls could use a bit of improvement. These were comprised of decently sized pieces of real Atlantic Lobster tossed with mayo, lemon and fresh dill. I thought the mayo was a little light handed and I wasn’t a huge fan of the bed of tasteless slaw that the lobster sat on. It also didn’t need lobster butter on top. What was done right was the searing of the mini buns in butter. As for the sides, there were only two choices that didn’t require an extra cost: fries or chips. I opted for the latter. They were crispy and delicious and served with a basic ketchup. All in all, these were alright. Yet, for the quality and amount of food I received I can’t really justify the high price. If they had wowed me, maybe. Unfortunately, that wasn’t the case.

Surprisingly, I think the Brothers Fried Pepperoni was the best thing I sampled from the Blowers & Grafton menu. The portion size was generous, the sausage was sliced thick, it wasn’t as greasy as I expected, and it came with a delicious honey mustard that was made in-house. While we went with the mild pepperoni, it’s available hot as well. Keep in mind though, the mild was still relatively spicy (nothing crazy, but there was a noticeable kick of heat).

Finally, it was time for a sweet finish. The only dessert they make is their Blueberry Grunt Donut ($1.50 each). A tad larger than a Timbit, it is relatively easy to fit in at least one at the end of a meal. The deep fried pastry dough was drizzled in blueberry grunt compote and maple syrup dulce de leche. It’s kind of rich because of the syrup, but with such a small dose, it’s manageable and worth it.

Before we left, we had a chat with a couple of the owners. They’re both extremely friendly and they were happy to discuss the expansion from Calgary to Edmonton. In fact, it’s going so well that they hope to make it even bigger down south. It never occurred to me before, but I suppose East Coast eats are a thing and there is a large enough customer base looking for this type of menu — a memory of home — in the Prairies. Being one of the first to bring Maritime street food here, Blowers & Grafton may just corner the market in the west.