This is a quick shout out to 4Cats Arts Studio in Edmonton’s Summerside area. Run by Michelle, this is one of the few locations that is still independent of head office. Although it probably caters mostly to camps for children and kids events, workshops can be booked for adults, too. They offer painting (acrylic or splatter), pouring, and clay parties (and sometimes clay wheel classes) for the older lot. 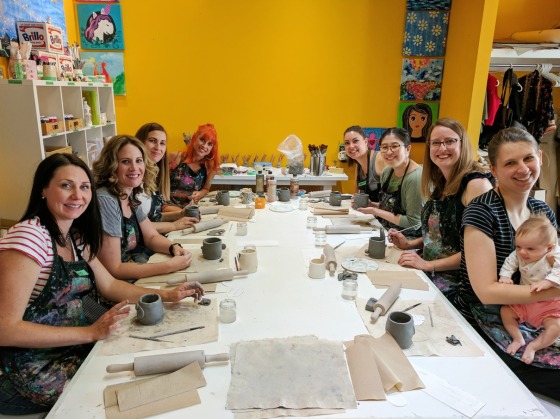 Since I’ve never been much of a bar goer, for my bachelorette, my bridesmaids planned an afternoon at 4Cats Arts Studio where we were to create sloth mugs/planters molded out of clay. Eight of us attended at a cost of $25 per person. The large group table was laid out with settings for each of us. Once we’d all taken our seats, Michelle led us through the process from start to finish while her assistant handed out extra supplies. 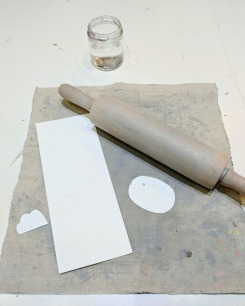 Stations laid out with supplies for our project.

Ready to mold my block of clay.

The project was one that anyone could do. We didn’t have to master the use of a clay wheel. All we needed was clay, templates, a rolling pin, water, a brush, a pointed tool, our hands, and some paint.

I opted to keep texture from the canvas on the outside of my cup. 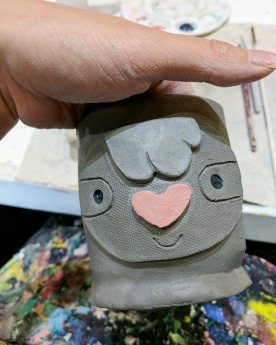 I left everything unpainted except the nose and the eyes.

While we had selected the sloth pattern for our workshop, Michelle was nice enough to show us a number of other possibilities. Most of my friends still stuck with the sloth (every single one looked unique), but a couple of them ventured out and made a bunny or a dog instead. Because of the nature of clay and the fact that our cups still had to be fired in the kiln, we weren’t able to take our creations home right away; I’m definitely looking forward to seeing all of the finished products when they’re ready though.

My friend Michelle was so quick and hers was so perfect!

Ashley made a bunny since it’s her favourite animal.

Lisa made a dog like her puppy Melvin. Alexis’ sloth was super cute, too.

Lilla made an adorable girl sloth. 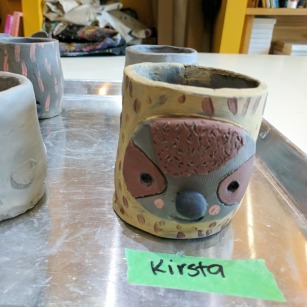 Kirsta decided to give her sloth a tan coat.

Amanda’s made her sloth a bit bigger.

Ultimately, it was a really relaxing activity for about two hours. Admittedly, each person was kind of in their own world at times, yet the ambiance is perfect to gather a larger group for a catch up while crafting. We were warned that the clay could get messy. But, with the provided aprons, we all managed to keep our clothes clean. Our hands were the only things that got a bit dirty (don’t wear your jewelry while manipulating the clay); however, a quick rinse with water was enough to remove any residue.

Gathering inspiration from the others and just concentrating on our pieces.

Fully invested in our own pieces.

I’m not sure if 4Cats Arts Studio is still pre-scheduling many adult workshops into their calendar. Nevertheless, if you’re interested in setting something up for an event or just a fun meetup for your friends and family, it’s an excellent and creative option. Michelle is a wonderful host who provides great instruction and keeps things spirited throughout.

Serving patrons since 1993 – 22 years and counting – The Manor Bistro (@manorbistroYEG) has been a mainstay in the High Street area of Edmonton. I was only seven when it first opened, so I can see why it has become a neighbourhood institution over time. After all, I lived within a five minutes’ drive until I decided to move out and purchase my own condo in the south side of the city.

The new corner I call home is still in constant development and it’s only just beginning to gain some character and choice in the food department. Unfortunately, it really does take a long time to build the kind of community that is seen in Glenora and Oliver. The majority of choices in Terwillegar and Windermere are chains or franchises, so I now realize – more than ever – how lucky we were to have places like The Manor nearby when I was growing up.

It had been ages since I had dined there. However, my good friend’s bachelorette party was held at the establishment last August, and my mom was given a gift card for Chinese New Year this February, which she decided to use to treat my dad and I to lunch.

We happened to be there on a Saturday, Valentine’s Day no less, so it was fairly busy. A parking spot was found just to the side of the building, and of course, we had called ahead to make a reservation (or book through OpenTable, if you prefer), so we didn’t have any problems getting a table. The server/hostess was friendly as she greeted and seated us. 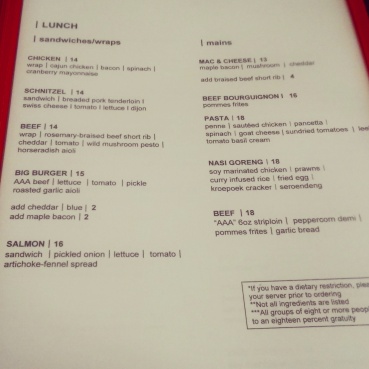 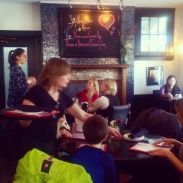 Another view of the main floor dining room. Specials are listed on the board above the mantle.

The sunlit interior of the restaurant, which is located in a house.

A bottle of Mill St. Organic.

Looking at the restaurant menu, I’d call the current selection a cultural mix of comfort cuisine because there’s everything from nasi goreng (clocking in at No. 61 on the The Tomato‘s top 100 list for 2015; they also came in at No. 26 & No. 28 for their cocktails in 2013) to beef bourguignon to schnitzel. It’s actually quite a succinct list of items, but it does span the globe a bit in terms of flavours and techniques.

On this particular occasion, I waffled between a few items, yet ultimately, I decided to go with the king of comfort food: mac and cheese with added braised beef short rib. My dad ordered the schnitzel sandwich with a side of roast pepper chorizo soup, and my mom chose the salmon sandwich with fresh cut fries.

While we waited for our food to be prepared, we were treated to a basket of warm bread with herbed butter, which I really didn’t need to eat, but enjoyed nonetheless (sue me…I love my carbs). Our mains followed shortly after; we were actually surprised at how quickly everything was prepared.

The mac and cheese was served in an iron skillet, which kept the plate hot and the cheesy sauce creamy. It was a rich dish, so I wasn’t disappointed that this was portioned smaller. At $13 without the meat or $17 with, it really isn’t badly priced. The braised beef was wonderfully marinated and tender, the meat shredding easily with just a fork. An extra side of bread was included, and despite having eaten a couple of slices already, I proceeded to top the accompanying mini loaf with cheese and beef. It was excellent and my leftovers were just as good when reheated for dinner later that evening.

I sampled my dad’s schnitzel sandwich, which consisted of breaded pork tenderloin, Dijon, tomato, lettuce and Swiss cheese. The schnitzel was evenly cooked and lightly breaded, so it wasn’t heavy, and the simple toppings made for a delectable, if not subtle winner. After half a sandwich and the bowl of soup, my dad packed up the remaining portion for later. The succulent salmon in my mom’s sandwich was fabulous. One of the worst atrocities in the kitchen is overcooking your meat or fish, but this was perfect. Topped with pickled onion, lettuce, tomato and beet-barley relish, it was a tasty combination of earthy and tangy flavours. The portion size of the salmon was generous as well. Again, leftovers were to be had.

Stuffed to the brim, we had no room for dessert. Although I will say that the tray being shown to the adjacent table was very tempting. We’ll just have to go back to The Manor another time to indulge.

This restaurant has obviously stood the test of time. It has evolved with the seasons, the times and its customers to remain a constant in an area that has seen plenty of change over the years. What I like about the eatery’s atmosphere is that it is at once classy, but also laid back. It’s not stuffy, and neither is the food.