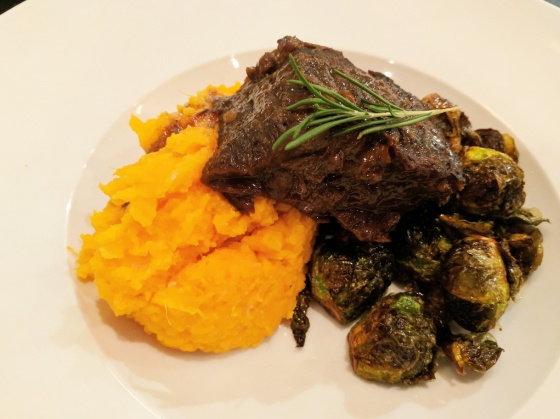 To my surprise, this summer, I was scrolling through my OpenTable app when I came across a new restaurant called Villa Bistro. It was the first I’d heard of it, so I decided to Google the business. As it turns out, the trusty Free Press Bistro on 100 Avenue and 104 Street had been sold and renamed. Villa Bistro’s goal is to serve high-end comfort food, which, in a city that seems to be in the throws of winter for half the year, seems appropriate.

I kept the new eatery in mind for the past few months, and I finally visited with a friend at the end of November after we completed a big Christmas shopping spree at City Centre. We happened to be hanging out downtown on an Oilers game night, so depending on where we parked, we could have ended up paying for it. However, we lucked out by driving an extra block further where we found a spot on 99 Avenue. The payment machine didn’t indicate that it cost anything after 6:00pm. Yet, just in case, we phoned 311 to double check and they confirmed that the zone we were in fell outside of the event area. Bonus! Otherwise, if money isn’t a concern, there is parking in front of the establishment as well as an Impark lot across the street, too.

When we entered Villa Bistro, it was fairly quiet. I’d say there were, at best, a handful of other tables and a couple of bar stools occupied. I noticed the space had been freshened up with brighter walls, new modern floral art (i.e. the ubiquitous succulent), as well as updated tables and chairs. It looked lovely. The host greeted us from behind the counter and told us we could take any available table. We opted for one tucked into a nook by the windows. Once we settled in, the server brought the menus over along with glasses of water.

The food selection has an Italian leaning with entrees that include panini sandwiches or pasta bowls and appetizers of meatballs, charcuterie, and caprese skewers. My friend ended up ordering the Veggie Panini ($15). I indulged by going with the Braised Short Rib ($24). The two of us also shared an order of the Baked Brie ($15).

As we waited for the kitchen to prepare our meal, it seemed to be getting cooler inside the restaurant. I assumed it was because we were next to a window and didn’t think too much of it at first. But, right before our dishes arrived, my friend stepped out into the building’s adjoining hallway to use the bathroom and, when she returned, she confirmed that the temperature had most definitely dropped. The server eventually let us know that what we were experiencing wasn’t the norm. Apparently, the whole building was hit with a heating problem and someone was being called in to fix it as soon as possible.

Despite the cold, we powered through our dinner like the true Canadians we are. My friend was really hoping that her Veggie Panini would be reminiscent of the vegetarian toasties she had when she visited Australia. Unfortunately, that wasn’t the case. The sandwich, consisting of goat cheese, grilled zucchini, mushrooms and red peppers in a balsamic glaze was still tasty. Her one recommendation to Villa Bistro though? The ciabatta bread was barely toasted, if at all. Paninis are supposed to be heated and pressed and this one didn’t seem to fit that description. Coming with the sandwich was a large side of fries. They looked to be freshly made and lightly seasoned.

We quite enjoyed the Baked Brie. Honestly, it’s kind of a hard appetizer to screw up. This one was presented with a whole mini round of brie that was topped with fruit compote (the menu said it was blueberry, but the colour and flavour made me think it was more akin to raspberry). There were six slices of focaccia crostini to go with it. When we cut into the cheese, it was warm and nicely melted with the center oozing a little. The sweet compote paired perfectly with the rich, creamy, nutty brie.

I will give myself a pat on the back for choosing the Braised Short Rib because I think it was worth every penny. The meat was braised in-house until it was tender enough to be pulled apart with just a fork. There was only a minuscule amount of fat throughout the cut, so I was able to eat every bite of the short rib. It was also marinated very well with the flavour completely saturating the meat. Since it was so savoury, the combination of the short rib with a large helping of sweet potato puree was kind of ingenious, providing that important balance. The addition of fried parmesan Brussels sprouts that were charred and crisp on the outside just made the whole thing even better (and provided me with some actual veggies).

By the time we polished off our plates, Villa Bistro had become a literal ice box. Our server was tucked behind the bar with a heater while she wore her parka, and my friend had also pulled on her coat. Otherwise, there was a slight chance we would have hung out a bit longer and had dessert. In those circumstances, however, we couldn’t bring ourselves to stay. We grabbed our bills to pay and then head back out into the winter evening.

I’ll admit that the staff could have offered to compensate us for the inconvenience of eating in freezing conditions. Even though I know what happened wasn’t their fault, it’s still good business practice to acknowledge when something is wrong and to do whatever possible to rectify the situation. The host/server was super friendly and, despite the issue, she did her job pretty well. But, there wasn’t any discount on the bill or anything, which I think another restaurant would have considered. I believe the least they could have done was to offer each of us a hot beverage to keep us cozy as we ate.

Regardless, I hope that Villa Bistro’s building has since fixed the problem and that every visit hereafter will be much more comfortable. While the establishment is still coming into its own and there’s always room for improvement, they’re on the right track. With good service, a fantastic location and delicious food, they can expect to grow a wealth of regular customers.