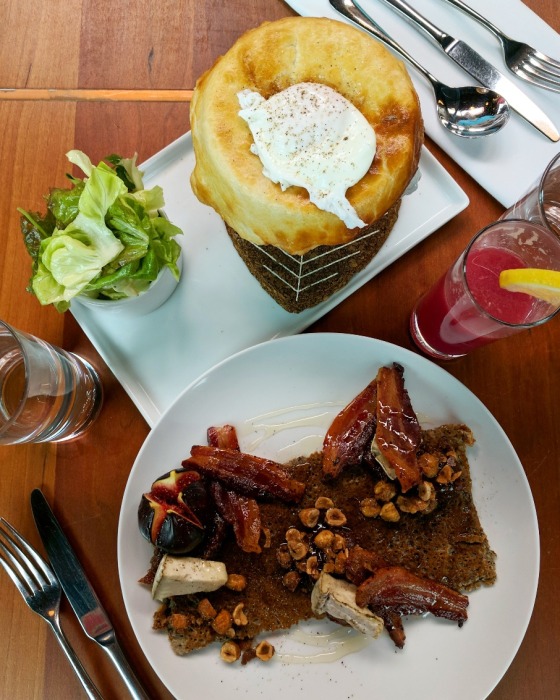 Well into its second year of business, Café Linnea has already accomplished a lot as far as new endeavours go. Being the brainchild of the owners behind Duchess Bake Shop, it’s no wonder that what started off as a local brunch destination (now also open for dinner) has become a favourite within Edmonton as well as on a national level. In 2017, Air Canada named it the sixth best new restaurant in the country. The accolades have been steady, and, with that, so has the hype.

During a busy day scouting out venues across the city, I decided to drag my fiancé here for sustenance. We arrived at around 10:45am on a Saturday morning. From what I understand, Café Linnea works on a first come, first serve basis. Reservations are only taken for large groups and, even then, they set aside a the majority of tables for walk-ins. Still, we had good timing because there was no one ahead of us and we were seated within minutes.

Once I settled in, I examined the room. It kind of has this outdoors brought indoors look with greenery inside a low concrete planter wall, skylights, big windows, retro chairs, bright white walls with splashes of colour, and natural wood tables and shelves. I totally think of minimalist Scandinavian design when I view it, and I suppose it’s meant to match the Scandinavian inspired dishes.

Brunch at Café Linnea has become a favourite for many Edmontonians. 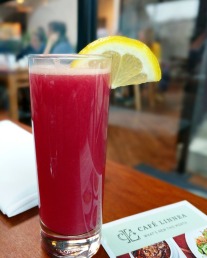 We perused the menu. While my significant other opted to stick with water, I decided to splurge on a glass of their feature juice ($6.50). On this particular day, it was a lovely deep pink that tasted like grapefruit and raspberry. If I remember correctly, I believe there was also lychee in there as well. However, I couldn’t taste it. Overall though, it was refreshing. I just wish the glass was bigger for something that costs so much.

Turning our attention to the food, my fiancé chose the Chicken Pot Pie ($22) and I went with the Fig & Cheese Galette ($17) with added House Bacon ($5). Both of these selections are considered mains, so they are meant to be filling. 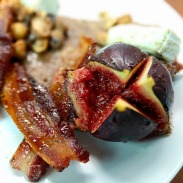 A close-up of the fig fruit

I have to say, the Fig & Cheese Galette isn’t quite what I was hoping for. The menu description is detailed: “A buckwheat crêpe with fresh honey roasted fig, fig compote, today’s selection of soft, French cheese, smoked hazelnuts, finished with a drizzle of honey.” What I thought would be a mix of savoury and sweet, fell towards the latter.

There was way too much of the fig compote. I’d hazard a guess that they simply emptied out a whole jar of the compote with giant dollops placed right onto the slightly flavourless grainy crêpe. The extra honey simply took the sugariness to another level. The smoked hazelnuts and the cheese helped to a point, but, in the end, they failed to provide enough of a balance. The best part in an otherwise mess was definitely the honey roasted fig, which I loved for the natural flavour and texture. Thankfully, I listened to the server’s suggestion about the bacon. Without it, I would have been severely disappointed in this dish. The house bacon brought a necessary saltiness that offset all of that sweetness and saved my meal. 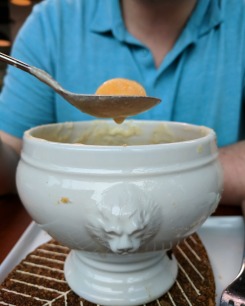 Consuming the contents of the bowl of Chicken Pot Pie.

On the other hand, the Chicken Pot Pie was a winner. As described by my future husband, it was “like the equivalent of a peaty scotch — complex, subtle, and smoky.” This was absolutely delicious. Although I could have done without a couple of full-on bites of pure fat from the meat used (not a fan of that type of mouthfeel), everything else about it was fantastic.

The poached egg atop the flaky pie crust broke open to reveal a gorgeous runny yolk that seeped right into the bowl of béchamel sauce that lay hidden beneath the pie top. The sauce itself came across like a delicious creamy soup and the veggies that resided there were cooked until perfectly tender. The accompanying green salad had an earthy flavour and a light vinaigrette, but it was so tiny. Unless there’s enough salad to truly help one get their greens in, it may as well have been omitted. The Chicken Pot Pie is definitely for diet cheat days, not for those wanting a healthy brunch.

Before we made it to Café Linnea, I had fully intended on ordering a starter or a dessert to build a complete picture. Yet, by the time we finished our plates, there was no way I could squeeze in anything more. So, at this point, what I ate has me sitting on the fence between all of the good publicity they’ve received versus the reality of our experience. Regardless, Café Linnea does have a great atmosphere and pretty decent service even if the food is somewhat hit or miss. I’ll probably have to give it another go down the road (I’ve got my eye on their Tuesday Prix-Fixe dinners). In the meantime, I stand by what I’ve said here. If one plans to visit, you’ve been forewarned about the Fig & Cheese Galette.