Last year, Edmonton was abuzz with news of a new Korean-Japanese fusion restaurant called Jang located at 11212 Jasper Avenue. They were getting rave reviews from visitors, and I fully intended on trying it out. But, before I knew it, the eatery had been replaced by a spot called Izakaya O-Tori. Being a fan of Japanese ramen and sharing plates, I decided to drop by during a recent date night. 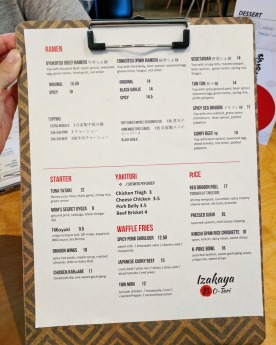 From what the server told us, it turns out that the business is still run by the same people who launched Jang. They simply opted to change their menu. Because of what is now served, they also chose to rebrand with a different name to better reflect the updated items. Now, Izakaya O-Tori holds more similarities to what you might find at their southside sister restaurant, Menjiro Ramen, just expanded.

Therefore, in addition to the ramen bowls — available with either beef (Gyukotsu; not typically the norm for ramen) or pork (Tonkotsu) broth — you can indulge in yakitori (meat skewers), a variety of waffle fries, a poke bowl, or pressed sushi. Kirk and I both went for some ramen; he ordered the Spicy Gyukotsu ($16) and I went with the Black Garlic Tonkotsu ($14). We also shared the Red Dragon Roll ($17).

I guess the first thing I’ll note is that the Spicy Gyukotsu is somewhat pricey considering the portion size. I don’t think that the bowls are quite as hefty as what you might get at local fave, Tokiwa Ramen, yet it’s more expensive. Kirk also wasn’t super keen on the roast beef that came with it and he thought the broth wasn’t hot enough. On the plus side, I sampled the soup and I found it to be incredibly creamy and rich in flavour with just the right amount of heat on the palate for me.

In comparison, the Black Garlic Tonkotsu broth was also smooth, but felt lighter overall. Packed with umami flavour, the springy noodles married very well with the soup and the huge slice of succulent pork belly. Joined by half of a seasoned egg, bean sprouts, green onion, fungus, and red onion, the bowl provided a landscape of textures that delighted and satisfied. I thought my broth was hot enough, too; however, I’ve never liked my food scalding, so to each their own in that respect. 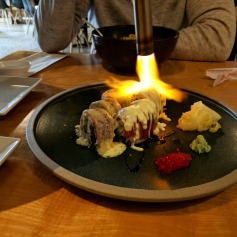 Red Dragon Roll being torched at the table. 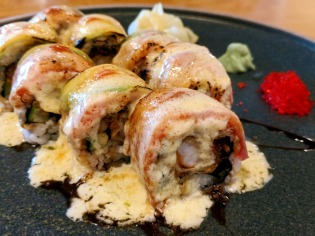 Despite the tasty ramen, the star of the show really was the Red Dragon Roll, a large maki made with shrimp tempura, cucumber, spicy creamy cheese sauce, ahi tuna, and avocado. It was laid in front of us and then torched at the table until the tops of each piece had been delicately seared. Kirk is slowly coming around with more of the raw fish, so it helps when there’s even a slight bit of cooking applied to sushi. He absolutely loved this dish and told me that he would have been happy to eat the whole thing, if he didn’t have to save some for his better half. Admittedly, I felt the same way. 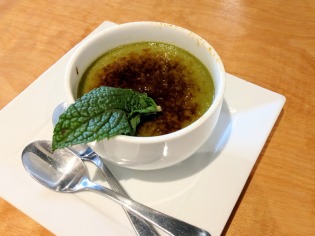 To finish off our meal, I selected the Matcha Crème Brûlée ($6). The sugar top was caramelized nicely and, once cracked, it gave way to a soft-set pudding-like custard. It was heavily flavoured with green tea, which was perfect. The worst thing is not having a strong enough taste, and thankfully, that wasn’t the case here.

The interior of Izakaya O-Tori

We enjoyed our meal at Izakaya O-Tori. It’s clean, the service is great, the decor is simple, and the food is comforting. The only thing we thought was odd was how empty it was for a Saturday night. Hopefully word gets out about this place. We can never have too many ramen shops in town!