The giant plate of Carbonara pasta.

Always looking for a deal and to try somewhere new, my fiancé and I recently ended up at Nello’s Cucina Italiana in St. Albert. We stopped in to use our dinner Groupon on a Sunday night at 6:00pm. We had reserved a table in advance to ensure a spot; however, it wasn’t actually all that busy during that hour.

The interior of Nello’s. 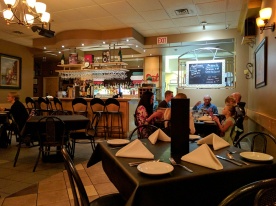 The bar in Nello’s is towards the far side of the room.

It’s a cute, inviting restaurant with a bit of a European flair: warm lighting and wall colours, tiled floors, and paintings of Italian landscapes. Nothing fancy, just relaxed and casual. As we were left to make our decisions, I took a look around. There was a table of two about to leave with a huge bag of leftovers. Then, a few minutes later, the guests seated next to us received their dishes. The portions were massive. This was not going to disappoint.

In the end, my fiancé opted for the Pollo Parmigiano ($23.50) and I selected the Carbonara Pasta ($22). We both stuck with water for the evening, and complimentary bread with butter was provided to start. 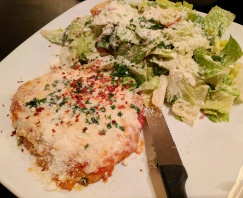 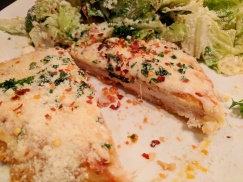 Look at how cheesy the Chicken Parm is.

Considering that the Pollo Parmigiano really doesn’t come with a whole lot other than a flattened breaded chicken breast topped with tomato sauce, parmigiano, and mozzarella cheese that is then baked in the oven, this was still quite filling. To go with the chicken, there is a choice between the Di Casa (house) or Caesar salad. He went with the latter of which they certainly gave a generous amount, especially when taking into account the size of the plates used to serve all their meals. I found the greens in the salad to be quite fresh. There was plenty of dressing to coat everything. The croutons were crunchy and buttery and I enjoyed the bacon bits for that added saltiness. Along with the salad, the chicken had been sprinkled with extra Parmesan for good measure. Dried chili flakes finished it off. Personally, I think the ratio of tomato sauce to melted cheese was perfect. It created a seal that kept the heat in the meat, and added that unmistakable heartiness to a very comforting dish.

Getting ready to take a bite of carbonara pasta.

Arguably though, the pasta options are where patrons will find the best value for their dollar. Sure, pasta is pretty inexpensive to cook at home. Yet, when it comes to restaurant quality pasta, Nello’s most definitely does not skimp. I swear that the pile of Carbonara that was placed in front of me was almost the size of my head (the pictures don’t do it justice). It was a giant plate of spaghetti sautéed with chopped bacon, mushrooms, fresh herbs, parmigiano, and eggs. As expected, it was relatively salty. Nevertheless, the sauce was pretty creamy, and every single bite was enhanced by the bacon and/or mushrooms. As my fiancé noted, by the time he finished eating, it appeared as if I had still barely made a dent in my supper. At least half of it was packed up to go (and reheated as dinner for two the next night).

A slice of the tiramisu for dessert.

Had I kept on devouring my food, we wouldn’t have had room for dessert. It seems that their usual offerings include either a Crème Brûlée ($9) or Tiramisu ($10). We chose to share an order of the classic Italian sweet. Seeing as how I dislike coffee and anything flavoured that way, it really was atypical for me to go with the tiramisu. But, my fiancé favoured it, and I was willing to give it a try. For the most part, it was alright. I would have preferred more ladyfingers. The thin layer of cookies used didn’t soak up enough of the liquid, leaving behind a small pool underneath that made the dessert somewhat soggy. Otherwise, it was surprisingly light enough on the coffee that I didn’t mind the taste much.

Overall, our time at Nello’s was wonderful. The service we experienced was kind and attentive, and the kitchen must have a great rhythm as we were in and out in just over an hour. However, I expect that if the intention of one’s visit is to hang out for the whole evening, the establishment wouldn’t have any issue with that. It comes across as a place where family and friends can feel free to catch up with each other over food and drinks. It’s also hard to beat some of their daily specials, such as Bring Your Own Bottle Mondays (no corkage on wine), All You Can Eat Pasta on Tuesdays (this one had me intrigued), and Kids Eat Free Sundays. This is a spot that my fiancé and I can now add to our favourites.