In mid-December, I took my boyfriend to Black Bull Kitchen & Bar (16642 109 Avenue) for dinner. It was our first visit and, again, it was all due to a Groupon I had on hand. We made our way there immediately after work, so we arrived pretty early at around 5:00 pm.

When we walked into the establishment, it was empty, save for someone hanging out at the bar. The single server greeted us right away though and let us choose our own table while she grabbed us some menus.

As soon as we were settled, I mentioned that I had the voucher that covered dinner for two people, and she took the time to explain how it worked. In our case, we were each able to order a virgin cocktail and an entrée valued at up to $32. The thing is, the majority of their dishes only cost about $13 to $25. Only one option would have maxed out the deal on its own: the 14 oz. T-Bone Steak. However, our server let us know that we could add upgrades to the plates until they totaled the full value, which was fantastic.

While my boyfriend sipped on his Caesar and I on my Pina Colada, we studied the menu. Ultimately, we both opted for the 10 oz. New York Striploin ($25). It comes with a side of veggies as well as a choice between garlic mash (the winner on that evening), home cut fries, or rice. He decided to order extra shrimp ($5) and I selected the lobster tail ($7).

The food was prepared in a decent amount of time. They weren’t plated super fancy, but the dishes had pretty pops of colour from the carrots, broccoli, shrimp and lobster. Atop the seafood was a big dollop of butter. Surprisingly, there was also a slice of garlic bread accompanying everything as well. 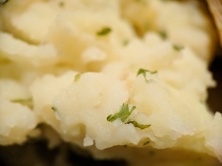 I’ll get the bad out of the way first. Although the lobster tasted fine, it was severely overcooked. It made it incredibly difficult to pull the meat from the shell and, when I did get any on my fork, it was relatively dry and rubbery. That was unfortunate. I probably should have mentioned it to the restaurant while we were there, but I didn’t do that.

On the other hand, my boyfriend told me that his shrimp were great (he ate them all so quickly that I didn’t have a chance to sample any). Our plates came out piping hot, too. The steaks were both prepared as requested — medium rare for me and medium well for him. They were succulent with very little gristle, meaning almost nothing was wasted. I especially liked the charring on the top and bottom of the steak that helped to sear in the juices, keeping the meat tender and flavourful. 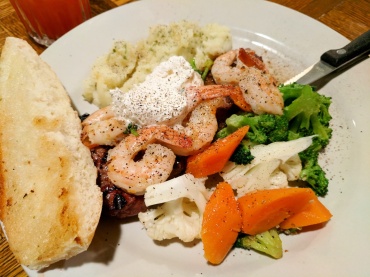 My steak was cooked to a perfect medium rare.

I have to say that the vegetables were kind of pedestrian. They seemed to have been steamed and had little flavour. I doused them in the butter from my lobster to make them a bit tastier. I thought the bread was alright as it was a bit toasted and had enough garlic butter without being overpowering. The garlic mashed potatoes were excellent. They were creamy, the seasoning came through well and the herbs that had been mixed in just elevated them a little more.

In the end, I’d say that Black Bull Kitchen & Bar is a serviceable location. Nothing we had was out of this world good, and the chefs can certainly show some improvement when it comes to lobster. Otherwise, everything else was passable and the portions were generous. It’s comfortable, clean, bright, well-decorated and totally seems like the classic neighbourhood hang out. If anyone has a voucher, I’d definitely recommend giving this place a shot. If that’s not a possibility, still stop by and grab something more affordable than steak off of the menu. I’ve heard that their burgers and pizza are worth a visit.