The Time’s Up statement as posted on their @timesupnow Instagram page.

It’s a brand new year. Instead of starting it off by doing the same old thing on this blog, I felt like this would be a great opportunity to share a few of my thoughts about an increasingly important topic.

I first heard of the Time’s Up movement when I was sitting at home on January 1. As I scrolled through the feed on the Instagram search page, I noticed a number of posts from my favourite celebrities where they each shared the same letter of solidarity to their “sisters” (scroll down for the full post).

Then, on Sunday night, the 75th Golden Globe Awards ceremony was aired on television. Before I took the time to watch the recording of the show, I happened upon pictures posted to social media of the fashion choices at the event. Photo after photo popped up of all of these females in the entertainment industry dressed in black. It was far from the usual colourful parade, so I questioned what I was seeing. I wasn’t aware that this was something that they had planned back in December, but they did. What the world saw that evening was a sea of gorgeous women that varied in age and ethnicity coming together to make a big statement.

This comes after the huge upheaval that Hollywood has been experiencing whereby women seem to have finally taken a stand. They have found their voices and they are feeling empowered. Time Magazine essentially picked the #MeToo movement (a.k.a. The Silence Breakers) as it’s “person” of the year.

Tarana Burke, the creator of the Me Too movement, was showcases on the @time Instagram page.

This show of comradery at an annual industry celebration apparently worked to change the conversation. No longer were actresses being asked what they were wearing on the red carpet. Instead, they were creating a dialog, talking about the reason behind their choice to participate in this movement and, for the first time in a long time, pulling the focus away from the relative artificiality of these typically self-congratulatory parties.

A few women chose to wear colours other than black. Obviously, they stood out like sore thumbs, seemingly out of sync with everyone else. However, their reasoning had validity, so I don’t fault them for anything. Plus, it’s not doing us any service to pit women against other women. They all stated their support for the movement and the women who chose to wear black. If anything, we have to question why this is even a necessary thing for women to have to do. Woman should be able to express themselves in whatever way they choose. It shouldn’t take an army of them dressed in the same hue to get their message across.

On the other side of things, it may also seem like these women were just a bunch of rich, privileged celebrities removed from regular society who decided to speak on behalf of those who may be more marginalized. Yet, I still have to give them props because they understood the value of a global platform and they utilized that stage to share their voices and the voices of other disenfranchised women. If these actresses are using their fame for something good that will benefit the many, I say it’s okay. 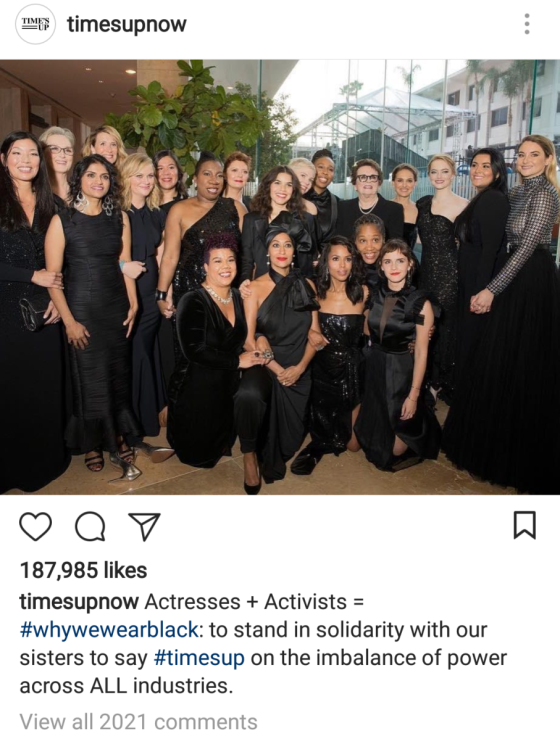 Some of the actresses and activists that took part on Sunday. Photo screenshot from the @timesupnow Instagram page.

Most memorable during the ceremony was Oprah. She received the Cecil B. Demille award, an accolade which has existed for the past 66 years. Over that period of time, only 15 have been handed out to women and this was the first given to a woman of colour.

Oprah’s speech was a rousing one that had everyone talking the next day. She eloquently spoke to the crowd and the audience watching and it really did make me hope that she’d run for President one day. Let’s hope that Seth Meyers’ cajoling during his opening monologue actually convinces her to do so.

What’s sad is the discussion my friend and I had the following day though. While we both love the idea of Oprah running for the presidency, she is both a woman and someone of colour. Those two things have traditionally been deterrents for many American people. Despite Oprah’s ability to overcome adversity, her poise and intelligence, her generosity and her business savvy, it’s possible that the odds would still be stacked against her. In this day and age, it’s pretty depressing to think about the fact that having two X chromosomes and a different skin tone are the reasons to hold someone of that magnitude back.

Therefore, I sincerely hope that the Time’s Up movement and these outspoken women of celebrity help to spur this burgeoning revolution. These are conversations that are worthy of our time and they should spread like wild fire because it’s the 21st century. Women and minorities should no longer be seen as second-class citizens. We should all be considered true equals.

The letter of solidarity posted on the Time’s Up website.