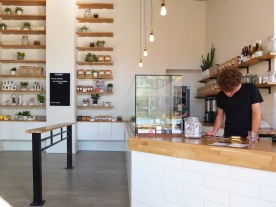 Line up here to order in the mornings. 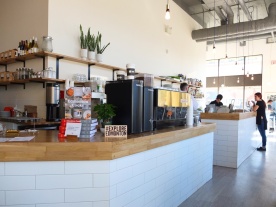 The bar wraps around to an open kitchen space.

District Café doesn’t always immediately come to mind as a place to go for supper. When it was first opened, it was a tiny coffee shop with little room for patrons to stick around. Yet, since expanding into a full-service eatery, it has become a much more welcoming bright and airy space for guests to linger over an all-encompassing menu of food and drinks.

Prior to this past week, I’d only ever visited for drinks and snacks with friends. Therefore, I was eager to have a complete meal on this particular occasion. Although District Café is known for their tasty brunch, I’d argue that the latest dinner menu from chef Spencer Thompson (previously of Alberta Hotel Bar + Kitchen) gives the day’s earlier items a run for their money.

My friend and I walked over to the restaurant right after work on a Friday afternoon. The sign at the door indicated that we could seat ourselves, so we headed straight in. The majority of the tables were already occupied. Thankfully, there were a couple of spots available towards the far side of the venue.

As soon as we sat down, a server brought glasses of water and some menus over. He also answered our questions about the evening’s specials. In the end, we decided to stick with non-alcoholic beverages. While my companion quenched her thirst with a glass of lemonade ($3.50), I opted for a bottle of the Jamaican Ginger Beer ($3; spice that lingers in your throat!). We also selected the Roast Eggplant ($13) as an appetizer to share.

The full order of Roast Eggplant at District Cafe & Bakery.

A focaccia triangle topped with ricotta and roast eggplant, zucchini and tomatoes.

The Roast Eggplant is an ideal starter to split. It came with four slices of lightly toasted focaccia that had been brushed with olive oil. Rounds of salted eggplant, pieces of zucchini and halves of tomatoes lingered next to a dollop of house made ricotta. When I think about it, it’s really such a straightforward plate, but it’s done so well. All of the veggies were roasted to the perfect point. Combined with the creamy ricotta, my first assembled portion was to die for. 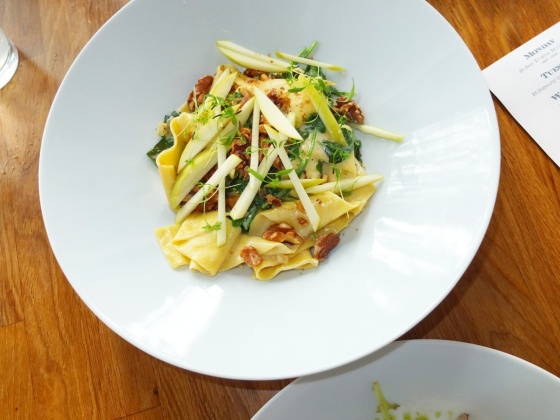 Next up were the entrees. We’re big fans of fresh pasta, so it was a no-brainer for my friend. She went for the featured Hand Cut Pasta ($18) without any added meat. Large, broad, flat pappardelle noodles were evenly coated in a buttercream sauce and tossed with roasted walnuts, apple and arugula. I ate a mouthful of the pasta and it was unexpectedly refreshing and summery for what would typically be considered a denser dish. The merging of bitter arugula, sweet apple and nutty walnuts were a match made in heaven. 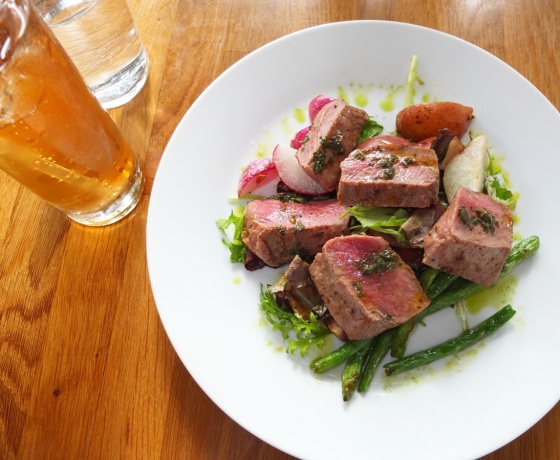 As a home cook (I doubt I should even call myself that), I often refrain from making dishes that have a meat component to them as I dislike handling the food. For that reason, when I indulge in a meal out, I tend to go for things I wouldn’t otherwise have on a regular basis. In this case, I chose the Flat Iron Steak ($20). Upon ordering, I indicated to the server that I would prefer the steak to be medium-rare. He let me know that the meat is prepared sous-vide, so they were unable to cook it exactly as requested. Nevertheless, he assured me that if I enjoy a medium-rare doneness, it would probably be to my satisfaction.

He certainly wasn’t wrong. In fact, the Flat Iron Steak came out just right. The meat was still pink in the middle and the pieces were succulent enough to cut through them with a butter knife. Generous helpings of steak were accompanied by a tomato arugula salad with roasted green beans, potatoes and radishes. Mint chimmichurri provided another element that helped to keep it seasonal to spring and summer.

Now, I’m sure we would have been okay leaving after those three satisfying dishes; however, I knew that I’d be kicking myself later if I didn’t have some dessert. Indeed, I had two. Okay, three, if you count the sampling I had of my friend’s cake. 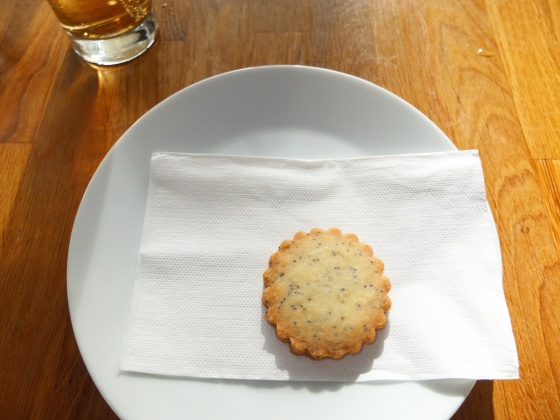 The first was one of the bakery’s Lemon Poppy Seed Shortbread cookies ($0.50). I’m not sure I loved the texture. I like shortbread to have that melt-in-your-mouth sensation. This one wasn’t quite as buttery, but the strong taste of lemon made up for that.

As far as cakes go, the Salted Caramel Chocolate Cake ($7) that my friend ordered was truly decadent. The layers of cake were unbelievably moist yet fluffy. It was rich in flavour and the frosting was sweet, but not overly so. It’s one of the best chocolate cakes I’ve eaten in a long time.

Where I think District Café’s pastry chef really excelled was with the Orange Blossom Pavlova ($10). The foundation of the dessert was a giant meringue cookie. In the center, it was filled with a thick layer of custard that was dotted by vanilla bean. A mix of fresh fruit (blueberries and peach this time) and sliced almonds decorated the top. Then it was dusted with powdered sugar and served with caramel sauce on the side. The edges of the meringue dissolved on the tongue; the middle of the cookie remained a bit chewy. Not only was it beautiful, it was sublimely delicious.

District Café has kept things simple and succinct. The menu caters to many while staying focused. Personally, I believe it’s better to do a dozen things exceptionally well than to do many things halfway. Here, at District Café, with the current chefs and their offerings, I’d say that they’ve managed to achieve the former.