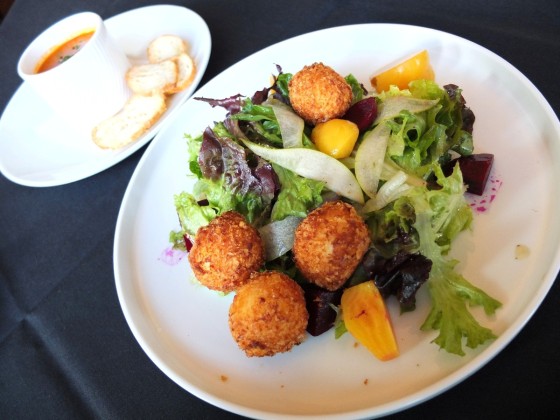 Dismay was the general consensus when Tavern 1903 folded towards the end of 2014. The restaurant was popular with patrons and, thus, there was a bit of disbelief when word spread of its closure.

I had only been to Tavern 1903 once, but I enjoyed the food and the sunny patio during the summer, and I had looked forward to going back. What I especially liked was the idea of Edmonton businesses having invested in the restoration of this historical building on 98 Street and Jasper Avenue that used to be the Alberta Hotel. My fear was that it would be shuttered and the gorgeous bar wouldn’t see the light of day for who knows how long.

Less than a year later, my bartender friend, Clayton, told me he was starting a new job at the Alberta Hotel Bar + Kitchen. I’m often clueless about new places until someone tells me about it or I read an article or blog post, so I had him confirm my assumptions about this establishment’s location. Sure enough, it was taking over that same spot vacated by Tavern 1903.

Beyond excited, I reached out to owners Spencer Thompson (Chef de Cuisine) and Brandon Baker (General Manager) to discuss another story. During that same time, they were in the midst of their soft opening. I didn’t visit over the first few weeks they were open. However, from what I was hearing through my friends, something great was in store for me.

Finally, for the official grand opening on November 19, I made my first trip to Alberta Hotel Bar + Kitchen. 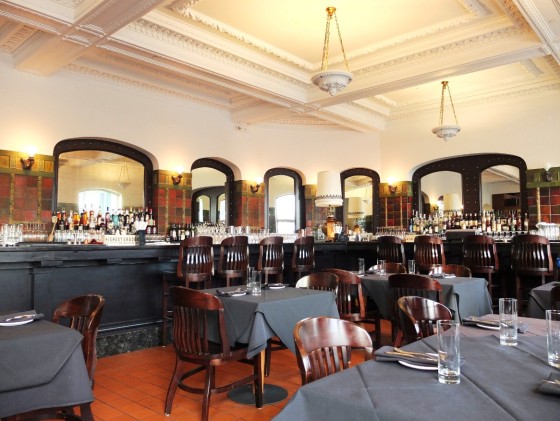 The historic and gorgeous lounge and bar.

As expected, the space has changed little since Tavern 1903. Knowing that the bar and lounge was reconstructed using the actual building blocks – tiles, chandeliers, lamps, etc. – of the original Alberta Hotel, it would have been a travesty to tamper with any of that. So, they did the right thing and kept the venue as is.

Upon arrival, we were greeted at as we stepped into the door. The restaurant had my reservation in its OpenTable system and we were promptly seated in the dining room. I was worried that the dimmer lighting would prevent me from taking some decent photos on my phone that evening, but it worked out okay in the end.

Our server, Joanne, popped by to fill our water glasses. Then she asked us if we were aware of the options for the evening – a set menu or a la carte. My friend and I had come specifically for the grand opening because, for one night only, they were presenting a three-course dinner complete with an amuse bouche and a glass of bubbly (the drink was not advertised beforehand, so it was a happy surprise) for the affordable price of $55.

The menu was laid out with three choices per course, creating a few difficult decisions for us. My friend opted to start with the Bone Marrow Agnolotti. I chose the Duck Duo as my appetizer. We both ordered the Pembina Pork Cheeks as our entrée. For dessert, I chose the Pear-Almond Frangipane (Joanne said it wasn’t as sweet as the AH Banana Smores) and my friend selected the Cheesecake. 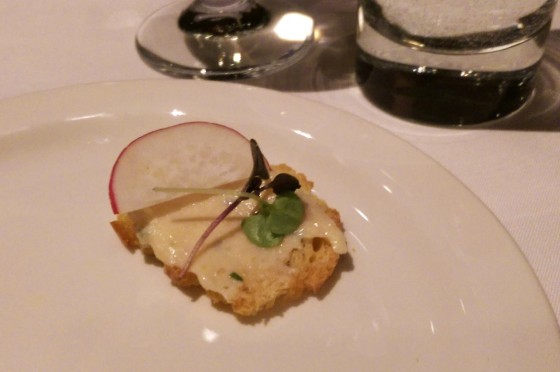 While we waited for our first course to make its way from the kitchen, we sipped on our champagne. Joanne showed up again shortly after to drop off the amuse bouche (a complimentary canapé from the chef). Before she walked away, we asked her what was on top of the crostini. It turns out that it consisted of lobster, which my friend has an allergy to. Thank goodness we took the initiative to find out before she went ahead and ate it. Throughout the evening, the service was pretty impeccable. This was the only misstep.

Our first courses were brought over by Brandon (whom I recognized from a couple of photos on the restaurant’s Facebook page). On initial glance, the dishes were plated nicely and the servings were sizable. As is typical of my friend and I, we sampled each other’s food. 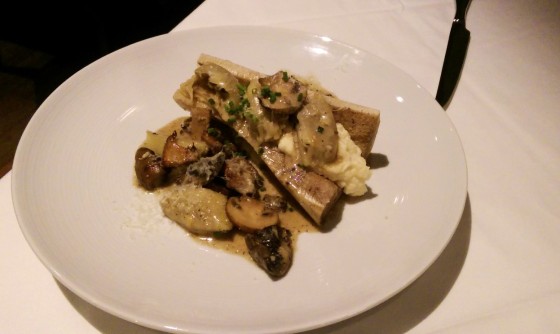 The Bone Marrow Agnolotti was stellar. The pasta shells didn’t really stay intact, but I liked that the pasta was thin and light, not doughy. Stuffed inside the shells were wild mushrooms and bone marrow. The acidity from the bone barrow worked well with the earthiness of the mushrooms. There was some additional marrow to be found in-bone, along with more mushrooms, brown butter sauce and pecorino cheese. To finish off the plate, there was also a cloud of celery root puree. My friend scraped every last bit of food off of her dish, saying it was like heaven. 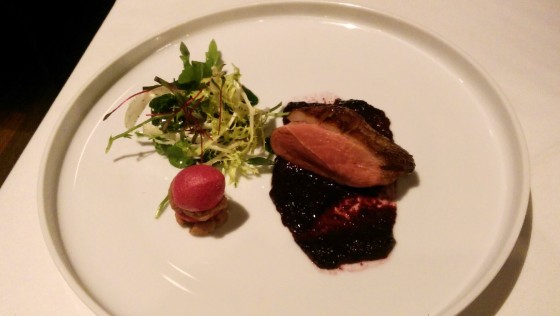 I later learned that the duck duo was new on the menu, and it was neat. I hope that it’s a dish that they’ll offer again. This plate included a combo of smoked duck breast served over Saskatoon jam and duck pate sandwiched between a beet macaron. The duck breast was incredibly tender; it was cooked just enough to get a touch of smokiness without overtaking the natural flavour of the meat while the Saskatoon jam provided overall balance. The pate was smooth and paired well with a melt-in-your-mouth beet macaron. It was different and creative. 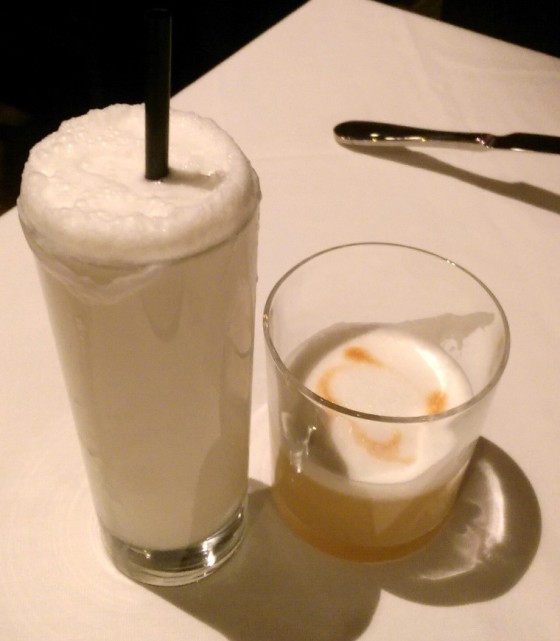 In between finishing our appetizers and receiving our entrées, we headed over to the bar to say hello to Clayton who happened to be bartending that night. My dining companion asked him for a recommendation and he inquired as to what sort of liquor she likes. She told him that she likes whiskey sours and he was glad to whip something up for her. I went for a cocktail off of the curated menu, the Ramos Gin Fizz, which was created in 1887 by Henri Charles Ramos. It’s great to know that the Alberta Hotel Bar + Kitchen has knowledgeable people like Clayton behind the bar and Brandon who has refined the drink selection. 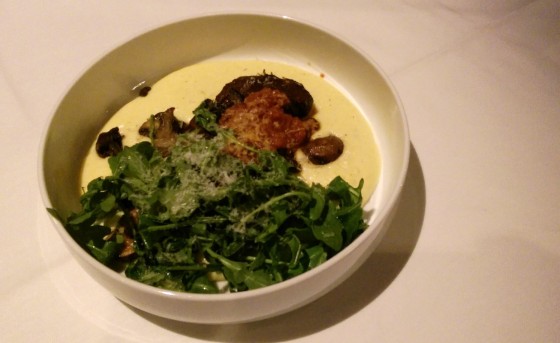 Pembina Pork Cheeks (this is not the best photo)

The comfort quotient was met during the main course of Pembina Pork Cheeks topped with tomato jam and served with buttermilk polenta, wild mushrooms, arugula and local pecorino. The polenta was the creamiest I’ve ever had. It felt rich and decadent. That, along with the earthiness and bitterness from the mushrooms and arugula, leveled out any saltiness from the meat, which fell apart at the touch of our forks. The kitchen provided a hefty portion, too. Although we most likely could have had a few more bites (it was that good), what we got was enough when you consider that we still had dessert on the way. 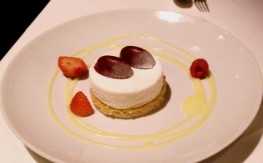 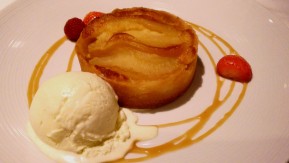 I took a small forkful of cheesecake from my friend. The cake had an almond sponge bottom and what looked like two chocolates on top (that was probably the red currant jelly that was listed on the menu). There was also some lemon curd on the plate as well. I didn’t catch all of the flavours that were included in the dish. I only tried the cheesecake, but it had a wonderful velvety texture that wasn’t overly dense. My Pear-Almond Frangipane was paired with a lovely olive oil ice cream. The poached pear slices on top were great with the pastry, but this is a heavier dessert, and the last few bites were almost more than I could handle.

While I wasn’t necessarily more restrained during lunch the following day, I specifically chose items that I hadn’t eaten the night before, and I avoided stuffing myself with fillers like fries and crostini.

Janell(e), who was serving me, seemed educated on the menu and she was ready to give me suggestions, if I wanted them. However, I kind of already had my mind made up. 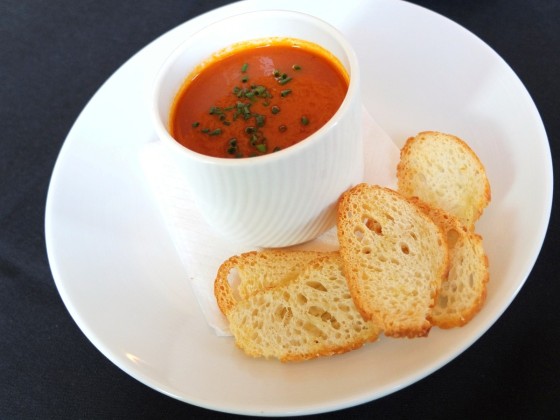 A cup of Lobster Bisque

Lunch began with a cup of lobster bisque, which was delectable. Made sans cream, the tomato base created a soup that was more distinct. The tartness from the tomato helped to elevate the flavor of the lobster without masking it. There was also a bit of heat to the bisque (if we’re talking temperature-wise, it stayed warm until I was finished); a nice pepperiness that took it up another notch. The soup was served with five pieces of crostini. I only ate one of them. They’re a slightly more upscale version of a package of Premium crackers, which I love crumbling over my soup every so often, but I needed to save space for the rest of my food. 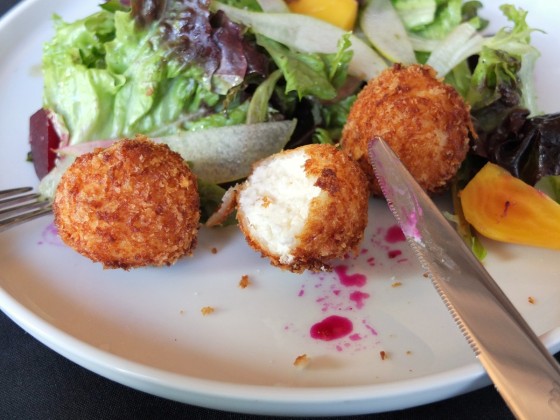 A close-up of the Beet & Chevre Salad

I followed my soup with the Beet & Chevre Salad. This is a good starter because it’s satisfying, yet it’s still light enough that you’re able to continue on to a main dish. The salad contains pickled candy stripe beets, greens, fried Fairwinds Farm goat cheese, pears and dill vinaigrette. I found that the acidity coming from the beets and vinaigrette was complimented by the subtle taste of dill and offset by the thin slices of subtly sweet pear, the bitterness of the greens and the savoury fried balls of creamy goat cheese. 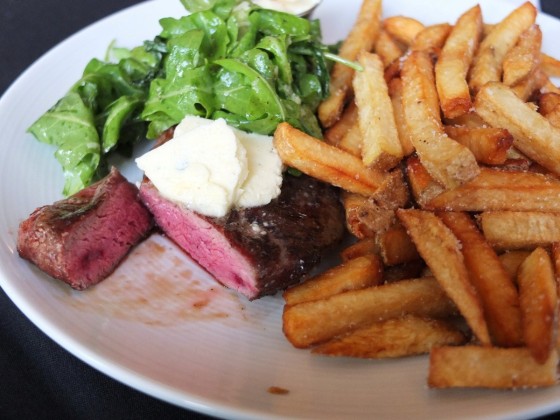 My meal continued with an order of the Flank Steak & Frites. The steak was plated with a large portion of fries, a little bowl of garlic aioli, blue cheese butter and arugula-pecorino salad. Admittedly, I was skeptical about the blue cheese butter. I love cheese, but I’ve never been a fan of the pungent blue cheese variety, so I stepped out of my comfort zone with this. Despite my usual aversion, the blue cheese worked because it was incorporated into the butter, which melted right on top of my perfectly cooked steak (a quick note: I wasn’t asked how my steak should be cooked, but it came out a wonderful medium-rare; I lucked out, but the servers should be reminded to ask patrons about this, so that the meat is prepared the way the guest wants it). The cheese wasn’t overwhelming in taste or smell. This dish was also a good test since flank steak is a tougher cut of meat, and I have to say that the kitchen did well with it. It was by no means the tenderest steak, yet it wasn’t at all chewy either.

Focusing on the sides, I always enjoy some arugula. Although, this salad had the same dill vinaigrette as my appetizer (they could have changed it up with a different flavour accompaniment). The only alteration was some added pecorino cheese on top. That helped to anchor the salad and marry it with the steak. I only had a handful of the fresh made fries, which were crisp on the outside and soft on the inside as they should be. However, I thought they were overly salted, so they could have used a lighter touch there. If you eat the fries with the supplied garlic aioli, you don’t need the added salt at all.

My visit was made complete with a tasting of the banana ice cream, usually served with the aforementioned AH Banana Smores. It’s made in-house using liquid nitrogen. The flash freezing creates an exceptionally creamy texture and locks in that unmistakable flavour. I’m definitely going to have to go back for the full dessert. 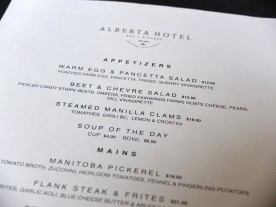 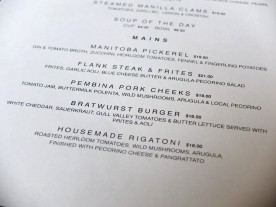 All-in-all, there are a couple of minor kinks for the restaurant to work through. But, considering that they’ve only had their doors open for about a month through a soft opening and then their grand opening just last week, everything is going swimmingly. From the food to the drinks to the service/staff, they seem to be hitting all the right marks.

Let’s hope that they continue on this path. I’d hate to see the Alberta Hotel Bar + Kitchen go.

For a more in-depth look at this establishment, visit The Local Good to read my profile of Alberta Hotel Bar + Kitchen.