KB & Co, found on the main floor of the Fox Tower building on 104 Street, is relatively new. I’d heard about their health-conscious menu through word-of-mouth recommendations from friends; their smoothies and smoothie bowls often coming up as items to try.

After some delay, I made a point of planning a recent lunch date at the eatery. It’s strictly a fast-casual business with the counter set up for orders to be placed at one end and picked up on the other side. Once items are collected, the take-away packages can be carried out. Or, there’s also the option of eating in-house at one of several tables inside the space or outside on the sidewalk patio. Either way, the food is provided in disposable packaging without the choice of reusable plates or cutlery. I thought that it was interesting to see that a business that prides itself on the idea of wellness and sustainability would decide to use takeout only containers and bags, even if some of it is eco-friendly.

That aside, I was there to try the food. As much as I wanted to sample a smoothie bowl, I felt as if something less liquid-based would be more appropriate for lunch. Since I had perused the menu beforehand, my mind was already made up. I quickly paid for my Tahini Beet Wrap and tacked on one of the Coconut Oatmeal Cookie Sandwiches for dessert.

While I waited for the staff to assemble my meal, I joined my friend at one of the tables. She had already received her Coconut BLT and Sweet Green Smoothie. One close look at the menu and it’s easy to see that it’s strictly plant-based; they’ve committed themselves to using organic and local ingredients to create items free of meat, dairy, egg and soy products.

My girlfriend enjoyed her smoothie of spinach, parsley, pineapple, apple, banana, dates and almond milk. I didn’t try it, so the most I can say is that the mix of ingredients sounded well-balanced in terms of greens to fruits. Additionally, her Coconut BLT was stacked high with smoked coconut bacon, spinach, tomato, avocado, date jam, mayo and hemp seed pesto (she had the red onions omitted). Although I didn’t have any of it either, there seemed to be an overall lack of “bacon.” Still, I’d be willing to give it a shot next time I’m there.

I’m sort of on the fence about my Tahini Beet Wrap. It’s built with a flax wrap base, which is filled with mixed greens, quinoa, beets, carrots, apples, cranberries, pumpkin seeds, hemp seeds and tahini-lemon dressing. All of the components are things I like and everything was fresh. Yet, a large portion of it came across as kind of bland. It was also somewhat difficult to eat as the quinoa tumbled out with every bite I took. The best part of the wrap was towards the bottom of each half. That’s where I found most of the dried cranberries and the tahini-lemon dressing. When those two elements were present, the wrap shone. On a side note, the greens (there’s also the option of chips) that came with the wrap were stellar. It’s a simple kale salad with a zesty dressing and it was really delicious. 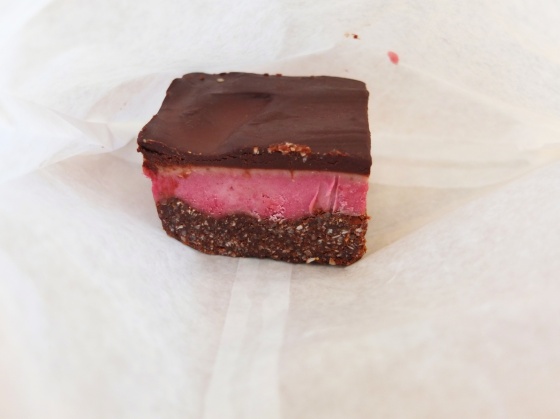 The Strawberry Nanaimo Bar all bagged to go.

Before we left, my friend picked up a small Strawberry Nanaimo Bar to go. She texted me later to tell me it was yummy, but rich. Back at the office, I snacked on my Coconut Oatmeal Cookie Sandwich throughout the afternoon. The texture was lighter than I expected and not as dense as some oatmeal cookies can be. Albeit, it was slightly crumbly. The vegan cream cheese middle was to die for though. I don’t know how they emulated the flavour of cream cheese frosting without real cream cheese. Whatever they did, it worked.

Honestly, I was expecting KB & Co to be better. I had heard so many good things. My biggest issue is the price. The two items I purchased came to about $19. My friend paid about $27 for her trio. I think that for a place that doesn’t provide much added service, the cost does appear to be a tad high.

Nonetheless, I won’t be deterred by that alone. KB & Co is a promising business. It’s catering to a specific clientele whose needs aren’t always met at other restaurants. Even though I’m lucky enough to be able to eat what I want, I appreciate that there’s an alternative out there to help even out the scales when required.