Over the years, I had been to Red Star Pub a handful of times. It was always to chat over drinks with friends as we extended our night just a little bit longer. Never had I ever tried the food. This fall, that would change.

Located on the lower level of a building on 105 Street and Jasper Avenue, the only sign of the space’s existence is a bright red star that lights up like a beacon in the dark. The interior has the styling of an old Irish bar with dim lighting and dark wood everything. But, it’s also extremely cozy and feels like a respite from our months of desolate winter or the perfect place to huddle up on a rainy day.

Jerk Chicken from Caribbean night, which is sadly no longer.

My first attempt at trying their menu was thwarted when I showed up on the first Wednesday of the month in September. As it turns out, until very recently, that was Caribbean night (they’ve ended after a decade), and the only three items served during that event was jerk chicken, or the chicken/veggie roti wraps. We opted to stay that time, and the jerk chicken was a pleasant surprise, but I wasn’t satisfied that I didn’t get to eat their actual food.

A week later, I was back with another friend in tow. Seeing as how we showed up between 4pm to 7pm, we took advantage of their happy hour by selecting Pork Crostinis ($3 each) and mix and match Mini Burgers ($5 each). 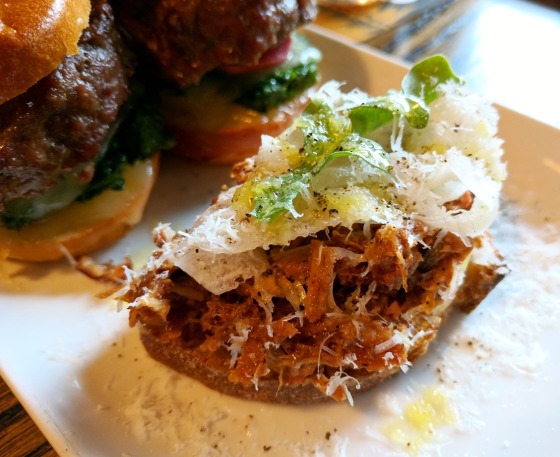 Sometimes I’m apprehensive to order sliders and crostini when the individual price still seems rather steep. However, rest assured. You are getting your value at Red Star Pub. The size of the crostinis and the burgers are generous. The Pork Crostini was probably the same diameter as my palm, and it was piled high with braised Pembina pork, shaved fennel and Pecorino cheese. These were succulent and flavourful with a hefty toasted bread as the base.

We tried both of the mini burgers listed on the menu. Their original option is made with ground tenderloin tip, bacon apple relish and Applewood cheddar. There was a ton of chopped bacon stacked under the beef patty and a beautiful smoky flavour from the cheese. The other burger was a newer addition to their lineup, consisting of jalapeno chimichurri, aged cheddar and pickled radish. This one was still tasty, but the jalapeno chimichurri took a little getting used to. I didn’t necessarily mind the heat. It was more the amount of herbs used and the earthiness of the sauce that didn’t quite mesh with my palate at first. At the very least, the meat was superb. The burgers were formed to be thick and oh so juicy.

My friend continued her meal with a their recently created Chicken Sandwich, which I did not sample myself. It looked and sounded delicious though. A combination of confit chicken thigh, arugula, and caper aioli between house-made focaccia, it was a hearty sandwich for sure.

I finished off my meal with a dish of Red Star Pub’s Beef Carpaccio ($15). Really thinly sliced raw Spring Creek beef was carefully laid out on the plate until it covered every millimeter. It was then topped with arugula, Granny Smith apple salad, lemon, Parmigiano, pepper, and olive oil. Served on the side was a sliced loaf of dense yet soft bread. The beef was so tender as to almost melt in my mouth, and the balance of fresh meat with the tart flavours of lemon and apple was fantastic. 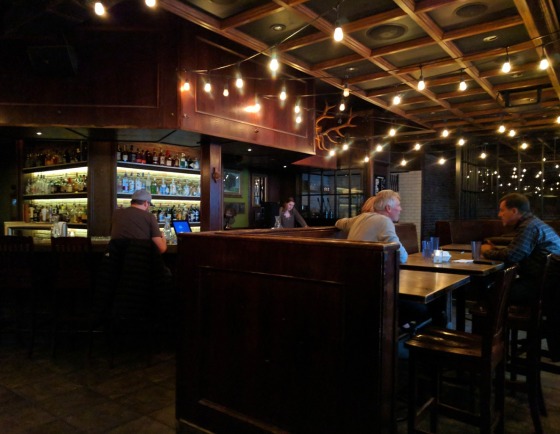 The dark yet cozy interior of Red Star Pub.

Considering how much food we ate, the approximately $30 cost per person after tax and tip wasn’t bad. Although, what I really like about Red Star Pub is how comfortable it is despite being in a dark basement with little natural light. The service is great, too. The staff are always friendly and helpful, and now I can say the food is worth a visit as well.