The open bar and stage at The Needle Vinyl Tavern.

Since The Needle Vinyl Tavern opened about a year and a half ago, I’ve frequented the place a few times. It’s located right on Jasper Avenue and 105 Street. When the business was first announced, it was a welcome addition to the city as it wasn’t simply another bar, but a small live music venue as well. On the cusp of the loss of several others like it in the span of a year or two, Edmontonians were happy to know there was something coming in to fill that void. 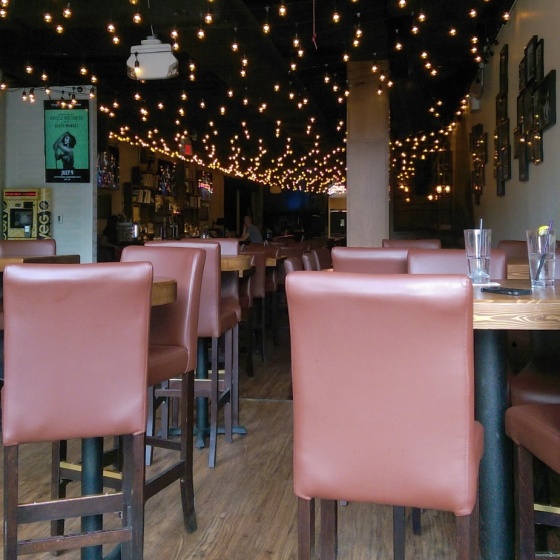 The wall opens up to allow for an expanded patio space.

Although I haven’t gone to any of the shows (they do have some great artists coming through), I have been for food and drinks. The first time was last summer when my friends and I decided to walk a few blocks from the office for our lunch break. It was a beautifully sunny day and we managed to snag a table out on the extended sidewalk patio, one of the few spaces like it in the downtown core. Personally, I think it’s a great spot to catch some rays and grab a bite. The only thing is I prefer sitting a little further in from where the pedestrians are constantly passing by.

The original vinyl drink menu is no longer used, but was a great touch.

On that occasion, I was really impressed with the details that went into The Needle. The overall menu had a decent mix of options and the dishes were promising. What we ate tasted good and the service was prompt. I especially loved that, to go with the theme, they had their list of drinks printed on actual vinyl discs. It was a fun feature. However, over time, those intricacies have disappeared and been replaced with what I would say are watered down versions of their previous offerings.

The last time I visited, my friend and I popped in for lunch. Instead of sitting out on the patio, we ate at a booth inside. While I enjoyed getting to view the bar and the stage, I found the service to be extremely slow even though there were a lot of staff on hand (chatting to each other) and not many people dining in.

Eventually, a server came over to take our order. I opted to make a meal of two of the appetizers: Mac N’ Cheese Bites ($9) and Cauliflower 78 ($13). My friend chose the Taco Supremo House Pizza ($17). 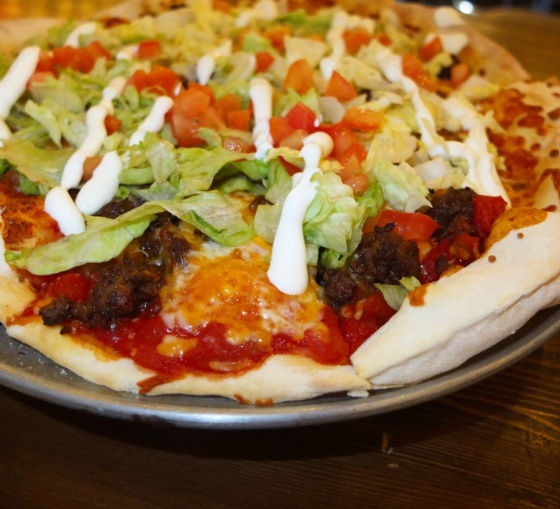 I have to say that the slice of taco pizza was the best thing out of the trio. Yet, I don’t think that’s saying much. Sure, the flavours were okay, but I felt that the crust was bland and lacked in texture. I also disliked the fact that it was difficult to see past all of the lettuce and tomato that topped the pizza. It was like the kitchen was trying to hide what was underneath. The red sauce was basic and there was not enough beef. 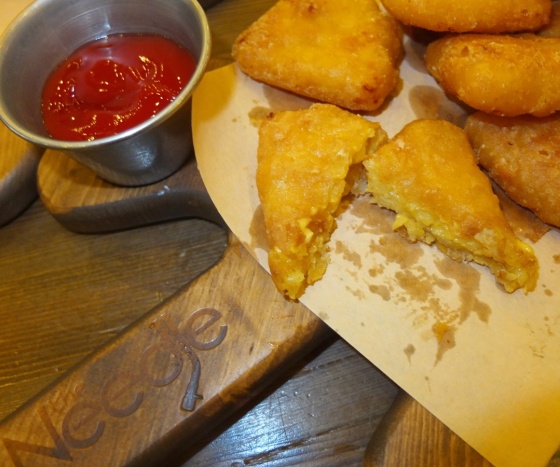 Still, the pizza was better than both of my starters. The Mac N’ Cheese Bites were passable. The thing is, it seemed as though they literally took a box of Kraft Dinner and made the pasta into nugget shapes before breading and frying them. The ten greasy pieces were served with a side of ketchup for dipping. They may have added some extra cheese as the interior of the bites were creamier than I expected. Regardless, the execution was poor. If you’re going to serve something like this, take a page from the many other restaurants that serve similar items. Jazz it up with a ketchup that’s made in-house or incorporate some spice or seasoning.

The worst of the bunch was definitely the Cauliflower 78. These tiny florets were over-breaded (somehow not that crispy) and the portion was way too small for the price. They came in a bowl the size of a cup of soup. The side of sweet chili dip was probably store bought as well. This was absolutely nothing special and such a disappointment.

My takeaway from the whole experience is that The Needle Vinyl Tavern is mainly there for the music and maybe the drinks (my co-worker said the selection of beer is lacking). I’ve been told the brunch menu is a winner, but I have yet to try it. In the meantime, I believe that food is no longer their forte. They have the potential to make it a strong suit because I saw it in the beginning. I just think that they’ve veered off of that path for the time being. Hopefully they can get back on track eventually.

The bar is a cool feature of the venue and it’s pretty spacious to fit a standing crowd during shows.