Living in Edmonton, I rarely venture outside of the city for a meal. Yet, earlier this year, I came across a Groupon deal for Ruamit Thai Restaurant in Sherwood Park. From the far southwest side of the Anthony Henday to the eatery, it’s about a twenty minute drive. Sure, that seems like quite the distance, but in reality, it’s not much longer than going to the west end for dinner.

I took the plunge and I bought a voucher. As per usual, I let the certificate sit there until the full value was near expiry. However, within the final week to use it, my boyfriend and I ventured to Ruamit on a Tuesday night.

Reservations weren’t required with the Groupon, so we didn’t bother booking in advance. We simply hoped for the best. When we arrived, there were a few tables occupied, but the majority of seats were still empty (it did fill up with a couple of large parties as we dined though). 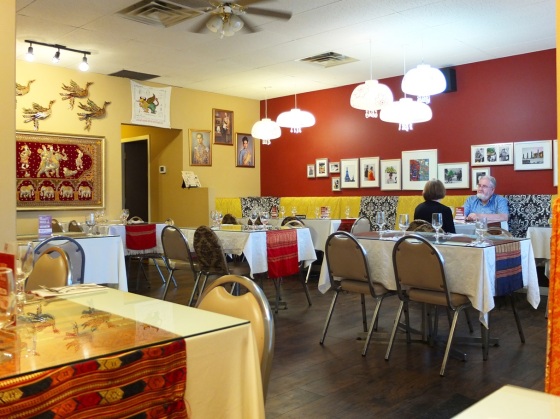 The interior of Ruamit Thai Restaurant.

Our cozy booth was tucked in the corner to the left of the entrance. It allowed me a view of the entire space. It’s not big, but the layout provides room for about forty people or so. The décor leans more towards the traditional with nods towards Thai history and culture.

On our visit, Ruamit was in the middle of revamping their menus, so the ones we were given were photocopies of the takeout listings. After several minutes trying to decide on what we wanted to share, we landed on the Panang Kai Curry ($16.95), the Pad Thai Krung Tep ($15.95) and a bowl of coconut rice ($3.75).

I will quickly note that when they brought out our main dishes, I got the sense that the staff believed that was all we had ordered. I had to remind them that we had also requested the coconut rice. Once I let them know it was missing, they were very prompt to bring that over. 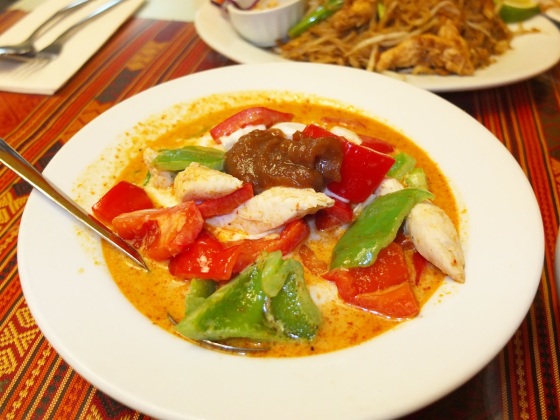 When it came to the food, everything was delicious. The white rice infused with coconut was aromatic and flavourful and it paired very well with the Panang Kai, a curry with a coconut milk base. Still, I was a little bit disappointed with the fact that there wasn’t a whole lot of protein or bell peppers. At this price, I would have expected a heftier portion of meat and veggies, especially when there are no other sides included. By the same token, they didn’t skimp on the creamy coconut curry or peanut sauce as there was an ample amount of both. The problem is that, although the sauces were amazing, they’re not necessarily filling. 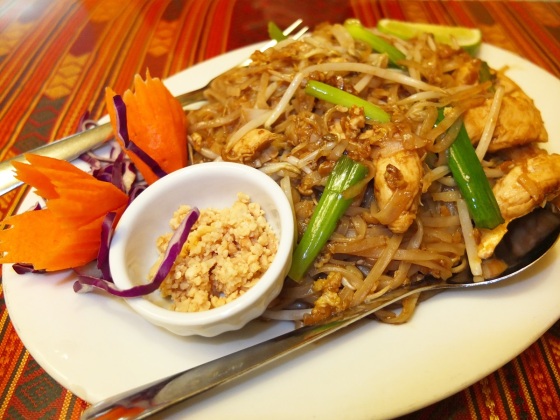 On the other hand, the Pad Thai Krung Tep seemed to have a better ratio of stir-fried chicken to egg to rice noodle. Even though I would have been happy with more protein, it was a decent mix and it didn’t feel like this dish was wanting for anything. The sauce soaked into the noodles and there was plenty of chopped green onion, bean sprouts and crushed peanuts. I added a spritz of lime juice to give the dish some zestiness and it was wonderful.

Despite our stomachs being satiated by the time we finished off those plates, I had to ask about Ruamit’s dessert options. To my dismay, the only one offered consisted of fried bananas, so my hope of finding mango sticky rice was dashed. If sticky rice and mango was available, I would have put aside my feelings of fullness and continued eating.

All-in-all, Ruamit did the trick of filling my cravings for Thai food. Plus, the service was quick and friendly. While I’m unlikely to go out of my way to visit on a whim, I will definitely keep this place top-of-mind for whenever I find myself in the Sherwood Park area again.