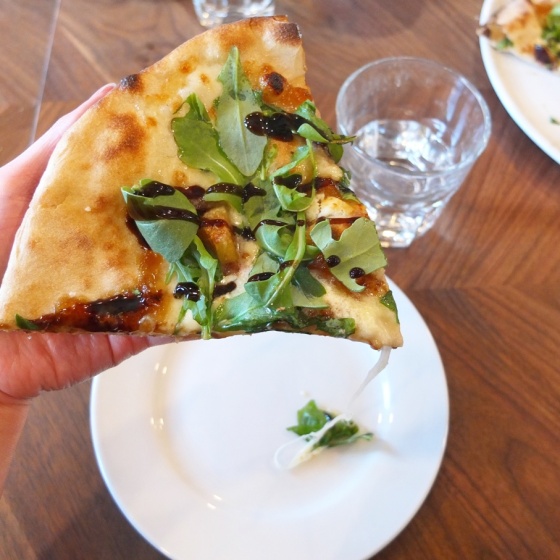 A slice of the St. Francis Montanara pizza.

Whenever I’m making plans for an outing with friends, one of the first places I check for restaurant possibilities is the OpenTable app. I love that the ability to make a reservation is just a few clicks away. Sometimes it’ll even bring up a total gem.

During a recent search, I happened upon an eatery called Vaticano Cucina. New to Edmonton’s south side, it took over the space vacated by Koutouki Taverna on Gateway Boulevard and 45 Avenue.

As it turns out, the business opened their doors at the beginning of May. Only in operation for a few weeks before we visited, I had kept it in the back of my mind until I was planning an escape room event. Just four minutes away by car from the game venue, Vaticano Cucina was the perfect spot for our get together. 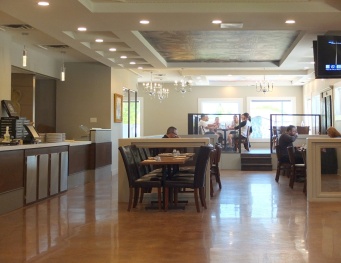 The expansive interior of Vaticano Cucina. 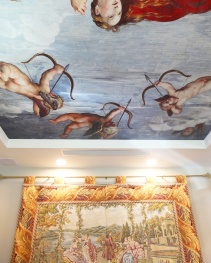 Part of one of the fresco ceilings and a decorative tapestry.

On a sunny Sunday afternoon, we headed over to the restaurant where we found a couple of our friends circling the building. A lack of signage and multiple doors threw them off, so they were looking for the main entrance (it’s the one facing the Travelodge). Once inside, we were greeted and led to our table. It was situated on a raised platform to the side, but it didn’t feel enclosed at all. It actually provided great vantage points of the kitchen and the expansive interior while allowing us to talk without any distractions. We also noted the fresco-like ceilings. Inspired by the Sistine Chapel, Vaticano Cucina had large scale canvas prints of classic Italian paintings made and wallpapered to raised portions of the ceiling throughout. This was a neat detail in an otherwise neutral, but stylish room. 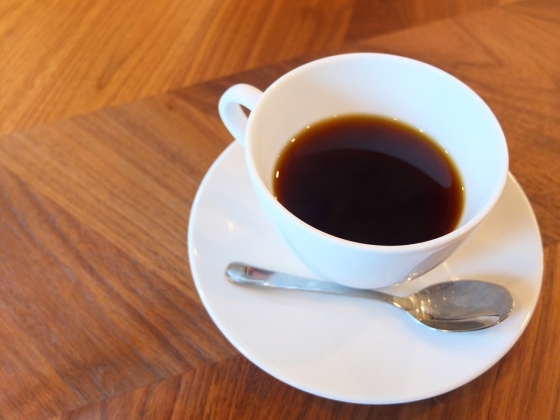 A cup of coffee.

The atmosphere lends itself well to the idea of brunch, and I think it’s important to note that only those items are served until 2pm during the weekend. Afterwards, the regular menu takes effect. I was unaware of that before we arrived, so I wasn’t expecting to find a pared down list. Nevertheless, there was no problem finding something I wanted to eat.

In the end, two people opted for the Chicken Parmesan Panini with Chips, one selected the Italian Prosciutto & Sun-Dried Tomato Pesto (or Cubano Pork Traditional; I may have them confused) Eggs Benedict and the last of us chose the Strozzapretti Funghi. 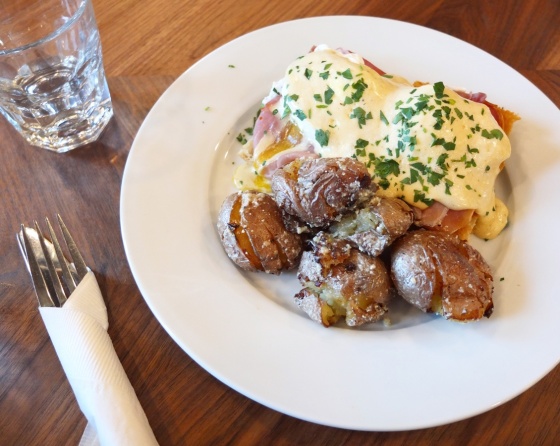 Off the bat, I’ll make it known that I didn’t try any of the Eggs Benedict ($15), but it looked wonderful and hearty. Focaccia bread was laid with large slices of Cubano pork, two soft poached eggs and covered in a brown butter Hollandaise sauce. Their version of hash browns was served on the side and was different than anticipated as they were prepared more like smashed potatoes. My friend reluctantly shared a bit with his wife before devouring the whole thing himself. 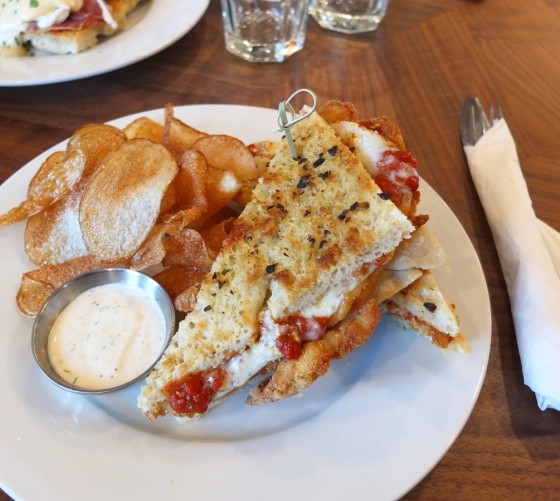 I did get to try some of the Chicken Parmesan Panini since my boyfriend generously cut off a corner of his sandwich for me. It was better than I imagined it would be, too. The chicken was breaded and fried until succulent on the inside and crunchy on the outside. It was then placed between the slices of bread with the perfect amount of tomato sauce and melted cheese. In addition, the bread was incredibly buttered and sprinkled with herbs before being grilled. It was simple, but also rich and indulgent. The side of chips was prepared in-house and came with a refreshingly creamy dill dip. 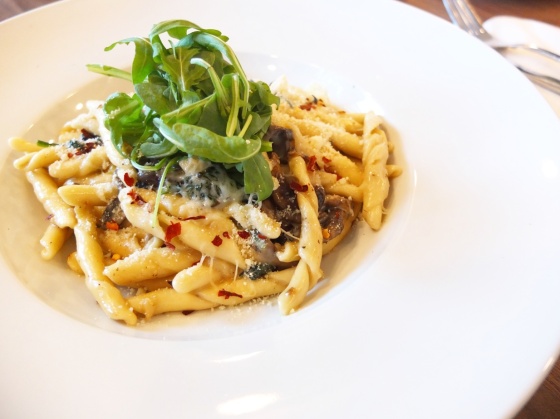 My dish was the Strozzapretti Funghi. I’ll quickly note that their pasta is handmade, but it’s not freshly created at the restaurant. The dry pasta is actually imported from Italy. Taking that into consideration, it’s still very good. The noodles were cooked until perfectly al dente and stirred with cream sauce, spinach, Fontina cheese and a trio of mushrooms. The dish was garnished with some arugula to round out the flavour profile. I also sprinkled on some grated Parmesan cheese and chili flakes. Surprisingly, the dish refrained from being too dense. I polished it off without any issues and still had room for a snack.

Joe, who co-owns Vaticano Cucina with his brother and both of their wives, chatted with us while we dined. He happily shared some of his family’s Italian history with us while also taking the time to describe what a Montanara pizza is – flash deep-fried dough that is then baked in their wood burning oven – before fully convincing us to try one. 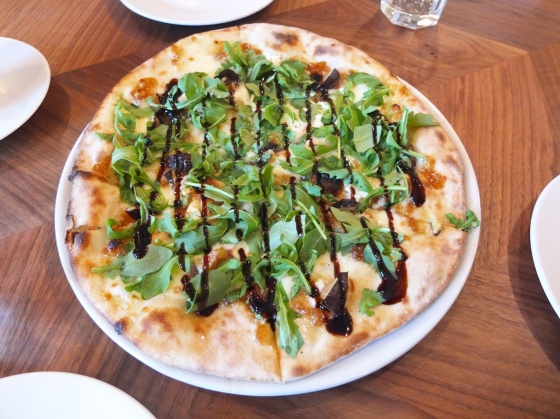 We figured that it wouldn’t be a problem for five people to eat a whole pizza and we were correct. The most difficult part was deciding which one to order. There are over a dozen choices, and each one is creatively named after various saints. Ultimately, we went with the first one Joe suggested, St. Francis. Quite honestly, I couldn’t really decipher a change from the regular Neapolitan pizza preparation as the consistency of the baked and charred dough was so similar. But, I’ve heard that the main difference actually comes down to the taste, which is deeper in flavour with the Montanara. Regardless, the crust had just the right amount of chew and crispness. The toppings of fig, chevre (goat cheese), arugula, onion jam and balsamic glaze made for a light yet punchy pizza.

Thanks to the wonderful food, relaxed venue and friendly hospitality, we left Vaticano Cucina in a great mood and we felt more than ready to take on the day. We also unanimously agreed that each of us would be happy to go back. For such a newcomer to the Edmonton restaurant scene (especially in the south of the city), they’ve already proven themselves to be worthy of a second helping.