Tuna Burger with Tater Tots and the Blue Bison Burger in the background.

I regularly find myself scrolling through Instagram. As I work my way down the feed, I like and save posts that I want to remember. One such image showcased the featured ‘Worship the Burger’ menu that Brewsters offered until the end of September. Until then, I’d never dined at one of their restaurants nor had I planned to any time soon. Alas, photos of the Tuna Burger couldn’t be ignored. I made it a point of dragging my boyfriend to the Summerside location before it was too late.

The merchandise case had some fun branded products.

Walking into the doors, we were greeted by a wall of Brewsters merchandise and signage that indicated we could seat ourselves wherever we liked. We opted to sit in the lounge. There, we perched at a bar table by the windows that overlooked the patio. It’s pretty standard looking in terms of typical pub-like chains; roomy enough to get around the tables while still maintaining a variety of seating options to accommodate different sizes of groups. The bar is a good length with a few TVs in view as well.

Once we had settled in, our server came over to let us know of any specials before going to grab us some glasses of water. When she came back, we were ready to order. My boyfriend chose to go with the Blue Bison Burger ($17.99) and I stuck with my decision to try the Tuna Burger ($17.99). 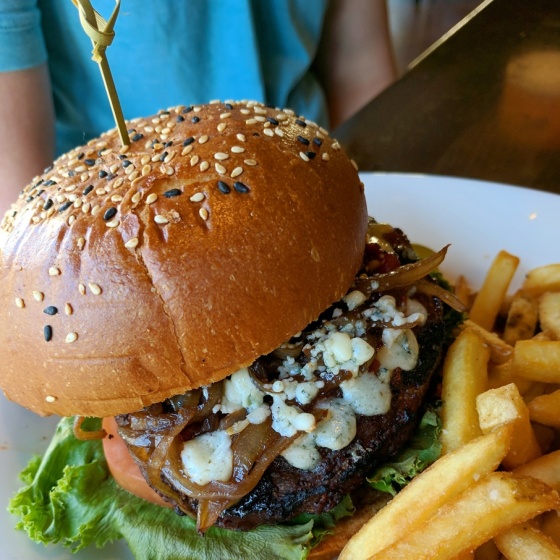 As expected on a quiet afternoon, the wait for our food wasn’t too long. Although, the Blue Bison Burger showed up on a scalding hot plate, which was a sign that it had likely been sitting under a heat lamp to be kept warm. Still, the side of fries had a crispy exterior that gave way to a fluffy middle. They were quite delicious. The burger, on the other hand, was disappointingly made with a prefab bison patty. The free-range meat was packed too tightly to be considered remotely fresh. Despite that, it wasn’t completely dry after the cooking process. All too often, lean bison can lose it’s juiciness easily. This was surprisingly more succulent than I expected. Topped with smoked Gorgonzola, chipotle ketchup, mayo, caramelized onions, lettuce, tomato, and dill pickle, I thought it was quite flavourful. Smoky with some funk from the cheese, it was a decent balance of what could otherwise be strong or overwhelming profiles; however, my boyfriend would have preferred more of the Gorgonzola.

I’ve had my share of Ahi tuna burgers over the years. Many of them have been amazing, so it would take a lot to impress me here. Admittedly, the first thing that crossed my mind when I looked at Brewsters’ Tuna Burger was that it was too high to fit in my mouth. The slab of seared tuna was thick to begin with. Stacking it with four large wonton chips and a mound of green pea shoots made it even taller. For fear of having the roof of my mouth butchered by the corners of those crisps, I elected to remove them before I proceeded to eat. To be honest, the initial bites were a bit of a let down. The tuna seemed to be overcooked. My boyfriend sampled it and said it tasted like he was eating a salad in a bun as there were so many greens. Yet, as I kept at it, the rest of the sesame seed crusted Ahi tuna steak was found to be more than adequate; the fish was nicely seared on the edges as it remained raw in the middle. The flavours also improved, especially when I made sure to take mouthfuls of the tuna alongside the wasabi tartar sauce layered wonton crisps. Minimal amounts of the pickled green pea shoots helped, too. The chips were actually quite thin, so they were easy to break and less likely to scrape the insides of my mouth than I originally thought. In hind sight, it may have been fine to leave the wontons in my burger, but better safe than sorry. Overall, this was again a good balance. It veered towards being a healthier option than the other burgers on the ‘Worship’ menu. Well, healthy insofar as the tuna, lettuce, and shoots. Not so much when it came to the side of Cajun spiced tater tots drizzled in a hot sauce and sprinkled with green onion. As full as I was, I managed to polish the skillet of tater tots clean.

I kind of want this polka dot hat.

When it came down to it, I’d say that our experience was mixed. The Blue Bison Burger left something to be desired even though my meal turned out to be great. The service we received was friendly, if a tad slow when we wanted to pay our bill at the end. Brewsters certainly isn’t at the top of my list of places to revisit soon, but I’m not completely deterred either. Now that we know that their burgers aren’t hand-pressed using fresh ground meat, we can avoid those menu items and try something else next time. Live and learn, right?