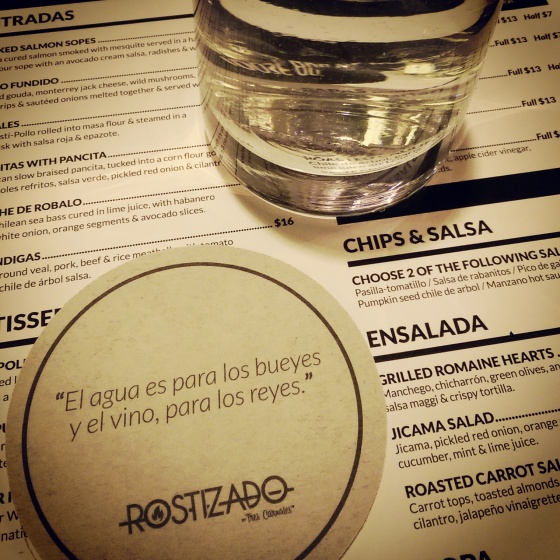 “Water for oxen, wine for kings.”

The backs of the coasters are printed with the Spanish proverb, “El agua es para los bueyes y el vino, para los reyes.” Roughly translated to English, it means, “Water for oxen, wine for kings.” While my friends and I did not drink any wine on our evening out, we did feast like royalty at Rostizado by Tres Carnales.

Originally, we had a group of eight that planned to get together, so I had attempted to book a table in advance. However, I was told that they had taken the maximum number of reservations for the evening (they only accept them for groups of 8 or more, 48 hours in advance). Being that all my friends were going to be off work by 5pm that Wednesday, we decided to chance it and do a walk-in. One friend arrived early and put the group down on the waiting list as a table for 6 (a couple of people could no longer make it). We were told that it would likely be ready by 5:15, so we sat on the benches outside the restaurant as there isn’t much room to linger inside. Just shortly after the indicated time, my friend received a text message letting us know that we could come in if our whole party was there. Thankfully, our last two members were within sight as they ambled down the block. 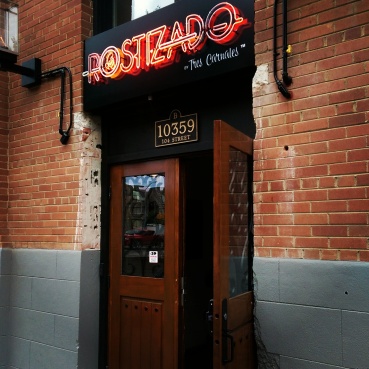 The entrance to the restaurant. 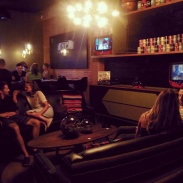 When we walked into the restaurant, I noticed that the Mexican style living room was to my left with the open kitchen directly ahead, seating behind and to the right with a private room (or two) at the far end. Retaining the rustic sensibilities of its predecessor, Roast Coffeehouse & Wine Bar, it’s a decent sized, 70-seat space that allows them to rearrange tables as needed. Mostly though, it has a homey feeling to it. You’re meant to sit back and relax. We were placed at a table against the wall that gave half of us a full view of the chef working away. Warmth was emanating from the rotisserie that was slow cooking chicken and pork, requiring that I acclimate during our meal (I eventually did).

Our server, Monika, was great; she brought us still filtered water (no charge) as soon as we sat down, provided us with drink recommendations (FYI…the pitchers of sangria that can be ordered at Tres Carnales, Rostizado’s sister restaurant, are not on offer here) and she indicated whether or not we had ordered enough food for the group. The menu isn’t large by any means, but everything other than the cemitas (sandwiches) are meant to be shared family style. We basically decided to go big or go home, so we ended up ordering the smoked salmon sopes, the albondigas, and queso fundido to start. The salteados verde and the jicama salad accompanied our two platters for two. 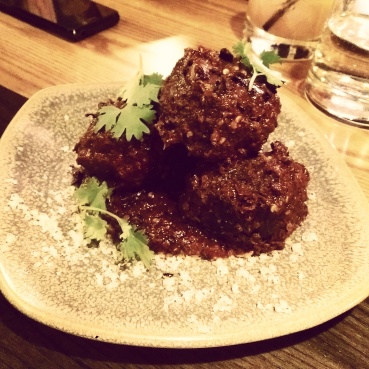 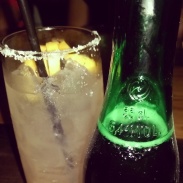 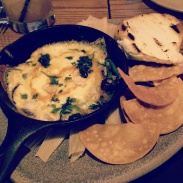 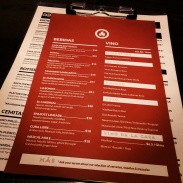 The smoked salmon sopes was the first appetizer to come. A plate of three hand-made corn flour sopes – they look like thick tortilla shells, but they’re fried until the outside is cooked and they are still soft on the inside – topped with an avocado cream salsa, tequila cured smoked salmon, mesquite, radishes and white onion, it was easy to split between the six of us. Personally, I wish there had been just a bit more salmon on it to cover every bite. Yet, this was my favourite of the three entradas we ate. The mix of textures from the sope, fish, salsa and raw vegetables, plus the range of flavours in the few mouthfuls that I had was enough to make me want more.

Albondigas are Mexican meatballs made of house ground veal, pork, beef and rice served with tomato and warm chile de árbol salsa, which gives the dish a heat that slowly builds and lingers. I’m a fan of spice and I could handle it, but a couple of my companions thought it was a bit too much for them. Regardless, I think you get four large meatballs that are juicy and really hold the essence of the salsa well. The last starter was the queso fundido, a skillet of melted smoked gouda and monterrey jack cheeses mixed with wild mushrooms, poblano chile strips and sautéed onions served with a side of bread and tortilla chips. This was really tasty. The cheese stayed hot and stringy because of the iron skillet. Unfortunately, it was also smaller than I would have liked, but definitely worth a try.

We opted for two salads, so we’d get some sort of green during our meal. The salteados verde is listed as sautéed seasonal greens cooked with garlic, apple cider vinegar, poblano strips and pumpkin seeds. Seasonal greens on this evening turned out to be kale, which was excellent. The kale really soaked up the vinegar, taking on a tanginess that was offset by the nuttiness of the seeds. Jicama salad, for me, was a nice alternative to the rest of the dishes, which were largely savoury. The salad was a mix of jicama (reminds me of apple), pickled red onion, orange segments, cucumber, mint and lime juice, which I considered to be a refreshing palate cleanser before beginning on our main platters.

The combination platter for two! We ordered two of these.

Two huge wooden boards emblazoned with the Rostizado logo had to be fit onto our table. Each was covered with a combination of local Four Whistle Farm chicken (half) and pork roasted in-house (Chris, one of the owners, came by to say hello, and he said they’re experimenting with other meats on the rotisserie, including duck, which they know is my favourite!), garnished with peppers and carrots and served with rosti-papas (potatos) and tortillas. Let me just say, wow! While we all preferred the pork over the chicken, it’s not to say that the chicken wasn’t any good. The bird was perfect; it was slow roasted on the rotisserie so that the meat practically dissolved in your mouth. The difference is that the pork was incredibly juicy and the rub used to marinate the meat was so flavourful that it didn’t require anything else. A bit of pork inside a tortilla shell was all that I needed. The rosti-papas were delicious as well, and they were nice to have as a starch when we ran out of the tortilla wraps that came with the platters. As we were warned by Monika, we did have plenty of meat left over. She packed the rest up in two boxes for us. I happily took one home and it became my lunch the next day.

That meat was saved for leftovers on purpose, of course. Why you ask? Well, because we had to save a bit of room for dessert. They only offer two desserts on the menu: flan de queso and churros con dulce de leche. We made sure to sample both, so we ordered two of each to share. I had seen posts of the churros on Rostizado’s Twitter feed (@Rostizado_yeg) and seen them make them on the morning news, so I definitely wanted to eat some. While they were delectable, especially made fresh and drizzled with dulce de leche sauce, it was the flan that won me over in the end. It looked like traditional flan, but it had cream cheese folded into it, so it was a lot more dense than I expected and incredibly smooth, and it was drenched with a thin caramel sauce and tossed with almond slices. It was spectacular.

We were there for about two and a half hours and felt welcome the entire time. The service and the food was stellar. Between Tres Carnales (@TresCarnales) and Rostizado, I’d say that Chris Sills, Dani Braun and Edgar Gutierrez are doing things right when it comes to the Edmonton restaurant scene. They focus on and perfect core dishes to ensure that no one walks away hungry, but, most of all, they give their full attention to everything – the atmosphere, the service and the patrons – so you feel as if you’re experiencing something special and memorable every time you dine with them. 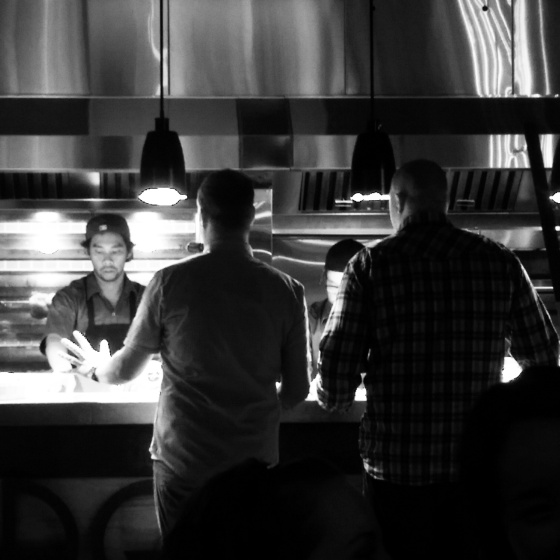 The Tres Carnales – Chris and Dani watching over Edgar who’s busy in the kitchen.

Open for exactly four weeks as of today, the restaurant has been getting raves and seems to be quite busy already. However, I know that there are still some who haven’t learned of its existence yet. Although, that won’t last for long! I fully expect that it will become a quick favourite for foodies and casual diners all across the city, and, no doubt, it will make The Tomato‘s list of best eats and drinks in Edmonton come 2015.

For a more in-depth look at this establishment’s involvement in the local community and its efforts towards sustainability visit The Local Good to read my profile of Rostizado.