Pizza places are abound in Edmonton nowadays. Add to the growing list Rosso Pizzeria (@RossoYeg), which opened in the Garneau area a little over a year ago. Taking over the old Da Capo location along 109 Street, you’ll spot it to your right as you exit on the south side of the Highlevel Bridge. Seeing as how my visits to the University/Whyte Avenue area are sporadic at best, I had no idea that it was there. It was only after I happened upon a deal from Travelzoo that I learned of its whereabouts, and then I came across their standing as the No. 70 best place to eat and drink in Edmonton as voted by readers of The Tomato in 2014.

The voucher I had purchased was valid for two people, including your choice of an appetizer or salad to share and two small pizzas. Since it could only be used on a Monday to Friday during their lunch hours of 11am to 3pm, I took the opportunity to visit with my mother during my staycation in June. The restaurant being slightly out of the way, I wasn’t realistically able to get there during a usual work day, so this panned out well for me.

High tables to the right of the entrance.

Seeming like a quiet Wednesday, we were the first table to arrive. There were three servers on hand, one of which indicated that we could seat ourselves wherever we wanted. Personally, I like how the space is broken up. To the right of the entrance is a raised nook that gives you a view of the kitchen including the giant red bell oven. The large bar in the center takes up a huge portion of the square footage, but as you walk in it showcases all of the boutique beers as well as the baked goods, desserts and gelato that they have to offer, and the one side provides additional bar seating. The other half of the restaurant consisted mostly of regular height tables that can be rearranged for different group configurations and a tall raised bar, too. For those sunny, warm days and nights, you also have the option of sitting out on the patio at the front (watching a large truck backing out of a parking spot in the lot next to the patio, coming just inches from the barrier, made me think twice about that though).

We tucked ourselves into a booth as the server brought over menus and explained how our voucher worked. The menu is fairly extensive with several starters, salads, pizza rossas (red) and pizza biancas (white) to pick from, so it took us a while to make a decision. As we eyed the options before us, we sipped on filtered water from their Q Water system (they don’t charge extra for that here, it’s just par for the course). Ultimately, we ordered the Piatto di Formaggi Misto for our first course and the Rucola E Bresaola and the Pesto E Pollo pies for our mains. Truthfully, it didn’t matter if the dishes came together or not because we alternated between the three plates throughout our lunch.

The assorted cheese board.

The Piatto di Formaggi Misto is the Italian fancy name for an assorted cheese board, something that I have an increasing fondness for as of late. This arrived on a wooden board decked out with what I’m pretty sure were four semi-firm or firm varieties. The differences in texture and taste between each of the cheeses was subtle, but I could distinguish between them. I probably would have preferred if they had changed it up and included a goat cheese or a brie for a greater mixture. However, I was still very happy with this appetizer that came with slices of crostini, a combination of dried fruit (cranberries, apricots and figs), housemade marmalade and a pot of honey. As a side note, I will say that you certainly get your money’s worth with this dish as the portions given are generous.

Moving onto the pizzas, the Pesto E Pollo is a white pizza that uses almond pesto as the base and is then topped with roasted tomatoes, buffalo mozzarella and marinated local organic chicken. The crust was crisp on the outside with the soft, chewy texture that is to be expected of traditional Neapolitan pizza. The flavours were a little more subtle than I expected, so it came across as a lighter selection. The Rucola E Bresaola, another pizza bianca, was packed with layers to savour. A combination of beef bresaola, organic baby arugula, mozzarella fior di latte, parmigiano scallions and amorosa tomatoes, I think that the saltiness of the extremely tender, thinly sliced cured beef (dare I say better than what I ate at The Cavern) with the sweetness of the tomatoes and the bitterness of the arugula was such an excellent blend. 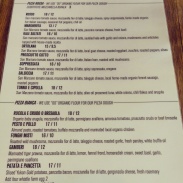 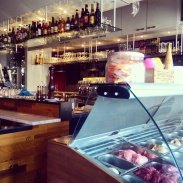 The bar and the gelato case.

My medium pistachio gelato with my leftover pizza all boxed up. 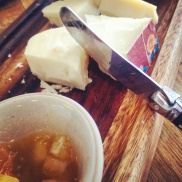 A close up of the cheese board. 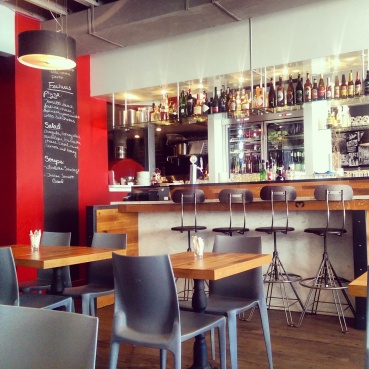 The other half of the restaurant.

Way too full to even think about dessert that afternoon, I did go back to try some in-house made pistachio gelato on another visit just shortly after. The gelato was wonderfully creamy and the medium size that I opted for was perfect to satisfy my sweet tooth.

Personally, I really like the unique touches such as the table tops that were made out of recycled wood from old wine casks. The food was great, the service friendly (maybe a little slow at times, but much better the second time around) and the atmosphere laid back. Perfect for gatherings with family and/or friends, they’re now on my list of go to local restaurants. If you plan to go, they are open daily, and it’s well worth a try. I almost guarantee you’ll want to go back again!

For a more in-depth look at the establishment’s involvement in the community and its efforts towards sustainability visit The Local Good to read my profile of Rosso Pizzeria.