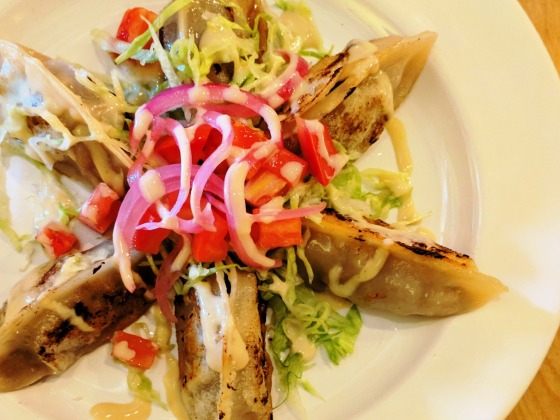 Placing in the top four of MasterChef Canada competitors (her season aired in the spring of 2017), chef Mai Nguyen returned to Edmonton with talent to spare. I’m going to call her the Dumpling Queen since she has parlayed her knowledge of cooking into making these delectable pocketed treats.

I’ve kept my eye on her social media, and I have drooled at photos of all the food that she has posted. I also lamented missing out on previous pop-ups that she has run. Every time one occurred, I happened to have previous plans that prevented me from attending. But, a week and a half ago, she hosted another one at Prairie Noodle Shop. You best believe that I booked a reservation as soon as I found out.

The full menu for the Gourmai Dumpling Pop-Up on Oct 28.

Kirk and I arrived at the restaurant at noon (the earlier the better as the dumplings only last until sold out), and proceeded to order almost the entire wallet-friendly menu: Donair ($9 for 6 pieces), Bacon Cheeseburger ($11 for 6 pieces), Peaches & Shrimp ($11 for 5 pieces), Satay Chicken ($10 for 6 pieces), Oyster Soup Dumpling ($4 for a single), Roasted Kabocha Squash ($7 for 4 pieces), and Marinated Quail Eggs ($4 for 4 eggs). We also received a House Salad ($5) at no charge due to a delay with one of our items. Each dish was presented as they were prepared, so everything was served fresh and hot. 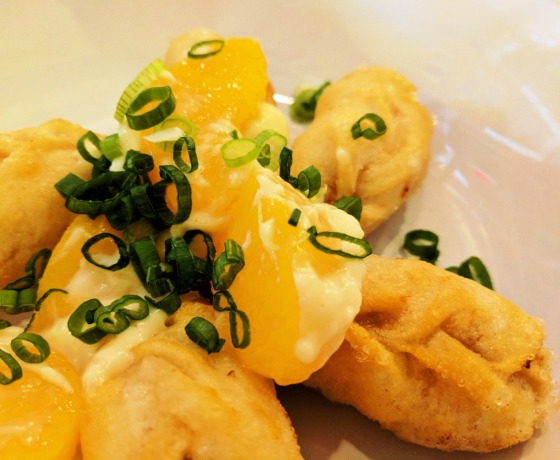 The first to come out was the Peaches & Shrimp. Kirk would have preferred that the shrimp was minced and mixed with other filling. But, I was okay with the shrimp being whole. The outside of the dumpling showcased a beautiful braided edge. The wrap was slightly crisp and a little bit sweet from the mayo. It’s a classic combo of flavours, taking influence from the famous Chinese favourite.

Next up was the Donair, which seemed to be filled with minced lamb. The meat was slightly drier, probably from the leaner cut. Still, these were very tasty when combined with the donair sauce, pickled onions and tomatoes. Having additional donair sauce for dipping would have taken these just a step further.

As we dined, I snacked on the Marinated Quail Eggs. These were delicate and delicious. Extremely well-flavoured with a smooth texture and not too hard. They were paired with pickled radishes that added crunch. 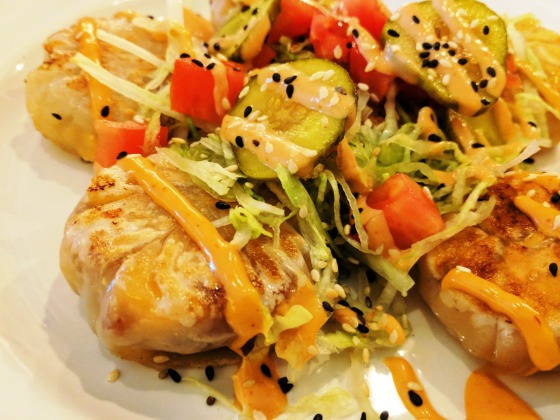 Returning to the dumplings, we continued on our lunchtime journey with the Bacon Cheeseburger. These were fabulous. I kind of questioned them at first, mostly for the regular pickles listed in the ingredients. Thankfully, the pickles were just used as a topping to the dish and could be removed easily. The meat was incredibly juicy, and the fats that oozed out with every initial bite reminded me of eating a xiao long bao (soup dumpling). These ended up being my top choice of the day!

Because Kirk isn’t keen on eating bivalve molluscs like oysters or mussels, I couldn’t convince him to give the Oyster Soup Dumpling a try. These were perfectly folded with black wraps coloured using squid ink. Admittedly, the high salinity content of the oyster can be hard for many to swallow. But, overall, I think that these showed a lot of craft, and if tweaked slightly, they could be winners.

Part way through our meal, we realized it was likely that our last plate of dumplings was forgotten, so we quickly mentioned it to one of the servers. While we waited, they provided a complimentary House Salad. A rainbow mix of sliced raw radishes, carrot slivers and greens were tossed in a fragrant ginger soy sesame dressing. The acidity was such a nice cleanser on the palate before lunch ended.

It wasn’t long before we received our Satay Chicken dumplings. These were massive! The minced chicken had been combined with ginger for a simple touch of spice. The seared dumplings were served with pickled veggies (chili peppers and cucumber) and a thick peanut satay sauce. Compared to the rest of the options at the pop-up, Kirk and I both thought that these were a tad bland on their own. However, when eaten with the dip and veggies, they were superb. 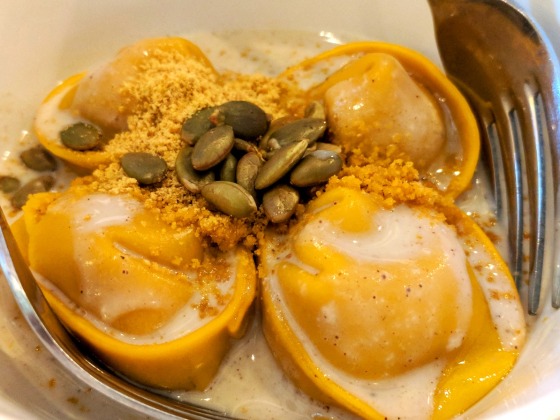 The Gourmai Pop-Up was completed with a helping of the Roasted Kabocha Squash, Mai’s take on dessert dumplings. These were decadent while retaining a lightness in the whipped mascarpone cheese and squash filling. Sitting in a generous pool of spiced crème anglaise (I drank all of it) and decorated with graham cracker crumb and pumpkin seed, it was the perfect fall-inspired finish to our outing.

Mai definitely outdid herself by making each and every dumpling by hand for the event. I can’t even fathom the amount of time it took for her to prepare all of them. The love certainly showed though, and I look forward to her next endeavour(s). If you want the chance to attend her next Gourmai Dumpling Pop-Up, follow her on Instagram (@maicaroon). You’ll want to be there!