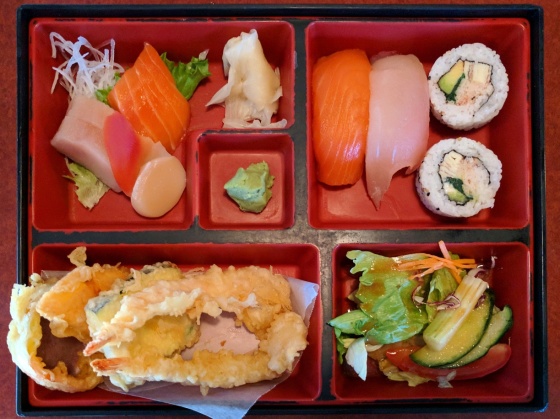 This is a sort of a late review. Yet, I think it’s one worth writing. Approximately two months ago, my boyfriend and I decided to make use of an OpenTable dining cheque that I had redeemed using my earned points from the restaurant reservation site. I had $65 in my possession that I was told could be used at any OpenTable eatery. Therefore, I went ahead and made a booking through the app for dinner at MISO Japanese Cuisine. In the reservation notes, I even made sure to mention that I planned to use the cheque as part of payment.

When we arrived at MISO (located at 14917 Stony Plain Road), the staff had our table ready to go. We went about ordering our food, which we enjoyed. However, at the end of the meal, I pulled out my OpenTable cheque to cover the bill and when our server saw it she said she knew we had one, but they would not be able to accept it due to issues they had depositing another received from a previous diner.

I have to say that I was very unimpressed with the fact that she didn’t bother to mention that to us earlier in the evening. Had she taken the time to explain the situation to us, we would have gladly stayed to eat there. I just know that I would have been more sensible with the amount of food I ordered. Instead, we ended up having to pay an almost $90 bill fully out of our pockets, something we hadn’t expected to happen. The cheque was a perk that we were using to treat ourselves to a nice supper, and we ended up walking out with much lighter wallets. I feel as if the restaurant didn’t want to lose out on a big order, so that’s why they didn’t say anything to us when they knew we had that $65 cheque on hand. It was such a disappointing way to leave MISO.

That story aside, I will say that the service during our dinner was decent. Although, I could have used less staring from the server while I was eating because each time I looked out of the corner of my eye, I’d see her watching me like a hawk. It was awkward. Otherwise, the food was quickly prepared and drinks were provided and filled. 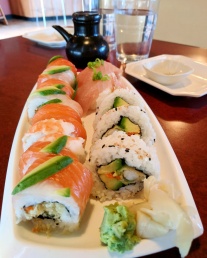 Dynamite Roll is on the right. 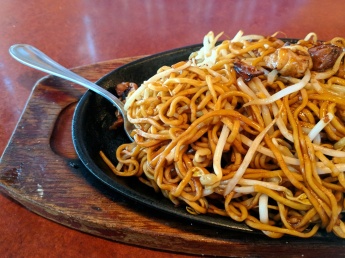 My boyfriend had the Dynamite Roll (4 pieces for $6.45) and the Beef Yaki Soba ($13.95). The Dynamite Roll was quite good. Tightly packed with tempura shrimp, avocado, and tobiko wrapped in nori and rice with sesame seeds. They held up well when picked up with the chopsticks and the fried shrimp was still warm. The Chicken Yaki Soba was so-so. Buckwheat noodles, flavoured with something like an oyster sauce, had a nice consistency. The main issue was the lack of meat in the dish. Its only saving grace was that it showed up on a sizzling plate that, at the very least, kept the plate hot for longer.

That night, I went all out by ordering a Bento Box ($21.95), Toro Sushi (2 pieces for $4.95), the Rainbow Roll (8 pieces for $9.45) and the Spider Roll (8 pieces for $13.95). I knew it was way too much food to consume in one sitting. I just figured that I could take any leftovers home with me. Everything was presented at about the same time, so I switched between items as I ate.

Mixed tempura in the Bento Box.

A generous helping of sashimi in the box. 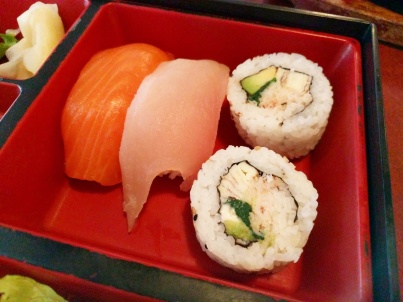 A few pieces of sushi also in the Bento Box.

The Bento Box included my choice of any three items from a given list. I opted for the sushi, sashimi and tempura. The box also comes with a bowl of miso soup, green salad and some rice. The sushi was an assortment of tuna, salmon, Hotate (sea scallop) and Hokki-gai (surf clam). I’m not a big fan of the latter as I don’t like the texture of surf clam, but the others tasted fresh and tender. The sushi was a mix of salmon, tuna and a couple of pieces of the California Roll. The tempura had a bit more batter than I’d prefer. It wasn’t overly greasy though, so they were okay. For the price, there’s a lot of bang for the buck with a Bento Box, and I’d say it’s fairly equivalent to what it would cost at any other average sushi joint in the city. 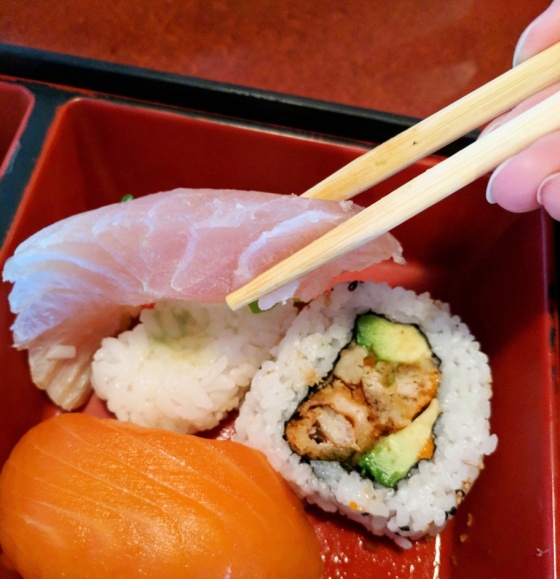 That’s a piece of the thick cut Toro Sashimi off it’s pedestal of rice.

Honestly, I thought the Toro Sushi (fatty tuna) would have been better. The portion size of each piece was wonderful as the fish was thick cut. My qualm was with the quality. It was tougher than it should have been. Even a regular piece of tuna melted in my mouth more than the belly I was given.

I thought I’d leave the rolls to discuss last. What can I say? The Rainbow Roll — crunchy tempura crumbs and tobiko in the middle with a mix of fish on top — is a classic at most sushi restaurants nowadays. These mouthfuls had the best rice to filling/topping ratio of all the sushi I tried at MISO. It was exactly what I was hoping for even though it didn’t exceed my expectations. 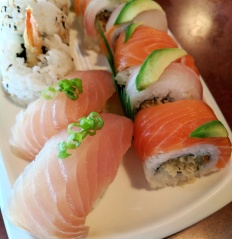 Rainbow Rolls on the right hand side. 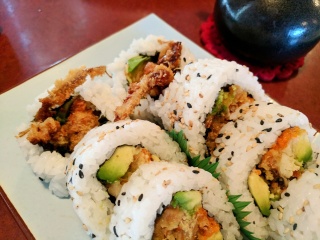 My favourite out of everything I ordered had to be the Spider Roll. These were huge. Filled with large pieces of perfectly fried soft-shell crab, avocado, and tobiko, they absolutely hit the mark with this dish. The crab was crisp, juicy, and flavourful. Despite the fact that it doesn’t truly fill the gap of the soft-shell crab I tried in Singapore a couple of years ago, it’ll still do the trick when I want some variation of that type of crustacean.

For the most part, MISO Japanese Cuisine was alright. I still believe that they should have handled the whole dining cheque fiasco more professionally, but now I know not to bother trying to pay with something like that if I ever go there again. Regardless, they do sushi well, their prices are reasonably affordable, and the space is pretty comfortable for a quiet meal out. I probably won’t be back any time soon; however, I’ll certainly consider the possibility of returning down the road.