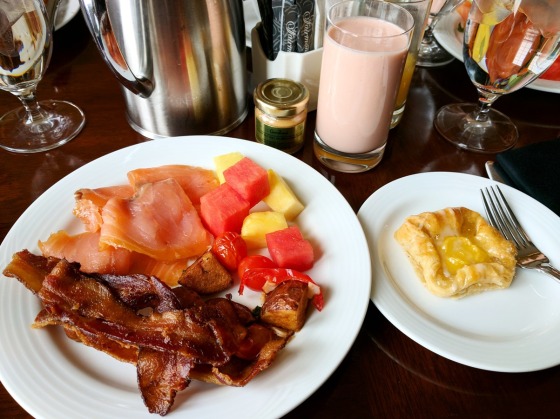 My first run at the Full Buffet.

I’ve been to The Harvest Room at the Fairmont Hotel Macdonald several times over the past few years, but the last time I wrote about it was just over four years ago. A recent visit, prompted by the purchase of a Groupon, is giving me the chance to talk about this downtown Edmonton spot once more. This time, instead of coming in during lunch or stopping by for dinner, my family and I opted to meet up for breakfast bright and early on a Sunday morning.

Street parking on Sundays is free, so it’s possible to find spaces nearby without having to pay for the use of a lot or for the Fairmont’s valet services. The rest of the week, it will cost to park until at least 6:00pm. We had made reservations for 9:30am, and we arrived right on time. Before we were led into the dining room, the host hung up our coats in the closet, and he also requested our Groupon voucher. In this instance, the deal was a $100 value for $65 to be used on a Sunday to Thursday towards breakfast or dinner. However, I also managed to get an additional 25 per cent off with a promo code, which dropped the price down to $48.75. The original offer is still currently available.

Our table of four was seated next to one of the big windows, allowing us a great view of the entire restaurant and the patio. The space isn’t all that big and it’s not as regal as I’d assume a Fairmont dining room would be. It is classically styled though, and the servers are all dressed more formally. There’s even a window into the kitchen, so you can watch the staff as they work. It starts to feel like a fancier place when it’s apparent that they will bring brand new cutlery every time you begin eating off of a new plate. 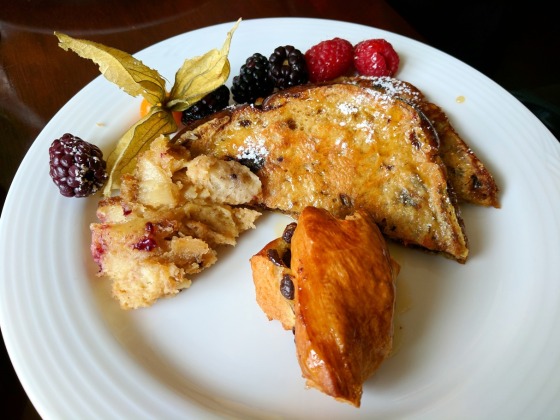 The breakfast menu ranges from $12 for a Super Green Smoothie to $26 for a House-Cured Hot Smoked Salmon Benedict. It’s certainly not cheap. Especially when any additional drinks, including coffee, tea, and juice, are $5 each. Although, they do offer the value option of a coffee or tea with juice for $8. Taking all of that into account, it just made sense for our group to go with their Full Buffet option ($31.50 each). For about the same price as a single dish with a drink, we’d get unlimited fresh fruit, smoked salmon, domestic cheeses, yogurts, assorted cereals, bagels, toast, pastries, eggs benedict, french toast, bread pudding, crispy bacon, sausage, scrambled eggs, omelettes, breakfast potatoes, and the daily smoothie. Plus, coffee or tea, and juice — I questioned whether or not the orange juice was actually fresh as indicated on the menu — comes with it as well. 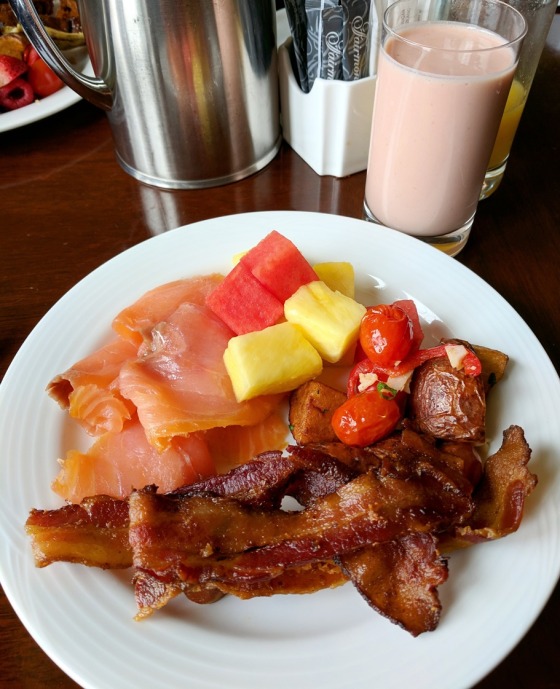 From the Continental Buffet, the best item you’ll find for the value is the smoked salmon.

Personally, I wasn’t super impressed with the Continental Buffet ($21.50) selection as I found the bagels to be kind of hard like they weren’t made fresh and there wasn’t much in the way of cheeses. The fruits were alright. I particularly enjoyed the pineapple and watermelon. Both were juicy and sweet. I also will commend the pastry chef because the mini danishes that I ate were delicately flaky and soft. Otherwise, it’s only worth the money if you’re a fan of smoked salmon and yogurt-based smoothies. Eat as much of the house-cured fish as you can and drink a couple of glasses of the daily smoothie to completely justify the cost. But, really, for an extra $10, it seems like a no-brainer to just go with the Full Buffet. While I didn’t try the eggs benedict or the scrambled eggs (I’m not a fan of eggs that have been sitting for periods of time), I made an effort to sample everything else. 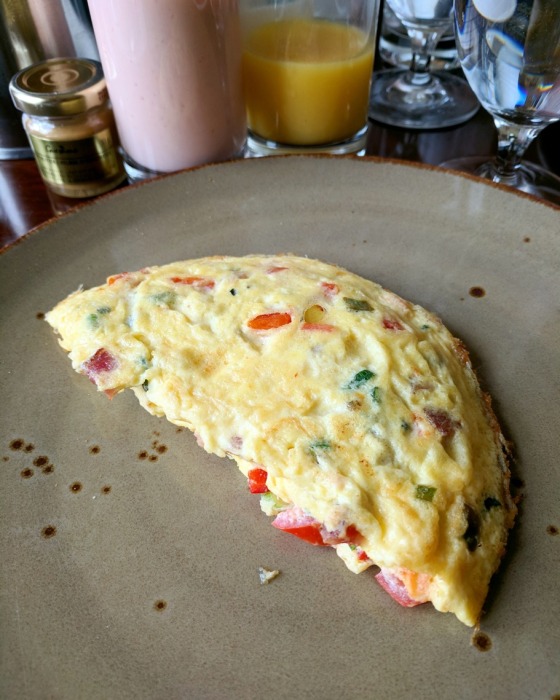 Prairie Omelette made fresh to order.

First off, I’ll say that I appreciate the fact that, even though it is a buffet, they’ll take omelette orders at the table, so the dish is freshly cooked and comes hot from the kitchen. I chose the Prairie Omelette, which is usually $23 on its own, served with potatoes and tomatoes. Filled with boar bacon lardons, charred peppers, tomatoes, green onion, smoked apple wood, and smoked cheddar cheese, it was okay. I definitely could have used more cheese, and I would have preferred a fluffier egg.

The bread pudding at the 12 o’clock position was so good, as were the mini danish pastries.

Again, items that sit out at the buffet in warmers are never going to be the best unless there’s high turnover. That’s why I wasn’t too keen on the french toast. The slices seemed kind of stale and the berries that were tossed into the pan looked as though they’d been heated a bit too long. On the other hand, the bread pudding was fantastic. When I lined up to get some of that, I was at first disappointed to see that the tray was missing. But, that turned to happiness when I saw that a new bowl of bread pudding was being brought out just as I reached the buffet. The sweet bread was subtly flavoured with cinnamon and a dusting of icing sugar. I paired it with a few strawberries I pulled from the tray. It’s simple, but tasty.

The breakfast potatoes were savoury and tossed with roasted tomatoes. They were the perfect accompaniment to the plump sausages and the copious amounts of crisp bacon strips that I had. Those were all perfectly prepared.

My pot of tea was included in the price of the Full Buffet.

All in, my family paid about $100 after tax and tip out of pocket. At $25 per person, the value was there. However, when it comes down to the regular price, this is more than I would typically spend on breakfast (I’ll take the $8 happy hour special at Earls over this any day). Yet, if it’s not too out of the way, you’ve got a big appetite, and you’re looking to treat yourself to something nice, the Full Buffet at The Harvest Room should be a contender. Go for the drinks, fish and meats, and fill out the rest of your meal with other sides such as the delicious pastries. Just keep in mind that the value lies in certain items and stick with those.