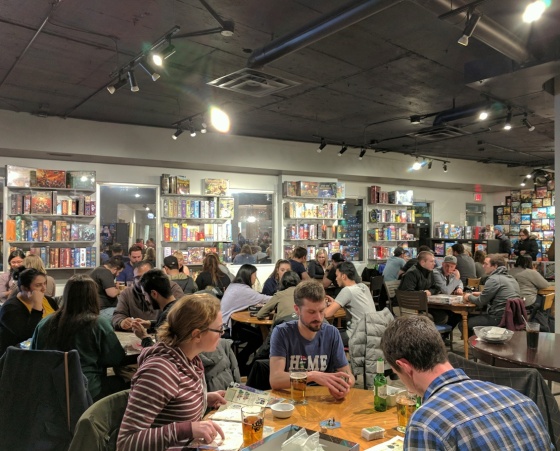 Table Top Cafe 2.0 filled will customers on a Saturday evening.

Back in 2013, Table Top Cafe opened their initial board game cafe location at 57 Avenue and 75 Street. With its popularity, the owner expanded less than two and a half years later with second spot on 102 Avenue and 124 Street. The two are differentiated by the addition of a “1.0” or “2.0” to the end of its name.

I never did take the time to check out the original. However, I’ve been to the one that sits between the Oliver and Westmount neighbourhoods twice within the past eighteen months. My fiancé and I visited in the fall of 2016 because of a Groupon I had purchased. The deal covered both of our entrance fees and included about $15 to use towards food and drinks. On that occasion, we chose to grab a couple of the wraps (all are just under $10 each). I can’t say that the food was all that impressive and I wouldn’t make a point of going there to eat. Yet, they do serve some great beverages and beer.

Another couple met us that afternoon and we stayed for a few hours playing games until we were ready for dinner. What’s so awesome is that this form of diversion is so affordable. If one isn’t inclined to order snacks or drinks, the cost to play all day comes to only $5 per person. Several shelves house hundreds of available games that are sorted based on type and difficulty. 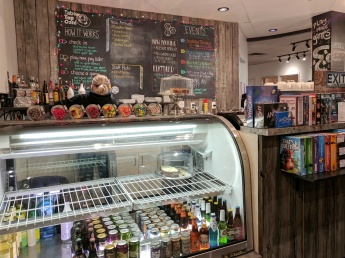 The snack and beverage counter. 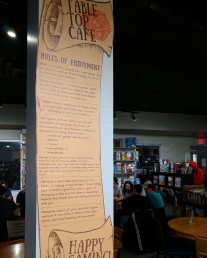 The Rules of Enjoyment are posted in the cafe. 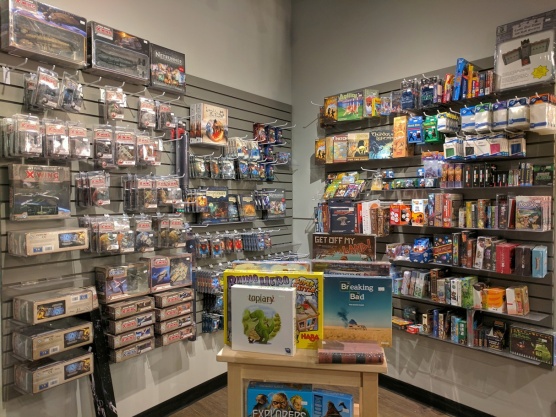 One of the corners of the space filled to the brim with games for purchase.

The business has made it really easy to get started, especially for those that aren’t too familiar with all of the choices out there. I mean, board games have moved well beyond the classics that I grew up with like Scrabble, Monopoly, or Life to include more risque ones such as Cards Against Humanity, strategic ones like Quantum, or puzzles such as Sagrada. There are so many to explore and likely not everyone can afford to buy them all, so spots like Table Top Cafe provide fantastic opportunities to test them out first. Staff are also more than willing to take the time to explain rules whenever anyone gets stuck. Should patrons find something they love, there’s a good chance that there’s an unopened copy in stock to purchase before leaving. Plus, sign up for a membership and a percentage of every game bought can be accumulated and used towards a future buy.

My most recent visit was at the end of January. After supper at The Manor Bistro, we made our way over to Table Top Cafe 2.0 to continue our double date. It was a busy Saturday night, and, luckily, we managed to snag the very last table out of maybe 17 to 20 in the space. When we arrived, we had to check in at the counter to start up our tabs. While we were standing there we placed our orders for drinks (hot beverages, cold refreshments and alcoholic choices are on the menu) and snacks (Magic Maize, a big bowl of popcorn, was $4). 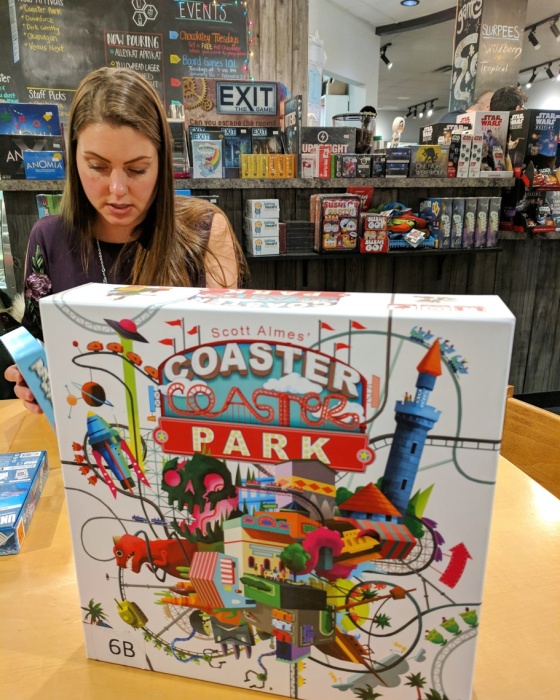 Coaster Park was put back when we realized it was a bit more difficult to get started than we expected.

Then, we got busy looking for some games to try out. The guys started out with a round of chess, so my friend and I kept perusing the shelves. In the end, the two of us decided to bring a few games to the table: Unlock! The Nautilus’ Traps, Pass the Pandas, and Coaster Park. Ultimately, we set aside Coaster Park. Although the box stated that the playing time is between 30 to 60 minutes, when we opened the box, we realized it was more complicated than we expected. Everything else we worked our way through that night fell into the easier category and were essentially card based. They were all quick to learn and none took more than an hour or so from start to finish. 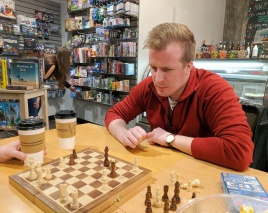 My fiancé contemplating his next chess move. 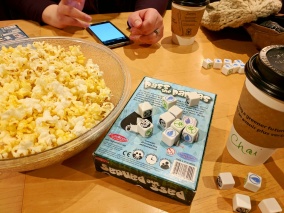 Getting ready to play Pass the Pandas.

While the men were completing their chess game, us ladies learned Pass the Pandas. It’s a simple, speedy dice game with about four rules. The first to rid of their dice wins. 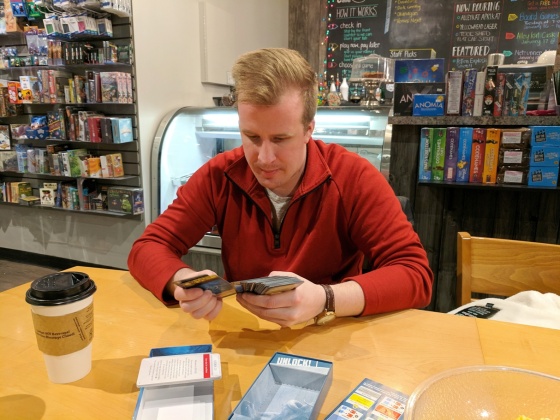 Unpacking the Unlock! box to play a card escape game.

Our toughest challenge was definitely the Unlock! game. It’s basically an escape room in card format. All four of us had tackled other games in the Unlock! series before. But, we had yet to play together, so we thought we could do that here. Even though the game is rated at a difficulty level of two out of three locks, it was tough and we didn’t technically survive by making it out of the “room” in the allotted hour. I’d chalk up our failure to it being too loud in the cafe to hear some of the recordings we needed to listen to within the accompanying app. 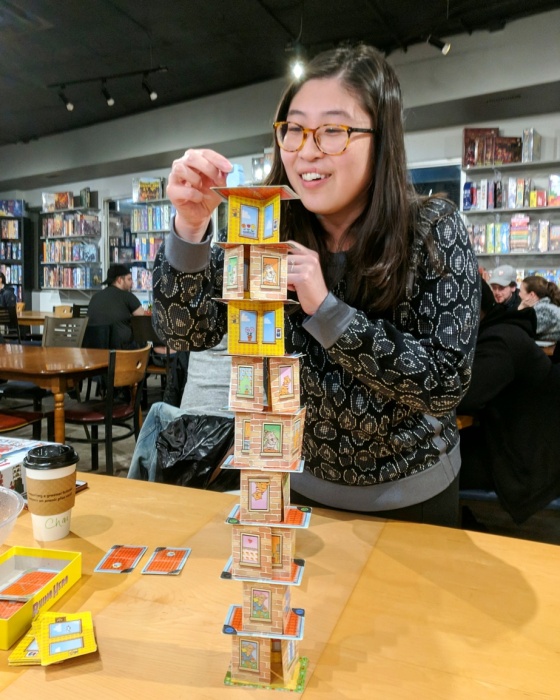 Rhino Hero was so fun! I couldn’t stop laughing as I was attempting to balance the Rhino on that stack of cards.

Once we had muddled our way through that game, we moved on to Rhino Hero. Admittedly, we kind of mixed up the rules a bit, putting each of us at a disadvantage at some point. It’s in the vein of Jenga and the object is to stack the houses higher and higher without knocking the tower over. The downside was that all the roof cards had been folded (we’re guessing this was a mistake by a previous group), which increased the difficulty slightly. No matter though. This was still super fun with a straightforward concept. My girlfriend thought it’d be a perfect game for her kids, so she bought a copy to take home with her. 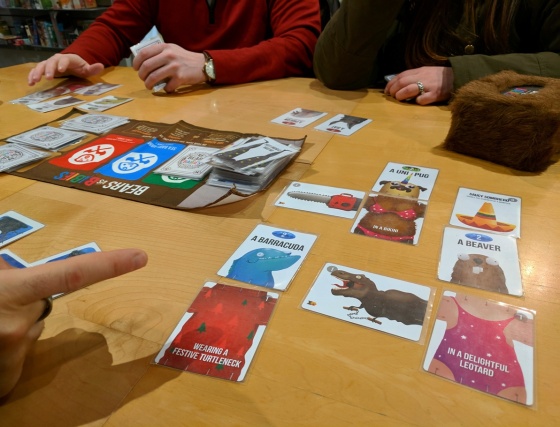 Check out my monsters towards the end of our game of Bears vs. Babies!

Finally, before we had to head out for the evening, we played a full game of Bears vs. Babies. I’m bad at following rules and directions, so I’m sure I can do better next time, but the gist of the game is to build super strong monsters that can fight off baby armies which periodically attack when someone at the table provokes them. This was designed by the creators of Exploding Kittens, so you can expect things to get a little weird. The whole group enjoyed this one and often chuckled when we saw the combinations we were coming up with for our monsters.

All in, we were there for about four hours and I’d say each person spent, on average, approximately $10. Not too shabby for a full night of entertainment. I have no comparison to any of the other local board game cafes (I would like to stop by all of them down the road). Yet, my experiences specifically at Table Top Cafe have been wonderful. I’d highly recommend that Edmonton residents who want to get into the board game resurgence, or who are already board game enthusiasts, support this local gem.