A chef lighting up the teppan grill.

At the start of the year, I found myself scrolling through the list of participating OpenTable restaurants in the Edmonton area. I was attempting to remind myself of places I’d had yet to visit, which I would then be able to recommend to my friend as suggestions for our upcoming lunch or dinner meeting.

As I perused the directory, one popped up that I hadn’t heard of. SEORAK Teppan & Bar was unfamiliar to me. I Googled the name and it seemed to have opened on Whyte Avenue just a few months prior.

Fast forward a couple of weeks later to when my boyfriend and I were heading to Nongbu for dinner with our friends. We happened to drive east down 82 Avenue and I spotted the exterior of SEORAK on 108 Street. Its simple signage is unassuming. Paired with the fact that there aren’t many happening restaurants past about 106 Street, SEORAK could be easily overlooked. Yet, maybe the lack of much else on that block is what made it stand out to me that night.

Towards the end of January or beginning of February, it was decided that we would make some sort of plans for Valentine’s; however, we wouldn’t be partaking on the actual day. It was going to be low key. My only stipulation was that I wanted to go somewhere new because it would allow me to blog about it. So, I complied about a handful of restaurants.  I sent them to my boyfriend to check out all of the menus and asked him to pick. Ultimately, we landed on SEORAK.

When this particular Saturday finally rolled around, our day started off with brunch at home and then a few hours of painting ceramics at Crankpots ahead of dinner. We arrived in advance of our reservation and it was still rather early in the evening, meaning it was relatively quiet at that point. Only about four other tables were seated.

One of the servers came up to greet us and he immediately apologized for the wait. He cited that the restaurant was short staffed and then he quickly brought up my name. Once he checked us in, he started to lead us to a table closer to the teppan grill, but, at the last second, he guided us over to a booth nearer the windows.

Now, here’s the thing, I never tell restaurants that I’m a blogger (although, they can probably guess when I pull out my camera and start taking photos). It’s a rarity that I mention anything because I don’t really want to be treated differently than anyone else who walks through the door. However, on this occasion, I pulled the card and asked if it’d be possible to be sat across from the teppan as I hoped to take photos without getting in anyone’s way. The server then introduced himself as the owner, Sa Hwang. He explained that it was going to be busy that evening and his manager had made the arrangements regarding the reservations, so he’d speak to him and see if we could be moved. The manager was over a couple of minutes later and he had us swiftly placed at another table with an optimal view of the show. We thanked him for being so understanding.

The SEORAK logo along with a few of their signature cocktails.

Our server for the evening, Joanna, came by shortly after to introduce herself and to ask us if we’d like any drinks to start. With ten minutes to spare before happy hour was over, we managed to sneak in an order of four cocktails at the lowered prices. Basically, all of their signature drinks are offered for $1.50 to $2 less. I’d say the one that makes the most of the Asian theme would be the Lychee Lollipop as it incorporates both the lychee flavour as well as soju, a Korean liquor. The Aloe-Ha is a typical tropical drink that went down smoothly, and the Kraken Cider was a delicious mix of spiced rum, Asian apple cider, ginger ale and fresh squeezed lemon that was garnished with a stick of cinnamon.

A deconstructed kimchi bomb that was about to be devoured at Seorak.

Having trouble deciding on what to eat, I asked Joanna for recommendations. She indicated that some of the menu items had been updated recently, so she suggested a few that she really likes, including the Kimchi Bombs. As we needed a bit more time to come to a conclusion on our meal, we opted to go with those as our appetizer. The plate appeared at our table not too long after. Three balls of kimchi rice stuffed with mozzarella cheese and deep fried until crisp on the outside were garnished with green onions or leeks and a sweet aioli. I love a good mac and cheese ball, and this is, essentially, its cousin. At first, I wasn’t overly impressed. I mainly got a bite of the rice and no cheese. But, as soon as I had a taste of the rice with the gooey mozzarella and crispy outer shell coated in the sweet aioli (surprisingly not creamy like a mayo) with the tanginess of the onions, I realized that all of the flavours just balanced each other out and the textures definitely worked together. 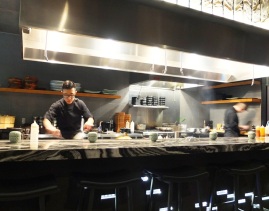 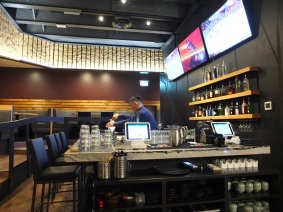 The bar is also a focal point of Seorak.

By the time we had devoured our starter, the mains that we opted to share were being put together in the kitchen. I took in the whole restaurant while we waited. The design is sleek and modern yet also welcoming. The marbled countertops at the grill and the bar are gorgeous. Nearly every table in the house (granted, not all of the seats) have a view of the teppan. The only thing I noticed was off were the bar stools. I didn’t try sitting in them, but they seemed a tad too tall for the height of the bar. Otherwise, down to the outlines of Mount Seorak (located in South Korea) on the wall next to us and the use of diverse textures and neutral colours, it’s a really well thought out space.

By 6:30, all of the tables were occupied, so there was a buzz in the place. Not loud though, so it was perfect for conversing. I was watching the chefs cooking up a storm on the grill and snapping photos. Eventually, the Pork Belly Trio was dropped off at our table with a bowl of rice. Not long after, the Korean Shortrib that I had selected showed up as well. We had been warned that due to the different cooking times for each dish, the arrival of them may be staggered. Since we were planning to share, it didn’t really matter, but I suppose it’s something to take into consideration when dining at SEORAK.

Although the menu at SEORAK integrates both Korean and Japanese (i.e. okonomiyaki) cuisines,  we stuck strictly to the Korean selections in this instance.

A wrap I constructed using everything in the dish.

Getting ready to eat my mini wrap.

For the Pork Belly Trio, my boyfriend picked the Seoul Chili flavour for the meat. That particular option came with sheets of nori, pickled radish and a carrot/purple cabbage slaw in a sesame dressing. I hadn’t expected it to come out plated the way it was. When I absorbed what I saw, it occurred to me that all of the separated portions of the dish could be compiled together to make mini wraps. Personally, I really enjoyed the opportunity to play with my food. Each thing tasted great on its own, but the layers of flavour experienced when everything is combined is stellar. The Korean BBQ pork belly was cooked well and most of the really fatty parts had rendered away. I expected the meat to be spicier, but it was actually very subtle. The nori was fresh and had that snappiness to it that gave way without a struggle when I took a bite.  I always appreciate a good sesame slaw, too. This, paired with the acidity from the pickled radish just added an extra oomph of flavour. The colours were also beautifully vibrant. 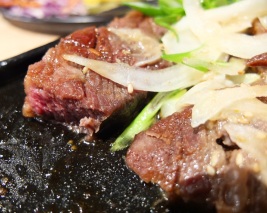 The bottom piece of short rib was thicker and cooked to a medium rare.

I voted for the Korean Shortrib dish and it did not disappoint. Sure, it could have used a little extra garnishing. Perhaps a side of veggies to go with it. Aside from that, the AAA Alberta boneless short ribs were top notch. Yes, the meat is sliced fairly thin, but there were three long slabs of beef placed on the hot skillet, likely amounting to about ten ounces of steak. The bottom piece was about half to three quarters of an inch thick and cooked to medium/medium rare. The meat was succulent with just a slight amount of fat, which helped to ramp up the flavour of the Korean Kalbi (or Galbi) marinade of Asian pear, soy, honey garlic and sesame.  I ate up every last bite of the short ribs and the rice. In the end, I even added in the leftover radish and slaw from the pork belly dish for good measure.

To finish off our celebratory evening, we skipped the snowbowl (a finely shaved ice dessert only available in Edmonton at SEORAK) and went for the Green Tea-rimisu. I’m not going to lie, it took me a second to grasp that it was a matcha flavoured take on the traditional Italian tiramisu. It was presented in a pretty ceramic bowl with a matching lid. I opened it to reveal matcha powder sprinkled on the top in the shape of a clover (maybe a regular leaf would be a better shape and more in line with the idea of a tea leaf, but I digress). This was a well executed dessert. Nevertheless, I’d argue that it lacked the matcha flavour throughout. I did like the use of a Korean cookie as the base of the tiramisu though. I couldn’t quite put my finger on the flavour. I wanted to say it was black sesame or something, but it may have simply been chocolate.

All-in-all, SEORAK was an excellent choice in the Old Scona area. Everything from the food to the service was first-rate. Even on a night when they were short staffed (Sa was at the grill cooking and there were only two servers), the manager and Joanna were really attentive to us as well as the other diners. The dishes and drinks all made it out to customers in a prompt fashion and the integrity of the restaurant never wavered.

With our bellies full, I caught Sa when he had a moment away from the teppan. I praised the fantastic meal and said we’d be back. In fact, I’m already licking my lips in anticipation of our next visit to SEORAK.