Ricotta pasta with a side of salad and housemade chips

In business since 1979, The Dish Bistro (@dishspoonbistro) has amassed many regular customers. However, until a few years ago, I wasn’t one of them. Growing up just blocks away in the Glenora neighbourhood, you would think that my family would have dined there at least once before. The Oliver area is really a skip, hop and jump from their home, yet that was far from the case. It took over twenty-five years before my parents set foot into the establishment and it was only because my fondness for Groupon deals brought us there.

Stepping into the restaurant, it’s unassuming. Large windows brighten up the somewhat dim space, which is broken up into three areas – a room by the bar, a smaller sliver that sits between that and another adjoining span that can likely be rearranged for large parties and is often opened up on busier evenings to expand the total number of seats. The green walls are sporadically adorned by art that kind of reminds me of a grandma’s house. The Dish is homey and has a casual air about it. They also have a patio, which they call the “Secret Garden.” A hidden nook behind the building, the outdoor space must be accessed by passing through a side gate and walking down a small path. I finally had a chance to take advantage of the patio this summer when the weather was still smiling down on us. It’s really cute with hanging flower pots, a bird house, twinkle lights, trees and bright red brick walls. Although, I should note that I overheard one server tell another table of patrons that the space is several degrees cooler than out at the front of the restaurant, so once the temperature cools down come fall, it’s probably not so lovely out there. Make sure to choose a nice, sunny day to dine outside.

The pathway that leads to the patio behind the building. 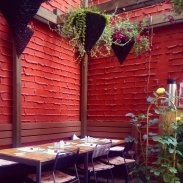 Tables on the patio.

The entrance to the “Secret Garden.”

Having been several times within the past thirty-six months or so, I developed a taste for certain dishes, specifically the Wild Mushroom & Feta Pasta with beef tenderloin added, so I was pretty much set to order the same thing when I went in June. What I wasn’t aware of prior to getting there were the selections on the daily features menu. Upon seeing the several items on the list, it made my decision all the more difficult. The thing is though, once I spotted the Chicken & Waffles I knew that I had to try it for the sake of comparison. Recently having sampled the dish at The Common and Sugarbowl, I needed to see if The Dish’s version could live up to what I had eaten at the other two restaurants. The friendly server working that evening said it was a good choice.

Our water with whimsical paper straws. 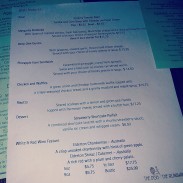 The features menu from June.

While my dining companion and I waited for our food to be made, we sipped on water through whimsical paper straws and chatted. Our plates arrived relatively quickly and were each filled with a large circular green onion and cheddar buttermilk waffle topped with two fat pieces of crispy seasoned chicken breast that were drizzled with a grainy mustard and maple syrup. The chicken was battered and fried well – not greasy with a shell that wasn’t too thick and the meat was relatively juicy. It didn’t taste like it was seasoned much, so the majority of flavour came from the fluffy waffle and the syrup, which could easily have been overly sweet. That was avoided with the addition of the mustard. On that note, I would say that The Dish’s ability to keep the Chicken & Waffles more savory than sugary makes it better than what I had at Sugarbowl, but still not quite as delicious as The Common’s offering that builds bacon into the waffle and refrains from the syrup route by going for tart and spicy profiles, using their blackberry and chili sauce instead. 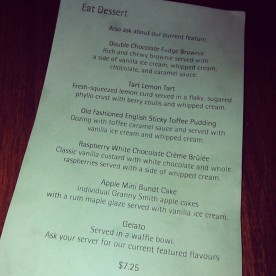 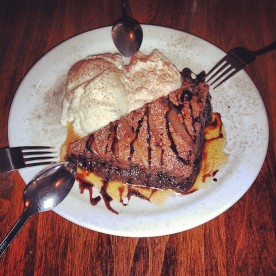 To finish off the evening, we ordered the Double Chocolate Fudge Brownie for dessert. I’d eaten it previously, but I had forgotten just how good it is. You’re given an ample portion (possibly not quite enough for two people as we were fighting for bites) of brownie that has been drenched in chocolate and caramel sauce and comes with a side of vanilla ice cream. The brownie is extremely rich and very moist on the inside, so much so that it almost comes off as being a lava cake. Either way, it was a satisfying end to our meal.

About a month later, my mom joined me there for dinner (that’s when we sat in the “Secret Garden”). She chose the salmon and asparagus quiche with a side of tomato bisque, and I opted for the ricotta pasta dish with a salad of mixed greens and raspberry vinaigrette. Both meals were tasty, but I would say that the quiche would have been better had it come to the table better heated. On the other hand, my layered pasta was piping hot, so my mom kept sneaking some from my plate. We finished off our supper with a tangy lemon tart. More similar in consistency to a light fruit yogurt, the flavour was strong, but refreshing. The whole dessert was kind of airy since they also dismissed using a regular pie crust and exchanged it for a thin filo pastry cup instead. It was exactly what we were looking for after our heavier mains. 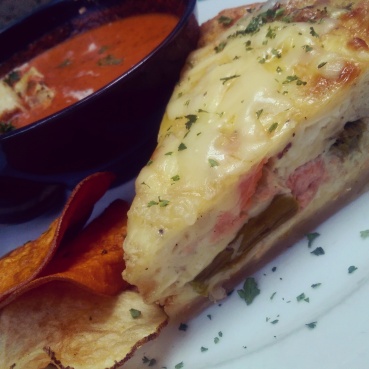 A close-up of my mom’s salmon and asparagus quiche. 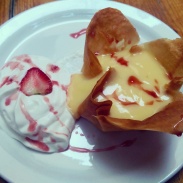 I can certainly see why The Dish Bistro is still a favourite of diners thirty-five years after opening their doors. Coming in at No. 45 on The Tomato‘s list of 100 best eats and drinks in Edmonton for 2013, they certainly have continued to excel at contemporary comfort fare.