The food menu at Belgravia Hub.

Every single weekday for the last few years, I’ve ridden the LRT from the south side of the city to downtown in the morning and then back again after work. Ten stops along the way, most of which have some sort of association with them. The only one that held no significance to me was McKernan/Belgravia station. From what I could see through the windows as we rolled on by was a largely residential neighbourhood with a school across the street. I would never have suspected that a fantastic restaurant lay in the area’s midst.

I started hearing raves about a place called Belgravia Hub (@BelgraviaHub) from a few of my university classmates when we met for a catch up. Naturally, I Googled the restaurant to see where it was located and, despite seeing it on the map, I still couldn’t quite place where exactly it would be should I step off the train at that stop and proceed to make my way there. I’m terrible with directions though, so it didn’t necessarily surprise me. I continued to think that if I looked hard enough down the street as we continued down the track, I’d spot it, but I never could. It turns out it’s tucked in a little too far for that. Then, the second annual list of Edmonton’s best eats was published by The Tomato in March of 2014 and the eatery debuted at No. 45. I became more determined to try this place out. Of course, other plans and life got in the way last year and it never happened. 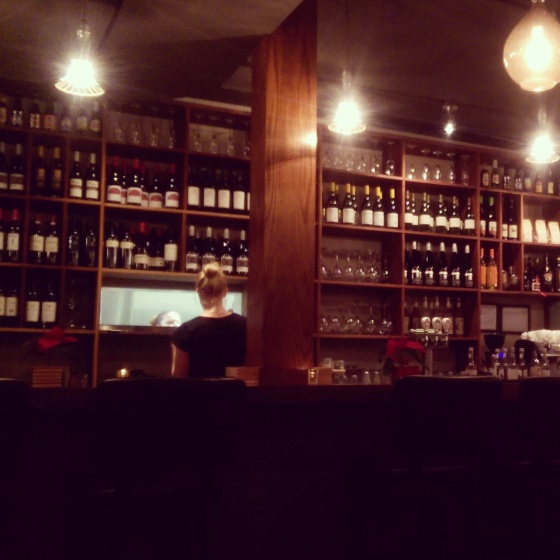 The bar of the restaurant.

I did eventually make my way there with a friend (by car) this January. Starving as we circled the block, the lights from the unassuming building were like a beacon calling us in. Located in a tiny strip at 76 Avenue and 115 Street there are a decent amount of parking spots in their lot as well as on the street to match the number of diners that they can accommodate at any one time. With less than a dozen tables and about eight bar seats, it’s quite a small establishment. Yet, it has a sleek and simultaneously homey feel that really makes you feel welcome.

Since we had made a reservation ahead of time, we were directed to a table immediately. It was fairly early, so it was rather quiet, but business did pick up later in the evening. The server was very friendly and made a few recommendations for drinks. We opted for lemonade over beer or wine this time, and we also decided to start with an order of their corn fritters.

The fritters arrived at our table piled high in a silver bucket. Looking plump, they were accompanied by sides of smoked ketchup and strawberry jam. Dense enough, so the fritter stayed together when cut open, they were warm and soft with a nice crisp shell. Slathered with the smoked ketchup, they were a savoury treat that seemed to have a bit of a kick to it. On the other hand, when spread with strawberry jam, we ended up with that delectable combo of salty and sweet flavours. Honestly, I couldn’t decide which I preferred. Both combinations were excellent and, if there wasn’t more food on the way, I would have been happy to eat those corn fritters all night. 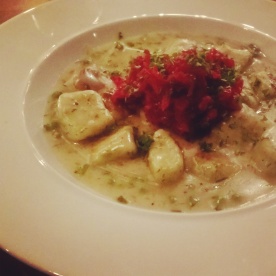 Nevertheless, we continued on with our meal. My friend selected the sweet pea gnocchi while I couldn’t say no to the braised beef shortrib. Generously portioned, the giant pieces of handmade gnocchi dumplings were swimming in a creamy dill sauce, which was topped with a beet salsa. The sauce was a good consistency with the scent of the herb coming through nicely. It tasted and felt rich without being overly heavy. The beet salsa provided a needed sweet and earthy flavour as well as additional texture. The shortrib was just spectacular. The meat from the two decent sized pieces of shortrib on the bone were really enough for two meals (I took half of my food home). Succulent from marinating in its juices, the meat just fell apart. Paired with the an apple cabbage slaw that provided crunch, bitterness and tang to the dish and a warm dill potato salad that came off like more of a Dijon with the use of mustard seeds, this was, to me, home-style cooking at its finest. 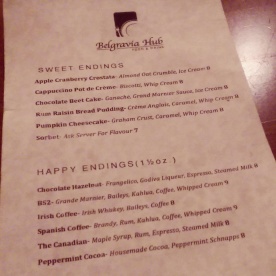 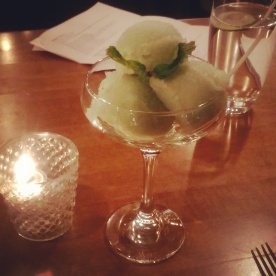 As full as we were, to finish off our dinner as we discussed our upcoming vacation, we had to sample a couple of their desserts. Because my friend polished off her plate of gnocchi, she went with that day’s choice of sorbet – green apple – and I chose the chocolate beet cake. The sorbet was smoother than I expected it would be and sweeter, too. Not too sugary though, so it was a great palate cleanser. While the initial bites of the chocolate beet cake were good, it was almost like the density of the cake made it seem drier than it should have been. Covered with a layer of ganache instead of the usual frosting and just a little bit of caramel on the plate, I liked the flavour, but the texture could have been improved upon.

All-in-all, I loved Belgravia Hub. The service slowed as the night progressed as there was only one server working and it got busier the later we were there. Thankfully, we weren’t in any sort of rush, so we didn’t necessarily mind that. Most importantly, the food surprised me. I’d heard it was good, but most everything I tried surpassed my expectations, so I’m excited to return and eat something different off the menu. The restaurant, open for about two years now, still comes across as a hidden treasure. In a way, I hope it stays like that, but I also wish the establishment the very best because this is a treasure that you want to keep for a long time to come.

For a more in-depth look at this establishment’s involvement in the local community and its efforts towards sustainability visit The Local Good to read my profile of Belgravia Hub. 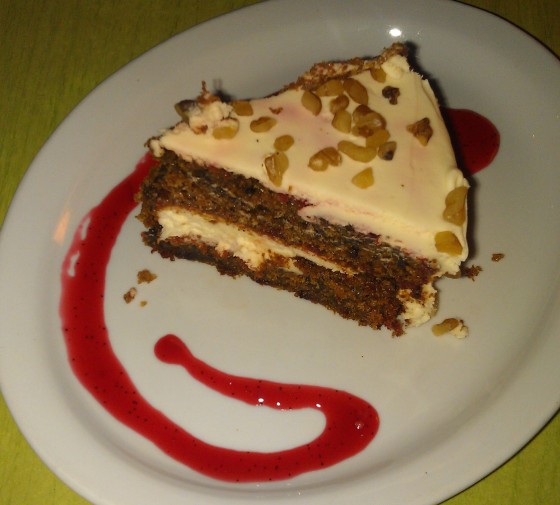 I’ve been going to Blue Plate Diner (@blueplatediner) for years now. It’s one of my go-to restaurants for those hearty homemade type meals. What really draws me there is the quirkiness of the place, which has a decidedly vintage 70s vibe with the diner tables, mismatched chairs, unique table lamps and colourfully painted walls. In other words, you know that even though they’re striving for an almost nostalgic type of atmosphere, you’re not going to get plain and boring food.

Named to the No. 64 spot on The Tomato‘s list of the top 100 best eats and drinks in Edmonton in 2013, the establishment has clearly remained a favourite of city diners over the years. For me, the food as well as the convenience of the place are what keep me coming back. Located on 104 Street just north of Jasper Avenue, it is just blocks away from work, making this a popular choice for meetups with friends during lunch hour or even for large groups. One of my more recent visits was after work near the end of May. My friend and I had a lovely dinner before going to see City and Colour at Rexall Place. Situated so close to the LRT station, it was a no-brainer that particular evening.

The veggie burger with a side of caesar salad and a coconut caipirinha cocktail.

Known for their veggie burger, I had never tried it before, so this time I took the opportunity to eat what many have enjoyed in the past. It came to the table with a steak knife holding the bun and “meat” in place. The patty truly looked like an actual piece of beef. It had been grilled, but upon biting into it, it had a more malleable texture, a consistency similar to tartar. I have no clue as to what exactly it was made out of, but I am guessing there were pureed beets, quinoa and onions in it, and possibly beans, too. It was served with Dijon mustard as well as tomato and lettuce (cheese is extra). I think the lack of bite and juice that you get from actual beef is something I missed going with the veggie burger. However, it tasted great and that’s what matters most. Ultimately, the burger and the side of caesar salad was really filling. The housemade salad dressing is perfectly creamy and not overly thick and every piece of green was nicely coated. It might be overload for some, but that’s just the way I like it. I often will just order a full size caesar salad with grilled chicken breast added to it as a meal. It’s particularly nice with a squeeze of lemon juice. And, even though I had my heart set on dessert, there was no way I was going to comfortably fit that into my stomach that night.

My other recommendations at Blue Plate Diner include the mac and cheese, which comes in a massive plate-bowl filled with cavatappi pasta in a creamy béchamel sauce. Loaded with cheddar, mozzarella and asiago cheese and topped with diced tomatoes, it’s a classic. I admit that I remember it being better on previous occasions, but it is still one of my top choices on the menu. For dessert, do order their beet cake! Like carrot cake’s relative, it’s a toothsome selection that is topped with orange-cream cheese icing and walnuts, but potentially more moist. I was just there on a recent Saturday afternoon for a book club discussion and a slice for dessert plus a cup of chai latte was perfect to cure the doldrums on that rainy day.

On a side note, they used to have a falafel dish that my friends miss it as it is no longer on the menu. I’m surprised that, for an establishment that tends to stick to the tried and true, that they removed this popular item. I assumed it was a top choice for patrons because I had been told it was really good, but perhaps I’m wrong. Who knows though, maybe one day they’ll bring it back? 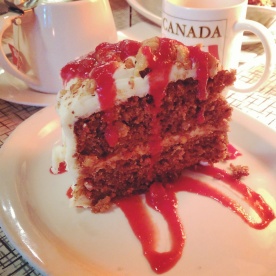 Cups of chai latte to warm us up on a rainy day!

Overall, Blue Plate Diner is a one-of-a-kind, family-owned business that seems very community oriented. Showcasing rotating pieces from local artists on the walls, you can see that this is a place that strives to be both welcoming and supportive, which is why it is a great venue for friends to congregate. They will accommodate large reservations as the space and the tables can be rearranged to seat a variety of group sizes. Having done so myself, I know that they do their best to ensure friendly and reliable service. Every so often, service can be a little slow when the establishment is full, but, if you’re not in a rush, the din coming from the happy people that sit among you is rather nice. It reminds you that life is too good to take too seriously, and, really, Blue Plate Diner is all about finding the fun in your food and your surroundings.

For a more in-depth look at the establishment’s involvement in the community and its efforts towards sustainability visit The Local Good to read my profile of Blue Plate Diner.