This past Saturday, Edmonton’s first show devoted to pins and patches was held. Called Share the Flair, organizers Julie Morrison of Majesty and Friends, Jenny Chan of Hop & Flop, Emilia Housch of Light of the Moon Pins, and Courtenay McKay of JOJO & GUN put together the one-day event to showcase this revitalized form of miniature art. I remember collecting pins as a child, so this was pretty nostalgic for me.

In essence, each piece of metal or fabric purchased supports the creators’ ideas and allows the buyer to express a bit of their personality. At Acacia Masonic Hall just off of Whyte Avenue and 104 Street, it seemed that locals were more than excited and ready for something like this.

Waiting in line to get through those doors. Even this point, it was another 20 to 30 minutes.

Many, including myself, lined up down the block for well over an hour just to get in the doors. Apparently, some enthusiasts were even waiting outside by 7:30am, two and a half hours before the show was to launch. I arrived just 15 minutes before the ten o’clock start and was impressed at the turn out for an inaugural event. They estimated that 500-600 people would come by, but I’m guessing that they probably surpassed that.

Finally made it close to the entrance!

By the time I got to the table to pay my entrance fee of $4, all of the one hundred swag bags had already been handed out. I’m not entirely sure what was in each of them, but the Instagram posts on the Share the Flair page indicated that there was plenty of fun stuff that had been provided for those early birds. During the wait, volunteers also gave away complimentary cotton candy as a treat.

My bingo card and a volunteer making cotton candy.

On the plus side, everyone who made it through the doors got to earn a little something extra with their ingenious idea of bingo cards. For every purchase made from the twenty or so vendors, a stamp was placed on the card. If you got a full row, column or diagonal line, you got to spin the wheel at a table that was filled with freebies from sponsors and participating merchants.

Freebie pins from the table at the entrance.

There was plenty of creative talent there, all of them based out of Edmonton and surrounding areas. As much as I wanted to buy something from every single one of them, I had to stick to a budget. So, I sadly missed out on the anatomical heart from Majesty and Friends as well as the crows and teacup owl from Sabtastic (I’ll pick those up down the road) and the gorgeous hand-sawn copper pieces from Smithstine (more expensive than the average manufactured pin because of the nature of how they’re made), which were added to Kristine MacDonald’s line specifically for Share the Flair. 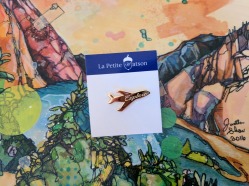 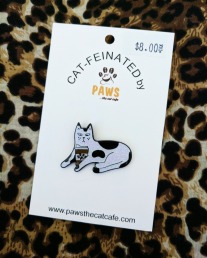 The cats eyes make me laugh on this pin from Paws the Cat Cafe.

Pins from Crystal Driedger, including a Bingo Card win!

Still, with most pieces ranging from $8 to $15 each, I walked away with a treasure trove of new pins from the aforementioned Hop & Flop and JOJO & GUN, my good friend Lea St John who is known as La Petite Watson for her work (and “Experience Explorista” travel blog), Paws the Cat Cafe, and artists Crystal Driedger, Jess from Daymare, and Jacinda Cote from Story Wild Studios. Additionally, I indulged in a couple sweet treats from Caramunchies (they had branded pins for sale). 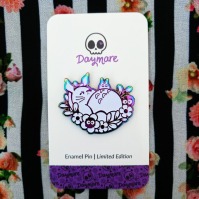 I had my eye on this Totoro pin from Daymare.

This is a good reminder from Story Wild Studios.

I’m not sure yet when the second Share the Flair show will be, but give them a follow or like on social media to keep in the loop. My hope for the next event is that they’ll have an expanded venue (with some air conditioning), so that they can accommodate more vendors and a larger capacity of people at once to reduce the overall wait time. It’s not often that I’ll stand in a line for more than an hour and a half. I just really wanted to support my friend and the community on this initial go round.

Congrats to everyone who organized, sponsored and volunteered for Share the Flair. You did a phenomenal job with planning and executing this event. I think it’s going to be a mainstay of the annual Edmonton arts scene going forward!