The menu is written on the chalk board above the front counter.

Farrow has been around for a little over a year and a half, and, in that time, it has made The Tomato‘s list of top 100 eats in Edmonton twice. In fact, it was voted by readers to the number one spot in 2015.

Being close to the Garneau and Old Strathcona, it’s a bit out of my way, so it wasn’t until this past summer’s Taste of Edmonton, which takes place near my office, that I was able to sample their offerings. Their menu changes all the time, but during our annual food festival, they presented two choices: roast beef and pulled pork.

I tried the roast beef when I was there. It was a small little slider served with chips, but I could tell all of the ingredients were extremely fresh. The arugula was crispy and the roast beef was thinly sliced. Most of the flavour came from the horseradish mayo and the pickled onions. It was decent, but not totally memorable. When my friend finished her roast beef sandwich, she stated their pulled pork slider was the better of the options they brought to Taste.

Flash forward a few weeks to August and the both of us were hanging out at the Fringe Theatre Festival. Since we were spending a full day trekking all over the Old Scona area from show to show with ample time in between, we decided that this was our opportunity to drop by the actual shop on 109 Street.

We perused the succinct menu and, in the end, we both chose to go with the Grick Middle, which is the sandwich that has been heavily lauded by the media and fans of the eatery. It’s the only one that remains a staple at Farrow. By and large, this is basically a glorified breakfast sandwich. Filled with a Four Whistle Farm fried egg, Sangudo bacon, smoked cheddar, rosemary aioli and arugula, the idea of the “unprocessed” comes to mind. 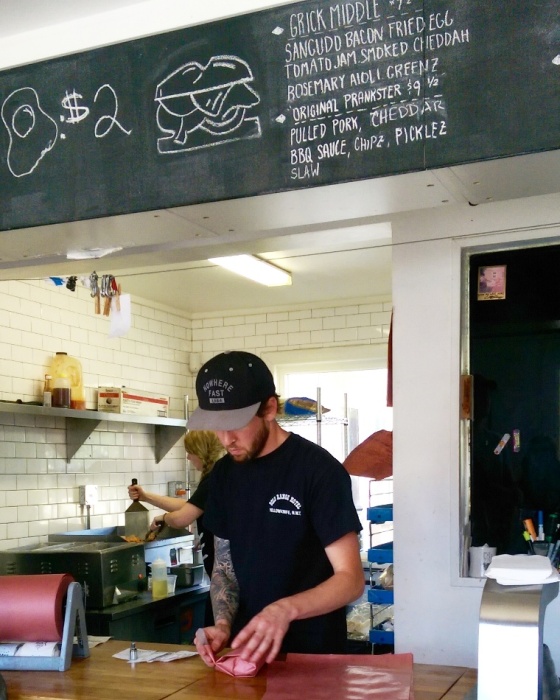 One of the staff packing up my sandwich.

As they were preparing our orders, I watched the staff in the open kitchen fry up the eggs and put everything together. They wrapped up the sandwich lovingly in thick deli packing paper and sealed it with their logo. The location itself is tiny. There are about three bar stools that look out the window and another four to six seats at the picnic table that sits outside the shop’s steps right next to the sidewalk. It’s not the most comfortable, so we took our parcels and walked over to the park between Garneau Theatre and Upper Crust.

I unwrapped my package and, after examining the sandwich and how to approach it, I took a few bites. So far, it was okay. Eventually, I hit the egg yolk and, not only was the bread now soaked, but so were my hands. It’s a messy one. Once the egg yolk breaks, it coats the sandwich and it gives it a different mouthfeel. A fried egg on anything just improves it, and I think this sandwich needs that.

You can tell that everything is made fresh and from scratch, which is great, but I wasn’t blown away by the combination or the flavours, and I sort of think that it was lacking in terms of portion size. The sandwich looks big, but it mostly consisted of bread, egg and arugula. There wasn’t enough bacon for me to really discern that taste in every bite I had. Maybe for $7.50, my expectations were too high, but considering that is over $2 more than a breakfast sandwich at Starbucks and it didn’t truly satisfy me, I probably won’t be spending that much on the Grick Middle again. 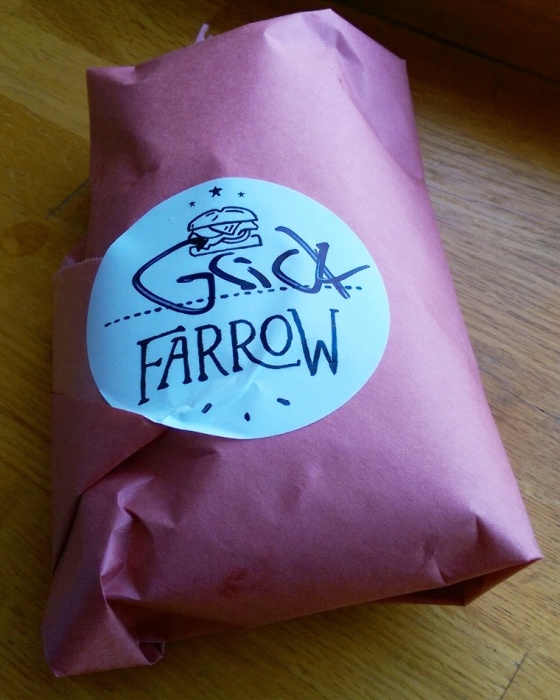 It’s not to say that Farrow isn’t what everyone says it is. To each their own, really. I can see why people like the place. They’ve brought the popularity of the sandwich back. This isn’t what your mom packed for you during your school days. These are grown up versions, and I love a sandwich that is piled high with ingredients that play off each other and make you crave having it over and over.

This one didn’t do it for me, but it’s not to say another of Farrow’s sandwiches won’t be the one that wins me over. For now, Farrow is good, but, personally, it’s not great. It might get there someday though.