Over the past 15 years, the menu at Lazia has shifted, moving away from their origins as an Asian fusion restaurant. However, the new menu, introduced this summer, is a realignment to the type of cuisine they started with. There are still a few items meant to appease those who just want a straight up steak and potato dish, and there are about a handful that present a more Mediterranean leaning. Yet, the majority of the dishes have hints of Chinese, Thai and Malaysian influences (owner Richard Lim is Chinese by way of Malaysia) that are combined with flavours found across the globe.

Having had the opportunity to profile Richard’s other restaurant, Wildflower Grill, for The Local Good last year, I was pleasantly surprised to hear from his daughter, Tamara, who reached out to me through Twitter in August. Lazia’s menu had been updated for the fall season, and Richard wanted to invite me out for a one-on-one tasting session (myself and two guests). Being that I’m a fairly frequent patron of the restaurant since I work rather close by and I cannot pass up the offer of food, I wholeheartedly accepted the chance to gain more in-depth knowledge of their dishes and to meet Richard in-person.

Although I would recognize the bartender or the managers any day, funnily enough, I cannot recall ever seeing Richard prior to this past week. He told me that he’s always there, but he prefers to be in the background, making sure that things are running smoothly in the kitchen.

Things seemed to go very well on the quiet Wednesday evening that we dined. Richard and our server, Dave (who is usually a supervisor, but was attending to our every need this particular night), were incredible hosts. To start things off, they suggested a few beverages from their drink menu – a golden margarita, the grand phoenix martini and a lavender blueberry collins – of which we each sampled one. While we waited for our cocktails to be prepared, Richard took the time to go through the menu items that he thought we should sample. Then he left us to ponder. In the end, we decided to just go with the suggestions that were put forth. After all, Richard should know best. 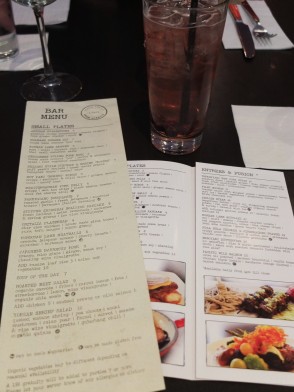 The current bar menu as well as the full menu. 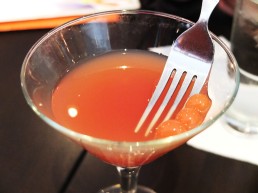 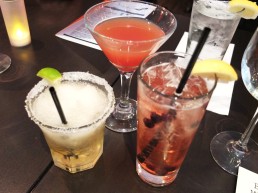 Our drinks for the evening: Golden Margarita, Grand Phoenix and Lavender Blueberry Collins.

Let me start by talking about those drinks.

The golden margarita was a more traditional blend of tequila, Grand Marnier, lime juice and agave nectar with the glass rimmed in salt. This is a cocktail that my friend would not typically order because of the tendency to be more sweet, but this one leaned towards a slightly bitter and tart flavour instead. It actually went down quite smoothly.

My mom also joined us, and she chose the grand phoenix because she liked the name. This one was a blend of vanilla vodka, pomegranate liqueur, orange juice and Grand Marnier. For an added dose of fun and decadence, the drink was lit on fire and then topped off with blood orange gel capsules (they used molecular gastronomy to prepare the natural acids from the juice in a certain way, creating these balls that, when popped, gave an extra shot of flavour), which floated in the liquid.

I had opted to go with the lavender blueberry collins. This one consisted of elderflower liqueur, gin, fresh lemon, lavender and blueberries. I missed the note in the menu about it being “in a fog,” so I was in awe to see that it arrived at the table in a capped bottle that once opened released a heavy dose of vapour like a potion in a witch’s cauldron. It was awesome! So great, in fact, that I simply watched that happen instead of pulling out my camera to capture it.

Now that we were happily imbibing, we had to start preparing ourselves for the meal at hand.

To begin, the kitchen created their daily amuse bouche. It’s a chance for the chefs to experiment with flavours and ingredients that they may not otherwise get to use. This is something that I notice Lazia has started to incorporate into their experience, borrowing from what you’d find at the arguably higher end Wildflower Grill.

My plate of appetizers. 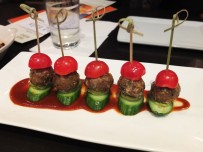 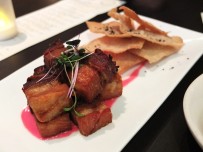 The Moroccan lamb meatballs were skewered with a whole cherry tomato, avocado, jalapeno mousse and a thick slice of cucumber atop a bed of barbecue sauce. The 15 spices used within the meat really brought in a lot of flavour. This is a good choice if you want a starter that isn’t too heavy.

The Japanese barbecue pork really moves away from the traditional BBQ pork that you might find at a Chinese restaurant with the thick accompanying sauce. The pork is cooked with an orange, miso glaze and served in a ginger, sweet soy, Shaoxing wine vinaigrette. The tanginess and lightness of the sauce paired very well with the meat.

The Mediterranean pork belly was by far my favourite appetizer of the evening. Pork belly is becoming a rather common dish on menus across the city, but not everyone does it justice. Lazia’s dish was near perfection for me (don’t hold it against me if you go and you don’t agree). The pieces of pork belly were crisped so well on the outside, making that fatty layer disappear, all the while leaving the meat quite tender on the inside. I’m also so glad that Richard brought us an extra side of the duck fat cherry aioli for dipping because that sauce was so delicious with the pork belly or placed on the side of wonton chips dusted with black sesame powder that came with the dish.

Next up was the roasted beet salad, which had been made on a more miniature scale for the evening, allowing us to see the true colours and composition of the dish. It’s a beautiful course and one that the entire table would highly recommend. The plate is first covered with a layer of the lemon, miso vinaigrette dressing and then each ingredient is carefully placed on top. A mix of organic carrots, carrot leaves, frisee, strawberries, orange, rainbow cauliflower, red and yellow beets, feta, sponge cake and chia seeds, this would make for a wonderfully healthy and tasty lunch or dinner.

Good thing I wore some forgiving clothes because what followed were three entrees that were shared between me and my guests. Laid out before us was the hula hula chicken & firecracker prawns, the pacific wild salmon and the teppanyaki New York steak.

The prawns were large and had a good amount of heat from the seasoning and the chicken breast was cooked until tender, not overdone at all. Paired with a cilantro gremolata, it was the herbs that took me by surprise. Most people who know me are aware that I am not a fan of cilantro. I have one of those palates that believes that cilantro tastes like soap. But, I didn’t even realize that’s what I was eating in this dish. My friend once said that, supposedly, if cilantro is crushed, the molecule that creates that unbecoming flavour is destroyed. Perhaps that’s the reason why I found it to be pleasant. Crispy polenta formed a base for the chicken and the prawns, along with a zucchini and carrot pave – thinly sliced and layered like scalloped potatoes – and a pineapple, Malibu rum sauce. The sauce tasted a bit too sweet on its own, but it was great to offset the spice from the prawns.

As explained by Richard, the BC sockeye salmon served with skin was seared on both sides and then poached in olive oil to create the crisp outer texture while keeping the juices in the center. A painterly swipe of carrot emulsion graced the plate, which was topped with sauteed broccolini, confit tomatoes and a lovely combination of chorizo and black lentils. The latter provided a smoky flavor, contrasting well with bites of the mandarin orange chutney topped fish.

I left the steak as the last to discuss because this one had an interesting back story. Had Richard not told us, I never would have guessed that this dish was a mix of Japanese (easy to see) and Mexican (not so evident at first) influences. The steak itself is prepared using a yakitori glaze; it is plated with pickled ginger and togarashi on top and a bed of chile hollandaise. A miso, sesame dressing sat on the side with flash fried cauliflower and fingerling potatoes. All the elements were done well, even that Mexican inspired chile hollandaise. As it turns out, Richard loves Mexican food, and one of his favourite restaurants is in Phoenix, AZ. There they can cook with hatch chile peppers, which have a fairly low spicy heat rating on the Scoville scale, but give off enough of a fresh, earthy pungency to make a manageable impact. Unfortunately, hatch chile peppers are not available in Alberta, so Richard worked with his chefs to find a mixture of peppers that can be purchased locally that, when combined, closely emulates the taste of the hatch chile. 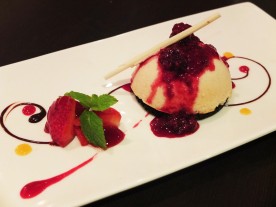 If you don’t already feel full reading about all of the food we had eaten so far, you will be after learning that we also split two desserts: the raspberry white chocolate cheesecake and the dark chocolate raspberry bomb. Little works of art, the sweet endings were nicely plated. Both had a bit of weight to them, but the cheesecake came off as less dense, which was welcome. They’re actually great for sharing, especially after a large meal.

Overall, I would say that the menu, in its various incarnations, has had its ups and downs, but what we sampled last week was fantastic. The experimentation and playfulness that has been shown with the options that they’ve decided to put on their latest menu is a testament to the talent in their kitchen. Everything we tried was thoughtfully prepared, and I was impressed, not just with the taste and texture, but also the presentation. It was almost as if the Wildflower chefs had taken over. The level of craftsmanship from the bar to the kitchen was close to on par with Richard’s more upscale offering, but at a slightly better price point.

Based on what I had the pleasure of tasting, their effort to step back and reassess what they do best is working for them. Now, they just need you to remember that they’re an option when you’re in the downtown area. And, should you be worried about parking, don’t fret. While nearby construction is taking its toll, Lazia offers free secure, heated underground parking in the West Preferred Parkade by the Bay at City Centre Mall every weekday evening after 5:30pm and all day on weekends.

Lazia is definitely worth a visit, or a revisit if you haven’t been in quite some time.