45 minutes on the clock. I usually think it’s best not to look at it.

What’s an escape game? You’re with a group, given a scenario, locked in a room and you’re left to solve numerous riddles or puzzles in order to successfully complete your mission within a 45 minute (the typical amount) time frame. If you fail, you’re doomed to stay there for eternity.

The popularity of escape games is increasing in Edmonton. Cities like Vancouver/Richmond have plenty (at least a dozen different ones that I could find online) and we’re following suit. Within less than a year, three businesses have opened. They’re able to thrive because there’s an insatiable appetite for more once you’ve played. I’ve tried 4 of the rooms at Breakout Entertainment (located in the west end in Mayfield; they periodically replace older games with something new) since they opened last fall and I’ve often discussed the game with anyone who would listen to me, blogging about the idea on The Local Good.

Though Eescape (a.k.a. Edmonton Escape), the second business of this sort, has been open in the heart of downtown since May, I’ve yet to make it there. However, my co-workers and I are planning on testing ourselves during our lunch break soon. Whether or not we all still get along afterwards is yet to be determined. So, that’s my first tip. Pick a good group of people to go with. It’s okay to have competitive players because they’ll probably give it their all until the very end, but hopefully no one with hold a grudge against each other if you fail to get out. After all, it’s just for fun.

Thankfully, I had an excellent group with me when I had a chance to try Edmonton’s newest addition to the market, Escape City, which is located on the south side of the city. I actually stumbled upon them in a random manner. I happened to come across a job link on Google when they were still looking to hire staff. Their name gave it away, and I started feverishly searching for more information. Eventually, I found their website with the Sin City-esque font, colours and film noir feel, and an intriguing link to sign up for early access.

After I signed up at the beginning of July, I reached out to co-owner Mike Ringrose, who you’ve probably heard on the radio or seen in the paper talking about this now. Within the month, they arranged for beta-testing of their three rooms and I managed to snag a spot for four of us. 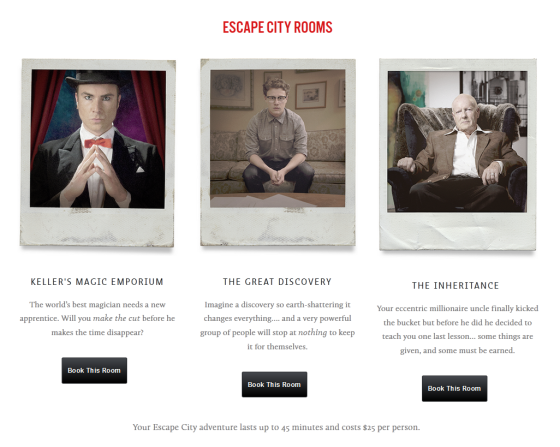 The scenarios at Escape City. Each game can take up to 6 players at $25 each. Image: Courtesy of Escape City.

We played Keller’s Magic Emporium, the only one with a disclaimer warning of mature content. It’s also the only one that requires you to sign two waivers because if the aforementioned content. I would recommend this as a great starter room for those new to escape games, so long as you’re an adult or you’re in your late teens. While I don’t want to give anything about that game away, I will tell you that the room is very sleekly done. Escape City worked with local actors, set designers and contractors to create each space and the workmanship shows.

My friends and I thought that the setup of this room was quite linear (I’ve heard the others are not), which likely worked to our benefit. We were out within a record 30 minutes of the 45 you’re given. At the time, Mike said we were the fastest group. It made us feel super smart, especially since this was the first time I’d managed to escape one of these before. It is by design though. This particular room was made to be the easiest of the bunch with an escape rate aimed at 25 per cent. As Mike said, “who doesn’t like to win?”

While that sentiment is true, and we certainly felt awesome afterwards, I don’t think that losing at these games is a drawback to their business either. The failure of getting through and that feeling of being so close to the finish, but in actuality not, is what makes escape games so addictive. My friend joined me at one of these and it was his first time playing. When we left, he spent the better part of two hours bringing the conversation back to the game – what if we’d done this, or if only we’d done that.

It gets stuck in your brain. In an interview with Metro, Mike said that multiple businesses of this genre can coexist because once someone has played a game, even if they didn’t succeed in getting out, they’re not going to come back to play the same one. Customers will seek out another venue for a fresh challenge. And, while I think the sentiment holds true to some extent, I also know people who have played the same scenarios more than once because they truly were at a loss the first time around and were determined to get out on another visit (B.O.M.B. at Breakout is one of those). 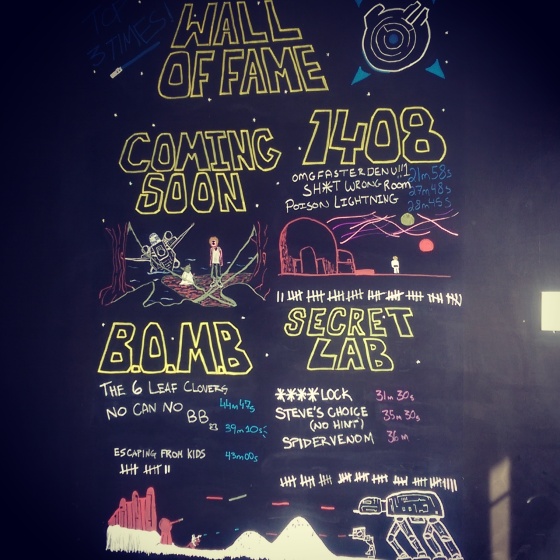 The Wall of Fame at Breakout. As you can see, B.O.M.B., is quite difficult (also fairly new at the time).

What I love most about these places is that you’re really using your intellect, you’re bonding with people (you know or may not) and you’re getting away from your phone (you must put all of your possessions in a locker before entering the room) and taking a break from life’s other worries.

So, if you have not tried an escape game, you should give it a shot. You won’t be sorry. If you’ve already been, you know what I’ve been talking about.

Best of all, I’m excited to run my first contest on this blog! I’ll be giving away two pairs of complimentary entries to play at Escape City. Each winner will receive a one-time use code valid for two full price tickets ($50 value) to the game of their choice.

To enter the draw, please leave a comment below. A winner will be chosen on August 31, 2015.

UPDATE (September 7, 2015): The two winners of the giveaway were Trevor Carter (TJ) and Sheralee Tumm! Congratulations!