The Sugarbowl (@sugarbowlcafe), serving Edmontonians in various forms since 1943, is a community favourite in an area peppered with popular independent restaurants. Known for their famous cinnamon buns (Seriously, who would have thought that a roll without cream cheese icing would be so good! Plus, one bun is essentially a meal on its own.), they have plenty of other items to please the palate. 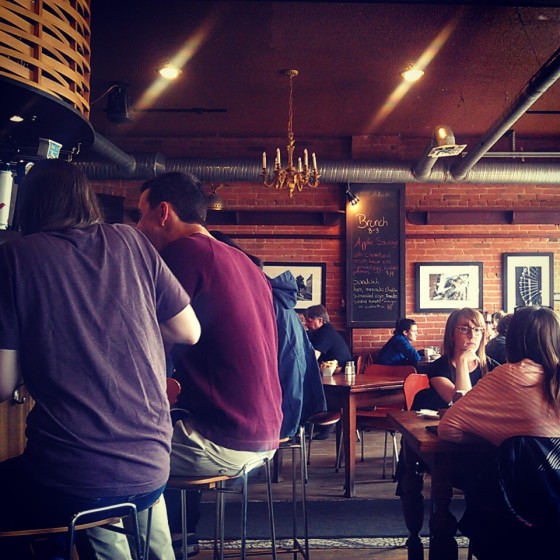 Patrons enjoying their meals and conversations.

My very first visit to the establishment was several years ago, likely when I was still finishing up my Bachelor’s degree. I ordered the lamb burger and was blown away by the flavour of the meat and the use of goat cheese, a combination I had not yet experienced at the time. I’ve never forgotten that burger or the restaurant. It was the place to be before it really mattered where you hung out. And, while I was a bit late to the game considering I was born and bred in the city, it has since become a top venue to chat with family over breakfast or meet up with friends for drinks.

My girlfriends and I did exactly that approximately a month and a half ago. We met up for brunch at about 11 AM on a Saturday morning knowing full well that, by arriving at that late hour on the weekend, we might possibly miss out on the coveted cinnamon buns (we were, in fact, too late to get one!). On the other hand, it was during that sweet spot between the early morning risers and the lunch crowd, so my friend managed to grab a table quickly before the rest of us got there.

The brunch menu is pretty succinct, so it wasn’t too hard to make our decisions that day. After finding out that the cinnamon bun was no longer an option, my friend chose to go with the french toast. My other friend ordered the huevos rancheros, which was one of the menu items that was mentioned on The Tomato‘s list of 100 best eats and drinks in Edmonton this year (overall, the restaurant came in at No. 5 in 2014 and No. 15 in 2013). I went with the chicken & waffle, a dish that seems to be a little more prevalent at food establishments lately. 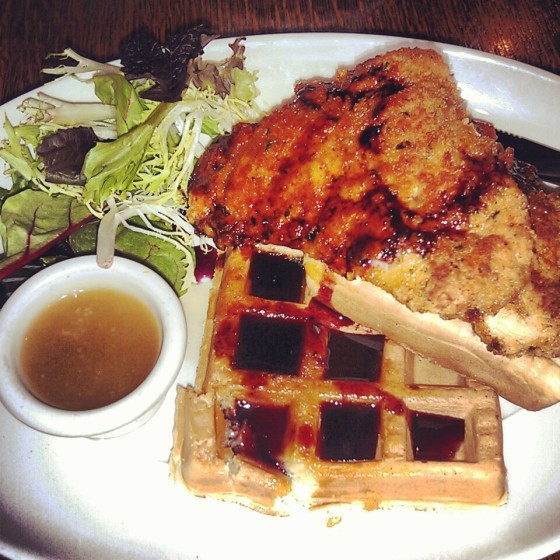 The chicken and waffles from the breakfast menu.

I didn’t sample my friends’ orders, but I was told that the french toast – fried brioche pastry/bread covered in berry compote and whipped cream – was a worthy alternative to the cinnamon bun goodness that she didn’t get to eat. I’m certain that if you’re looking for a somewhat sugary breakfast, the french toast will certainly do the job. The huevos rancheros, touted by patrons as one of the top selections for breakfast, turned out to be a bit underwhelming. Consisting of 2 eggs, corn tortilla, spicy beans, three cheeses and salsa verde, my friend wanted me to say that she thought the addition of a starch would have been ideal – hash browns or toast perhaps?

Personally, I was really happy with my chicken & waffle. Plated with two perfectly cooked waffles and two pieces of lightly breaded buttermilk, spice marinated chicken breasts, I knew I was in for a filling and hearty meal. Served with a small side of greens and a little cup of maple butter, it presented the scrumptious combination of savoury and sweet flavours. The spices from the chicken were strong enough to break through the almost too sugary maple taste as well as the blueberry syrup that I had added to my waffles. All-in-all, the dish is very well-balanced and a good contender for those who can never decide between having something salty or sweet during brunch. 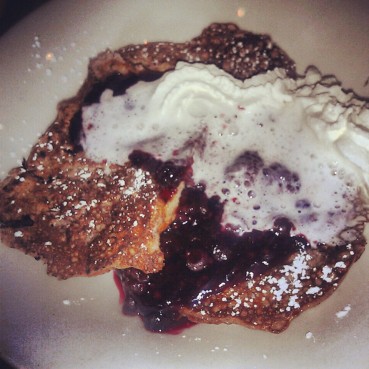 The French toast – not much to look at, but I’m told it was delicious! 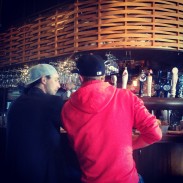 Diners sitting at the bar during a busy Saturday morning. 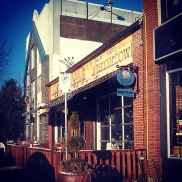 The exterior of the restaurant. Taken on a visit in October 2013. 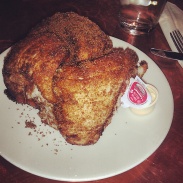 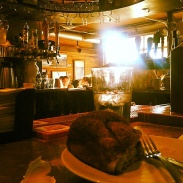 Enjoying my cinnamon bun at a bar seat during a busy morning in October 2013. 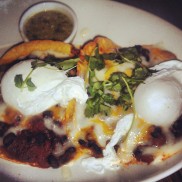 Sometime this summer, when the weather decides to stay steadily warm with just a light breeze, I would like to visit again for lunch or dinner on the patio. It’s been a while since I have had the opportunity to sample from those menus and I’d love to see if the lamb burger still lives up to my memory of it.

I also have to hand it to the servers here. They always have smiles on their faces, they are fun, friendly and they do a great job of checking in throughout your meal to remove empty dishes and refill drinks as needed without giving you the sense of being overbearing. There’s a real feeling of camaraderie between the staff that shines through, too.

When we were done our food, cappuccinos and orange juice, we cleared out to make room for others who were waiting patiently for tables. The only downside is that they don’t take reservations. But, I suppose that is part of the charm of the Sugarbowl. There’s something about being in line, anticipating your turn to sit down, watching everyone else have a great time, and knowing that you will soon join them.