Woodwork (@woodworkyeg), a relative newcomer to the Edmonton food scene, has already made quite the impact. Within four months of opening its doors in December 2013, the restaurant shot into the No. 20 spot on The Tomato’s second annual list of the city’s top 100 eats and drinks as voted by readers. I finally had a chance to try the place for myself one very windy, but snowless day at the end of April.

Situated inside the historic McLeod Building on 101 Street just north of Jasper Avenue, its bright blue neon sign, showcasing the art of Jill Stanton (@scenic_edmonton) who designed their distinctive logo, lights up the street. Smelling of wood-fired cooking and looking industrial yet feeling quite like the hipster hangout, this seemed like a fun place to perch myself for lunch with my friend in between work hours that day.

A view of the restaurant from the far end of the bar.

There really aren’t a whole lot of tables in the space as it’s rather long and narrow. However, pretty much every seat gives a decent view of the kitchen and the well-stocked bar that requires a rolling ladder, so the bartenders can reach the top shelf (perhaps where they keep their top-shelf liquor?) much like Beauty did in the Beast’s library in the fairy tale classic. The mix of wood, concrete, tile and metal gives it a workshop type atmosphere, but the use of lighter colours really warms the place up.

It wasn’t busy that particular day, but I had made a reservation through OpenTable, so we were seated promptly. The server who was warm and friendly (complimenting me on my outfit) brought us some carbonated Vivreau water while we perused the compact menu and made our decision. The four daily selections were all priced at $15, and each included your choice of kale salad, hickory fries or the soup of the day. Personally, I quite like that the restaurant keeps it simple with one cost for all the options, meaning price plays less of a role and food becomes the star when choosing what to eat.

The pork pie and the cream of potato soup!

Both of us opted for the same thing: pork pie with the soup of the day. Our meals were sitting in front of us about ten minutes after ordering. I might take the speed with which our food arrived to be a red flag at another establishment; however, seeing as how the pork pie turned out not to be individual mini pies, but, rather, slices from a larger pie that was likely baked fresh that morning, it made sense that all they had to do was reheat it in the wood-fired oven for a bit.

Since we selected the soup as our sides, we started with that while the bowl was still hot. It was a cream of potato soup with chives topped with waffle potato chips. I liked the presentation as the chips kind of gave it a home-cooked feel and a little touch of whimsy. The soup was actually lighter than I expected, not overly thick, and the potato was smoothly mashed or puréed, so there weren’t any large pieces of potato. The taste was quite subtle with the chives really bringing in additional flavour notes.

The pork pie was quite delicious. The meat was finely ground and lean, making for great texture without any unpleasant gristly bits. Mixed with fresh herbs, the pie was savoury while the tomato relish added a nice acidic contrast. Although the pork was wonderful and meant to be the anchor to the dish, my favourite part of the pie was the crust (I love a good pie crust!) because it was buttery and melt-in-your-mouth as it should be.

Sugar cookies on the house! A pleasant little surprise.

What I enjoyed most here were the little touches. When we had polished off our plates, we were presented with on the house sugar cookies for dessert. It was a lovely surprise and end to our lunch. It reminded me a lot of the The Makk – now closed – in that they were keen on the details such as cranberries or cucumber slices in your glasses of water, providing an amuse bouche as a palate cleanser in between courses and sending us off with a small box containing a cookie and a truffle as an after dinner snack for when we got home. If Woodwork consistently presents classic yet elevated selections and continues to charm patrons with those types of small, but appreciated extras, it will remain a top choice for many in this city.

At some point I will have to revisit this establishment for dinner. The menu changes regularly and covers bar snacks, small plates, large plates, sides and desserts. The options are eclectic, but never far from the farm-to-table (aside from the couple seafood dishes that may pop up) idea that the restaurant seems to be going for.

The view of the restaurant’s neon sign from inside. 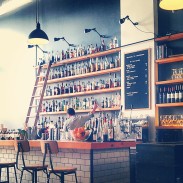 Another view of the well-stocked bar.

The open kitchen where they do all the wood-fired cooking.

I also came across Woodwork’s Sunday Dinner page on their website and I am intrigued. While all spots were purchased for the 2014 season, I will have to keep my eye out for 2015. It is a hefty cost of $300 per person for the year, but it’s worth considering. The amount gets you four seasonally-inspired dinners (one approximately every three months with all food included) and an invite to the exclusive pre-opening party. With just 50 members allowed, it’s sure to be an intimate experience.

That’s what I think is the appeal of the place – the fact that it’s inviting, intimate, friendly and cool all at the same time. I look forward to eating there again soon and trying something different.

Flowers from my love ❤️ Happy Valentine's Day!
When you're feeling under the weather and a hot bowl of ramen is all you want...but, a picture of one is the best you can do.