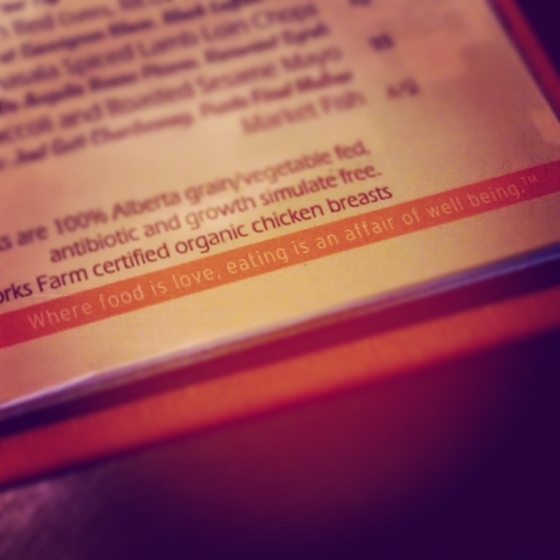 I had been to Wild Tangerine (@goWildTangerine) years ago, visiting after hearing many excellent reviews. While the experience at the time was great, for some reason, even though I kept telling myself to go back, I never did. Fast forward to the beginning of this month and I came across a Twitter post or perhaps a quick news snippet announcing the impending closure of the restaurant on June 21. I was shocked to hear that such a successful and loved establishment was deciding to shutter their business after 10 years, especially when siblings Judy and Wilson Wu’s passion for food has continued to shine so brightly (voted by readers into the No. 19 spot on The Tomato‘s list of 100 best eats and drinks in Edmonton in 2014 and No. 22 in 2013).

So, upon learning of the countdown to the restaurant’s final day, I immediately texted my friend and asked if she wanted to join me there for supper the following week. When she agreed that we should definitely make a point of going before it was too late, I reserved us a table and we were off to the races.

The interior of Wild Tangerine

Walking into the brightly lit and colourful space, it hadn’t changed much since my first meal there, but I could see that everything was well taken care of and had been kept in great condition. We were seated at a booth by the windows at the front, giving me a view of the entire room. Arriving a little before the dinner hour, there were only a handful of other occupied tables. However, as we dined, the restaurant was eventually filled to capacity with patrons both showing their love and wanting to indulge in one last meal that usually consisted of at least one order of their known shrimp lollipops.

Enticing as that appetizer sounded, my friend decided to go with Chef Judy’s famous Thai Green Curry with Prawns & Tortiglioni minus the seafood as she is allergic, making it a vegetarian dish. I opted to go with the Cha-Siu Organic Pembina Pork Tenderloin with Spicy Tangerine Glaze as well as a side of Gnocchi with Coconut Cream. What I love about their food is that they always serve everything with fresh seasonal vegetables, so you know you’re getting the best that producers have to offer and that the meat products are one hundred percent Alberta grain or vegetable fed in addition to being antibiotic and growth stimulant free.

My order of pork tenderloin and gnocchi with coconut cream.

I tasted a bit of my friend’s Thai Green Curry dish and the flavours were fantastic. It wasn’t overly spicy and was filled to the brim with green beans, zucchini, red peppers and eggplant. And, as we found out at the end of our supper, they were really fair in that they lowered the cost of my friend’s meal since she had asked for no prawns. They could have charged the regular price of the dish without resistance from us, but they went ahead and altered the cost in a way that was pleasantly surprising. It showed me that this is an independent business that really knows how to take care of their customers.

The Pork Tenderloin that I ordered was very good, too. The meat was, well, tender. Pork is often easily overcooked, but it was perfection here. The tangerine glaze was a nice balance to the saltiness of meat and the bok choy was another little nod to their Asian roots. Paired with the coconut cream covered gnocchi, I was easily satisfied. Of course, I still saved room for dessert, and, am I ever glad that I did!

The warm gingered bread pudding with black sesame ice cream. To die for!

When Wilson brought the dessert menu over to the table he made a quick disclaimer about the warm gingered bread pudding, saying they were now out of the typical banana ice cream and that they had replaced the usual with a black sesame seed version instead. That really didn’t matter to me. I was sold as soon as I saw bread pudding there and, truth be told, I love black sesame, so that is indeed what I went with. When the plate was placed on our table, it looked almost too good to eat. The ice cream was in this perfect little cube next to a round cylinder of the bread pudding that was encrusted with a thin layer of torched sugar like a crème brûlée. It was served with a side of blueberries and small cubes of watermelon. The whole dish was wonderful and really the best cap to my meal. The slightly gritty texture of the ice cream was a great compliment to the smoothness of the bread pudding and the fruit provided an excellent palate cleanser.

I would say that I can’t wait to go back again, but, alas, that is not to be the case this time around. Now, it’s more like I’m kicking myself for not having gone more often in the past. I don’t think I’m the only one who feels that way either. I overheard a table of ladies tell Wilson that they were sad to see the restaurant go, and although Wilson appreciated the sentiment, he wasn’t down about the idea, telling them it was just time for them to move on.

The dessert menu…everything sounded so good! 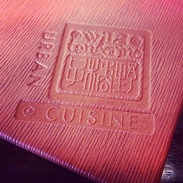 The restaurant’s logo on the cover of their menu.

My friend’s order of Judy’s Thai Green Curry with Tortiglioni.

The beverage I paired with my meal.

The good news is that Wild Tangerine will still remain in some form after June 21. Judy and Wilson will continue to manage their prepared foods business part-time, serving up items such as soups, snacks and bagged cuisine meals at the new Mother’s Market, a downtown farmers’ market that is located indoors and open year round on Friday, Saturday and Sunday at 102 Avenue and 109 Street.

With that, I wish the Wild Tangerine a fond farewell. It will truly be missed by Edmonton foodies. However, the show must go on, and I give three cheers to Judy and Wilson as they take their next steps! All the best!