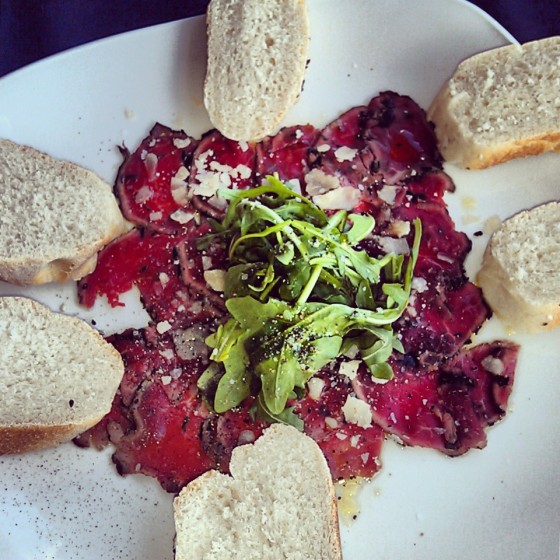 The Phork (@thePhork) graced Edmonton with its presence at the end of 2013, opening its doors shortly before Christmas. Housed in the previous home of The Copper Pot, I was completely unaware of this new restaurant until I happened upon their deal on Groupon. It seems that the establishment was greeted with little fanfare upon debuting, so I count myself lucky to have come across the place in this fashion. Otherwise, I might not have found out about it until much later.

Although I had the vouchers in hand, it still took me over three months to make my way there, perhaps because it seemed like a slightly out-of-the-way location. Situated near the Grandin LRT Station on the main floor of a small office building, it wasn’t close enough to work to make it there and back during my lunch hour, and it just never was the first to come to mind when making dinner plans during the week or on the weekend. However, after having been there twice now within the last month, I can say that I wish I hadn’t delayed going for as long as I did.

My mother dined with me on both occasions, the first of which was a lunch outing. We had made a reservation through e-mail that time, but had also called ahead to ask about the parking situation. As it turns out, there is free parking available in the building’s underground parkade. The three or four visitor spaces are good to use during lunch hours while the remaining spots open up during the evening. I doubt that this is common knowledge as this information isn’t really advertised on their site. Yet, I think it certainly gives people more incentive to go, knowing that there is going to be somewhere to park their car in an area where parking may not be that easy to come by.

Views of the park, river valley and High Level Bridge.

So, with that potential issue removed, we ventured into the restaurant where we were greeted quickly, although somewhat frantically, by a friendly guy who I learned later was Jameson the General Manager. Short staffed that day, he took on the role of server during lunch and promptly guided us to a raised booth that provided views of the High Level bridge and the park across the street. With about twenty or so tables that seat around four people each, it looked to be a quiet day as only a handful were being used. Despite that, I had high hopes.

Skipping drinks as it was still very early in the afternoon, we opted to stick to the food menu. I ordered the Boar Belly Chicken Club and my mom decided to go with the Grilled New York Steak. Both of us chose the seafood chowder for our side. When our dishes arrived at the table, my initial thought was that the size of the soup bowl was massive. For a side, they are very generous, and the soup was really delicious. It wasn’t very thick, but you could certainly taste the cream and it had a slight spiciness to it. It was also chock-full of muscles, pieces of salmon, halibut or cod, shrimp and vegetables. It honestly seemed like a full size order of soup and could have served as my whole meal. I’m definitely not complaining though. I consider it to be a plus that they don’t skimp on the portions.

With regards to my Boar Belly Chicken Club, it was quite delicious. I’m not certain what kind of bun they were using that day, but it was quite a crusty type of bread, which I am not that partial to, so I only ended up eating about half of the starch. However, I don’t feel that was a loss as it was a really large amount of bread and it wasn’t all necessary. The body of the sandwich included chicken breast, bacon (nicely crisped), which I’m guessing was the boar belly, aged cheddar, greens and tomato with bacon mayo. Overall, it may have been a little too salty for me when eaten whole. Yet, I enjoyed the strong smoky flavour and everything was well done.

The Grilled New York Steak with a side of Seafood Chowder!

The Grilled New York Steak was also a testament to the chef because it was cooked to perfection – incredibly tender and still pink. The meat sat on top of half an open-faced bun and was accompanied by sautéed mushrooms, Spanish onions, sun-dried tomato, spinach and Asiago cheese. I had several bites of it and it was so good. The different ingredients really melded together well and paired excellently with the steak. I would go back just for that.

We finished off lunch with an absolutely wonderful peach and mango crumble. The dessert was my favourite, and the single order was more than enough to share. Filled to the brim with large chunks of peach and mango, layered with crumble, candied pecans and walnuts and coming with a scoop of vanilla ice cream, it was a great treat for a spring day. Simple, but decadent, I was no longer hungry when we left.

If I can, I really do like to base my reviews off of more than one visit, so exactly a week later, we dropped in for dinner. This time, I reserved a table through the OpenTable system. As we arrived at 5:30 prior to the dinner rush (it was almost a full house by the time we left), we were promptly seated at a table next to the window. The view was basically the same as during our previous lunch, but I was now also able to see the Legislature building directly ahead of me as well as the High Level Bridge Streetcar passing by every so often.

The interior of The Phork.

Again, we opted to skip the drinks (Although, I will have to go back to try one of their tableside flare cocktails. They are served by local, professional flare bartenders and, according to their website, The Phork is the first and only restaurant in Edmonton to offer this service.) and concentrate on the food offerings (the supper menu is double-sided). Since Mother’s Day was coming up, we went all out and ordered three appetizers and a main to split, including Crispy Fried Truffled Mac & Cheese Balls, Smoked Jalapeno Blue Crab Cake, Beef Tenderloin Carpaccio and the Pistachio Crusted Rack of Lamb.

I’ll start with the Mac & Cheese Balls. These were awesome. The breading on the outside reminded me of the Mac and Cheese Maki at The Hat, but with a more even ratio of panko to pasta. The spicy chili Ketchup, truffle oil and what I assume to be shaved Asiago cheese that accompanied the balls were excellent additions that really elevated the palate of the dish while keeping from being overpowering. The two Crab Cakes were seared well. Plated with a side of gathered greens and honey & mustard aioli, it was a light appetizer that had that great balance of piquant and sweet profiles. The Beef Carpaccio came with fresh slices of sesame seed topped bread and thin sheets of beef tenderloin topped with baby arugula, shaved reggiano cheese, a sprinkle of coarse sea salt and a drizzle of EVOO. The beef was melt-in-your-mouth good, and the flavours from the extras were subtle enough to ensure that the meat remained the focus.

The view of the Legislature building from my seat. 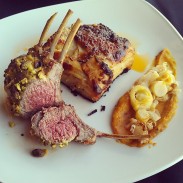 The Pistachio Crusted Rack of Lamb! 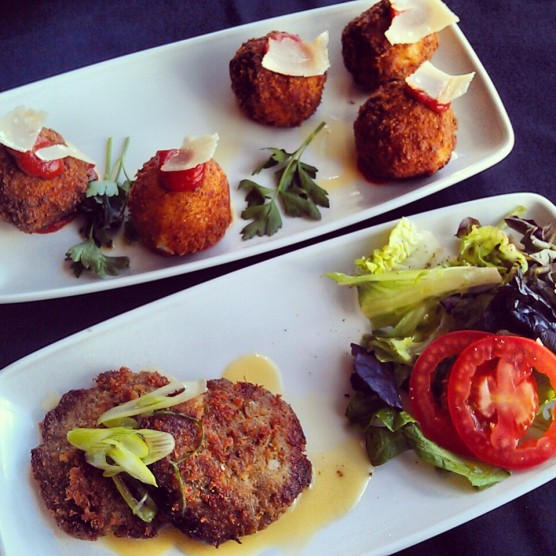 For the entrée, we divided the Rack of Lamb and I’m glad we did because the starters already provided plenty of food. On the other hand, I am also happy that we didn’t skip this main as the lamb was incredible. The kitchen really does an excellent job with the preparation and cooking of their meats. We asked for the lamb to be medium-rare and it came to us just as requested. The steak knife that was provided cut through the rack like butter and there was plenty of juicy meat on the bones, which isn’t always the case when ordering this dish. What I loved most was the strong Dijon mustard and crushed pistachio that crusted the lamb as it paired so well with the natural flavour of the meat. The brush of butternut squash puree and braised leeks were texturally appealing and gave the plate an artistic look. The side of sweet potato pave was a good starch to anchor the entrée, but there was so much that we couldn’t finish it.

Having experienced both their lunch and dinner services, I can safely say that this establishment is another fantastic addition to Edmonton’s growing restaurant scene. The bright, new interiors and the views make it appealing, and the personable service (although, they can refill water glasses more regularly) is something I noticed and has stuck with me.

For those who have yet to try The Phork, here are some potential incentives for you. Currently, the restaurant is offering $10 off lunch for groups of two or more during their Monday to Friday lunch hours. Every Tuesday they have half price off every wine after 4 PM, and Saturday evenings from 7 to 10 PM there is live music. I expect I’ll be back to indulge in beverages, more food and some music soon enough! It’s that good! 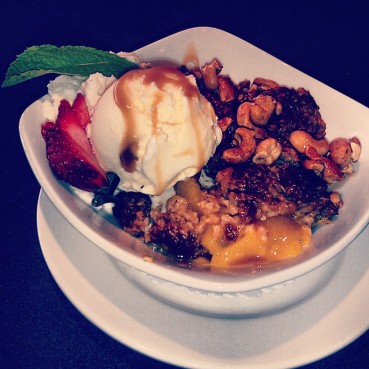 The Boar Belly Chicken Club with the Seafood Chowder

The entrance to the restaurant

One thought on “Edmonton Restaurant Review: The Phork (Closed)”