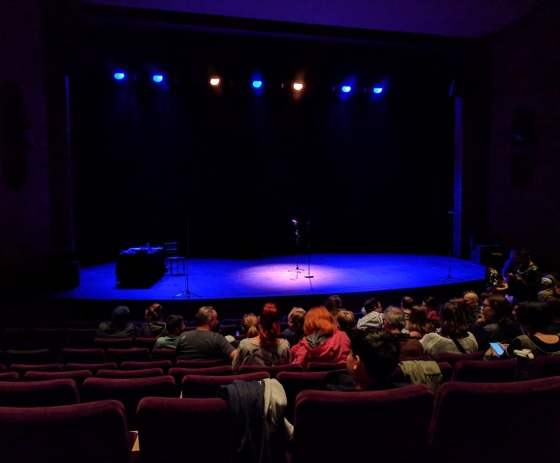 The stage at The Arden Theatre in St. Albert.

About two weeks ago, I dragged my fiancé to the latest Grownups Read Things They Wrote as Kids (GRTTWaK) event in St. Albert. It was the second one I’d attended. The first was two years before at The Mercury Room in Edmonton. I was, and still am, just a listener though. I’m not sure I’m brave enough to get so personal with a room full of strangers.

My ticket into the event as an attendee.

For those who don’t know what I’m talking about, the name of the event pretty much speaks for itself. However, to expand, this is essentially a ticketed touring open mic show run by Dan Misener and his wife Jenna. They’ve been doing this since 2007 after a Christmas trip the year before led them on a journey through Jenna’s old diaries and inspired them to gather friends to do the same. It’s now become a podcast hit with recordings made live during dates that are frequently scheduled across the country. 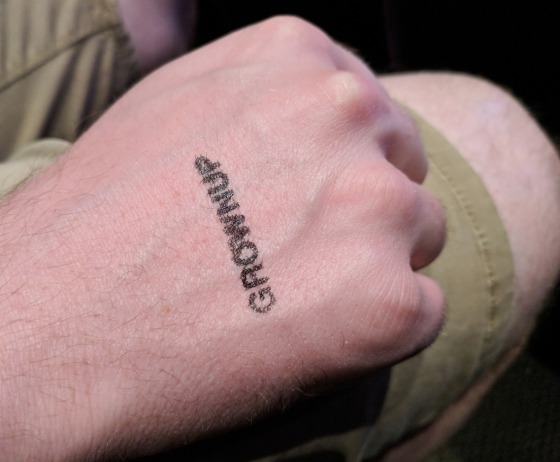 Locals in each city they visit sign up to go on stage for about 5 minutes per person to read something from their past. It could be anything from a short story to a poem, or a letter to a class assignment, or something from one’s journal. Those who enroll have to check in with Dan and Jenna before the big day, so they get a sneak peek of what’s to come. Nevertheless, watching Dan react to each person’s share, I could tell he was just as surprised and delighted as the audience was whenever those big “oh my god” moments happened.

Admittedly though, GRTTWaK isn’t my first foray into this world of teenage and childhood artifacts. In fact, I became obsessed with the film Mortified Nation when I saw it on Netflix a few years back (they now have a Netflix series called The Mortified Guide). The premise was pretty much the same. Yet, the founder of Mortified, David Nadelberg, was based out of the United States and launched his similar endeavour in 2002. I loved it so much that I wanted to be the one to bring it north of the border.

Little did I know that Dan Misener already beat me to the punch. It was my friend who introduced me to GRTTWaK, which really doubled my fun when it came to hearing these stories of adolescent horrors, gut wrenching heartbreak, true happiness, etc. that almost everyone can relate to whether or not they realized it when they were younger.

I guess that’s the irony of it. Things always seemed like such a huge deal as kids. We blew things out of proportion and we assumed we were the only ones to be feeling the way we did. More than likely though, our neighbour or our friend was experiencing it, too. It shows us how caught up in ourselves we can become, but I also think that we sometimes have a depth that goes beyond our years. Many of the things people have shared are so insightful and introspective. Others are lighthearted and hilarious.

What I do think is important to remember is that, whatever it is we have in our history, whether it’s good or bad, we’ve come through it. We can look back and learn from our pasts and, hopefully, we can have a chuckle at it as well.

I definitely recommend that if you’re located in Canada, register for the GRTTWaK newsletter. You won’t get a ton of emails. You’ll just be looped in on upcoming events that you can attend. Also, be sure to check out the podcast. It’s available through their website, Spotify, Apple, or Google. While each episode of the Mortified podcast delves deep into the share of a single individual (even doing a follow-up with the reader who provides a bit of extra discussion about their story), GRTTWaK episodes are usually about 25 to 35 minutes long and cover multiple brave souls in one sitting. It can lead to a roller coaster of emotions, but it’s worth the ride.

Check out this GRTTWaK episode, posted on August 27, 2017 where my friend Michelle decided to read an original story she penned about a horse family:

If you’re interested in hearing an episode from Mortified, listen to this one about Amy, a first generation kid, growing up in America: