Waffles with the Works

Serving customers and offering catering since 1999, Absolutely Edibles (a.k.a. AE’s on 118th) took a chance by opening their business in what has long been considered a crumbling neighbourhood. They must have known in their gut that it was the right move though. Within the last few years, 118 Avenue has continued to improve with a number of entrepreneurs opting to set up shop along the previously notorious street.

A commitment to healthily prepared foods – creating dishes from scratch with fresh, local and Canadian products where possible – I wasn’t fully aware of the establishment until I truly began delving into the Edmonton restaurant scene this past January. Around for 15 years now, it had eluded me, but I finally decided to venture towards the unknown (as many of us are not apt to do, preferring to stick to the tried and true) because – say it with me now! – I had a Groupon to use.

A view of the small restaurant.

Tables tucked in the corner.

Brick walls and mosaic tables give this place a chalet-like feel. 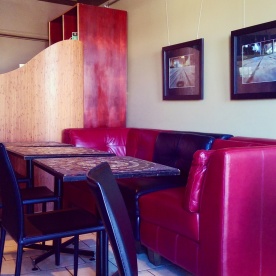 The right side of the establishment. 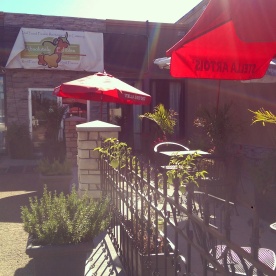 When you drive up to the building, it’s unassuming and small. There is a cute patio space filled with tables and umbrellas that shade from the sun on hot summer days. The interior seats only about 30 people; the decor of slate brick walls, mosaic tiled table tops, a mix of red, green and brown leather upholstered chairs and beige tiled floors, which all look recently updated or, at the very least, well kept, giving the space both a modern and slightly ski chalet-like vibe. It was a quiet Saturday afternoon when my parents and I stopped by for lunch, so we had our pick of spots as well as excellently attentive service from Ryan, the lone front of house staff member that day. 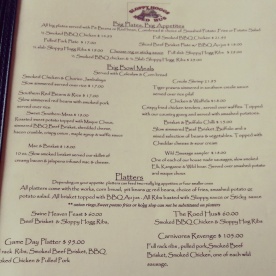 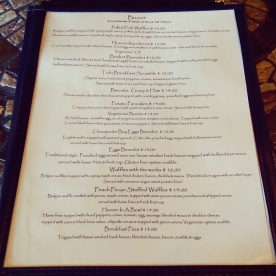 On first impression, I was happy to see that the eatery was not only stylish, but impeccably clean. My second impression was that their menu was completely overwhelming. On weekends, I assume, you receive both their brunch and lunch menus. Plus, you also have the option to order from their sister restaurant, Sloppy Hoggs Roed Hus, which is located in the adjacent building (perhaps somehow sharing a kitchen). Each list was extensive, taking full advantage of the word “fusion” as used in the establishment’s full name. Menu options pull from various influences that run the gamut from Asian (dim sum) to Southern (jambalaya) cuisines. As I found it difficult to concentrate on all the possibilities, I decided to ask Ryan what his recommendations were. Ultimately, I went with the Pulled Pork Waffles, my mom chose the Waffles with the Works and my dad ordered the AE’s Classic Club.

What Absolutely Edibles lacks in terms of physical space, they certainly make up for when it comes to portion sizes! The plates, especially the two from the brunch menu, were brimming with food enough to feed at least two people each.

My dad raved about the Chicken Cacciatore Soup that came as a side to his sandwich. The tomato-based soup looked incredibly rich, thick and full of chicken and veggies, and the sandwich’s focaccia bread was stacked high with three meats – bacon, turkey and slow roasted ham – cheddar and mozzarella cheese, lettuce, tomato and mayo.

Lollipops with the bill.

The Waffles with the Works was a compilation of two Belgian waffles topped with fried chicken, bacon, cheddar and mozzarella and then drizzled with a spicy maple cream. I tried a couple of bites out of the approximately four or five large pieces of chicken and was met with a crispy, juicy, but not greasy meat. I couldn’t really tell that the maple cream was spicy; however, I always enjoy a mix of savoury and sweet profiles. Pulled pork has become one of my preferred foods to eat when I see it on a menu (probably because I never make it at home), so I couldn’t pass up the Pulled Pork Waffles. The pork is smoked in-house and layered with the same spicy maple sauce, bacon and cheddar and mozzarella as my mom’s dish. It’s then finished off with a “blendmore” waffle sauce, two sunny side up eggs and a bit of maple syrup. If indulgent is what you want, that is exactly what you’ll get when you dine at AE’s. The only downfall of an otherwise fantastic dish was that the sauce smothered pull pork made the waffles soggy fairly quickly. Therefore, instead of having crisp and airy waffles, it became more like a mush with amazingly tasty shredded meat. Next time, instead of leaving everything piled directly on my waffles while I dine, I’ll probably shove everything to the side to avoid that. The two waffle plates also came with large sides of sweet potato fries (the Works was supposed to be covered in cinnamon sugar, but it didn’t taste like it), some aioli for dipping as well as a cup of fruit (this wasn’t mentioned on the menu).

A positive outcome of eating here is that for about $55 for three people (tax and tip included, no drinks), you will not only leave completely full, but you’ll also likely have leftovers to last you at least one more meal. In less than two hours, Absolutely Edibles became my father’s new favourite restaurant. He has even gone back twice more with different friends who were all equally impressed. I think this is where the establishment has found its success – word of mouth recommendations from trusted friends and family. I know I would not only tell people to go, but I’d make sure that they bring me with them whenever they do! 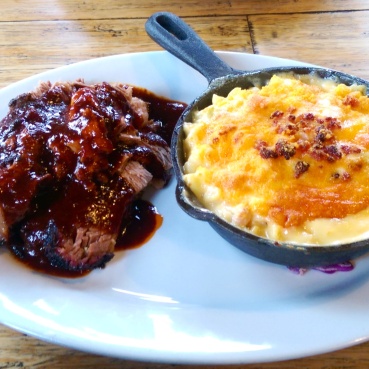 My Mac & Brisket at Sloppy Hoggs. So good! 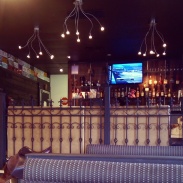 The bar and the large booths at Sloppy Hoggs. It definitely has a country feel. 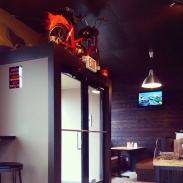 My dad’s Brisket & Buffalo Chili with cornbread at Sloppy Hoggs.

If you have a chance, I suggest that you also check out Sloppy Hoggs Roed Hus, situated around the corner, because the food is just as good and the portion sizes are equally as generous. It’s also a great place for larger groups as most of the tables can seat about 6 to 8 people, maybe even more. The service is top notch, too.